The Waterton Parkland sits at the junction of two unique topographical features: the mighty Rocky Mountains and the undulating grasslands. This Natural Region holds many rare plant species, alongside important breeding grounds for waterfowl.

AWA’s Waterton Parkland area of concern encompasses 472 km2 in southwestern Alberta, just east of Waterton Lakes National Park. What makes this area so spectacular is that it is the junction of two unique topographical features: the Rocky Mountains and the Grasslands. The mountains of the continental divide rise abruptly out of undulating grasslands, almost completely without the classic foothills – typical in most intervening areas between mountain and prairie. As a result of this crossroads, this relatively small area boasts a unique composition of prairie and mountain species.

Roughly 0.6% of the Waterton Parkland area is formally protected as the Police Outpost Provincial Park (2.8 km2). The remainder of the Parkland area is either voluntarily protected under conservation easements, or exists as unprotected private lands or public lands within Alberta’s White Area. The White Area holds number of grazing leases that require special permission to access the area’s for recreation.

Currently, the entirety of the Blood Indian Reserve no. 148 falls within AWA’s Waterton Parkland area of concern. 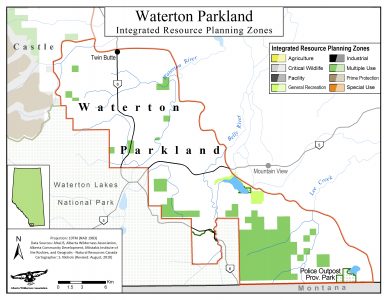 Protected Areas
The protected area of the Waterton Parkland, the Police Outpost Provincial Park, is managed under the Provincial Parks Act. While Provincial Parks are typically managed to conserve their natural heritage, they are also in place to provide ample opportunity for tourism and recreation.

Municipalities
A portion of the Waterton Parkland area of concern includes voluntarily protected private lands, known as conservation easements, which fall under the direction of the Alberta Land Stewardship Act. Conservation easements involve stewardship for lands and waters on private property, while remaining under private ownership. These easements are typically tied to the land in perpetuity, so that future landowners inherit responsibility for the increased land and water protections.

The Municipal District of Pincher Creek, encompassing the northernmost portion of the Waterton Parkland, is managed using the Municipal Development Plan (Draft, June 1997).  This plan aims to conserve land for agricultural purposes, thus protecting the buffer zone surrounding the national park from development.

Public Lands
The remaining lands within the Waterton Parkland area are managed under the provincial acts and policies pertaining to the White Area, which is managed primarily for agriculture and settlement. Relevant acts and policies include: the Public Lands Act, the South Saskatchewan Regional Plan and the historical Integrated Resource Plans.

The Waterton Parkland can be found east of Highway 2 as it heads southward towards Montana, and can be accessed via Range Road 270 stemming south from Highway 501. The closest towns are Beazer and Carway, to the North and to the East, in addition to the Waterton town site located within the Waterton Lakes National Park. 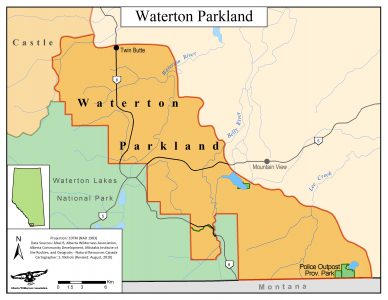 The Waterton and Belly Rivers are the two major regional drainage systems that empty into the Oldman River Basin, which in turn, empties into the South Saskatchewan River Watershed heading west to Hudson Bay. The Belly River originates in Montana and crosses the US-Canada border near Chief Mountain. The Oldman River Basin holds significance for humans and wildlife, as the it provides significant freshwater contributions for communities downstream, critical habitat for wetland species (e.g. westslope cutthroat trout), and cultural significance for Indigenous communities who have long-inhabited the area.

The geological history of the Waterton Parkland area takes heavy influence from the formation of the Rocky Mountains. Prior to formation, the region was covered by a thick layer of sedimentary rock, accumulated under the sea over a period of 1.5 billion years. The Rocky Mountain ranges then began to form around 140 million years ago, as a result of the collision between crustal plates; the west-coast continental shelf moved northeast over underlying granite and gneiss, causing its upper layers to accordion, break and fold into thrust sheets. This thrust faulting is the process in which large slabs of rock push over each other, resulting in the distinct strata of the Rocky Mountains. The Lewis thrust fault can be attributed for the formations we see in the Waterton Parkland region. 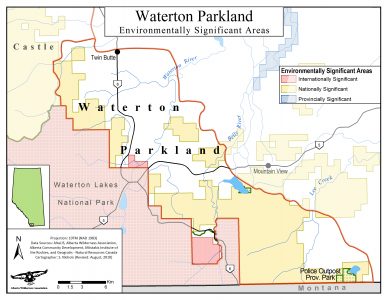 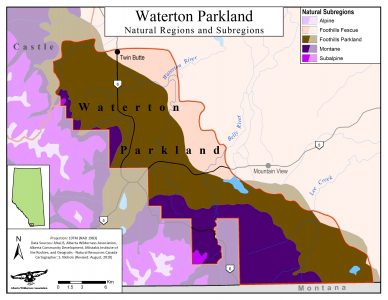 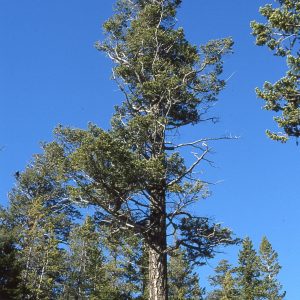 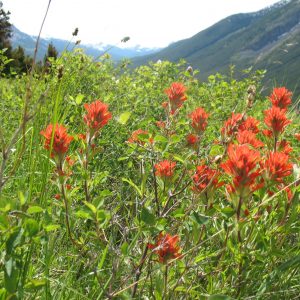 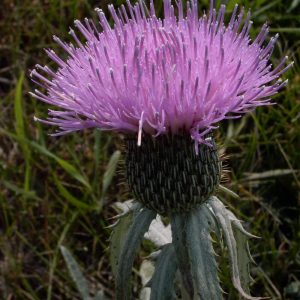 The Waterton Parkland is home to critical grizzly bear habitat, providing refuge for bears under the ever-encroaching threat of habitat fragmentation and grizzly-human encounters. The Waterton Parkland area of concern falls under the Bear Management Area 6 (BMA 6) of the 2008-2013 Grizzly Bear Recovery Plan. Other large mammals within the area include coyotes, mule and white-tailed deer.

The lush wetlands of the Waterton Parkland are also well-known for their bird populations, including sandhill crane, American bittern, marsh wren, black-headed grosbeak and at-risk populations of trumpeter swan. The waters of the region are also home to populations of bull trout, designated as under special concern by the Committee on the Status of Endangered Wildlife in Canada (COSEWIC). The Belly River is also within the historical distribution of the now threatened westslope cutthroat trout. It is expected that damming is to blame for the widespread losses of westlope populations in the Waterton region (Mayhood, 2000). 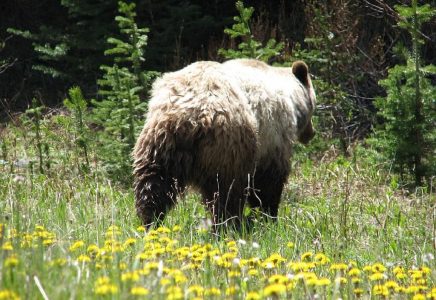 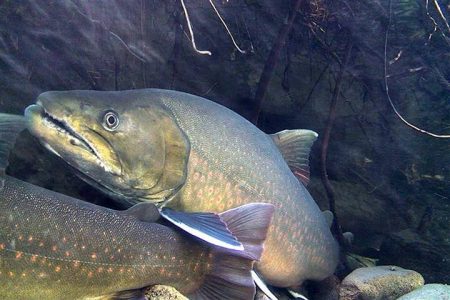 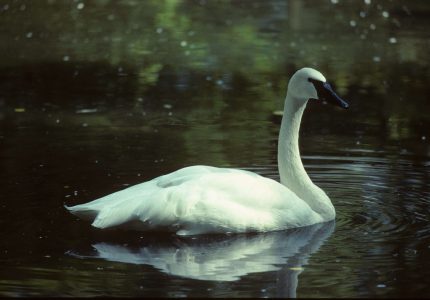 Indigenous Peoples have used the area for approximately 10,000 years, since the retreat of the glaciers. Currently, the entirety of the Blood Indian Reserve no. 148 falls within AWA’s Waterton Parkland area of concern. This reserve falls under the jurisdiction of the Kanai (Blood) First Nations of the Blackfoot Confederacy.

Police Outpost Provincial Park, along the shores of Outpost Lake, offers a number of day use and camping opportunities. Common activities within the Provincial Park include canoeing, hiking, cross country skiing, fishing, and birding.

As the remainder of the Waterton Parkland region is within the White Area, recreationists require special permission to enter onto grazing leases to hike.

The health of the regional ecosystem is affected by development of areas surrounding Waterton Parkland. Ranchlands abutting the national park has traditionally created a buffer zone of diffuse human use, extending animal habitat and sheltering the Park from high impact human activities.  However, a growing market for residential and recreational property is threatening to minimize this buffer area and reduce the protection that it provides. AWA supports the protection of Parkland habitat under the privately-managed conservation easements, and maintains that high-intensity recreational developments are inappropriate in this underrepresented Natural Region

While some of Alberta’s natural areas, such as the Rocky Mountains, are relatively well protected, many of Alberta’s Natural Regions – such as Grasslands, Parkland and Foothills – are poorly represented in the current network. As of 2018, only 0.5 percent of the Parklands Natural Region is protected in Alberta, with the provincial goal of increasing this to only five percent. AWA believes that achieving representative protection is possible, and indeed, necessary.

June 2019
Nature Conservancy Canada (NCC) announces a new conservation easement for the Hansen Ranch, protecting over 900 acres of parkland habitat. The new conservation easement ensures that the landscapes within the Hansen Ranch will be managed sustainably, with provisions to ensure that if sold, the Ranch will never subdivided and the wetlands within the area will never be drained.

2017
AWA writes to the Oldman River Regional Services Commission in opposition to the subdivision and development of the Heritage Ranch proposal within the Waterton Parkland region by 1958612 Alberta Ltd. AWA’s opposition is derived from the critical grizzly bear and native bull trout habitat that is found within the region, that would be heavily disrupted by the development of “rustic recreational residences”.

April, AWA writes to the Appeal Board Secretary of the Oldman River Regional Services Commission to oppose the development of the Police Lake Ranch and Retreat.

2015
Cardston councillors vote against the development application for the Police Lake Ranch and Retreat. AWA and the landowner group were pleased with the decision, a win for the environment and local people.

2014
Cardston County Council approved rezoning land adjacent to the Police Outpost Provincial Park and Outpost Wetlands Natural Area from ‘Agriculture’ to ‘Rural Recreation’. This enables developers to apply for a development permit to build anything under ‘permitted uses’ or ‘discretionary uses’ guidelines of the Rural Recreation land use description. Boundary Creek Landowners Group forms with the goal of preserving and protecting agricultural land of Boundary Creek through wise succession planning, land conservation, and active opposition to large, commercial development proposals. They file an appeal to the Court of Queen’s Bench decision. AWA supports the group.

2012
June, AWA writes a letter of concern to Cardston County, concerning a proposal by LDS church to establish a large youth camp in the Boundary Creek area. The proposals are denied.

Shell submits a reclamation certification application to Alberta Environment and Sustainable Resource Development (AESRD) for the reclamation of the Waterton 9 site.

2008
The Chief Mountain Study (CMS), an assessment of the potential cumulative effects of land use in the Waterton Parkland and surrounding regions, reveals key findings which include:

2006
Alberta government announces three year suspension of the spring grizzly bear hunt. Decision is in no small part due to outpouring of opposition from Alberta public, and considerable media coverage. AWA congratulates Minister David Coutts on this decision, but stresses that habitat loss is the number one issues affecting Alberta’s grizzlies, and no recovery will be possible until this is addressed. In a subsequent Calgary Herald on-line poll, 85% of readers agree with the hunt suspension.

2005
David Coutts, Minister for Sustainable Resource Development, ignores the recommendation of recovery team to suspend the spring grizzly bear hunt, and announces that 73 licences will be issued this spring. A ministerial news release refers to a “conservative approach” to the hunt, and officials cite “anecdotal evidence” that the grizzly population is healthy enough to support a hunt. There is strong opposition to the hunt from environmental groups, Alberta public, scientists and opposition politicians. 10 bears are killed in the spring hunt.

1979
Waterton Biosphere Reserve is designated by UNESCO (United Nations Education Scientific and Cultural Organization) as part of the Man and the Biosphere Program. Waterton is Canada’s second biosphere reserve and the first with a national park at its core. The biosphere reserve program is entirely voluntary, as the reserves themselves are voluntary cooperative areas. Biosphere reserves are organized into three zones– a legally protected core area, an adjacent buffer zone with activities that are compatible with conservation objectives, and a transition zone or “area of cooperation” where sustainable land use is practiced. Beyond the core, the extent of Biosphere Reserve is not well defined. While the National Park is at its core, the buffer and transition zones are not clearly delineated. The goals of Biosphere Reserves are conserving biological diversity, promoting sustainable use and logistic support.

1959-1978
Shell operates a well (Waterton 9) to the east of the Waterton Lakes National Park, within AWA’s Waterton Parkland area of concern. Shell abandons the well in 1978.

1800s
The Northwest Mounted Police establish a police outpost in the area in order to “bring law and order to the West”.

The Waterton Parklands area is used by whiskey runners as a trade route between the Canadian and United States borders.

Pre-Contact
Indigenous Peoples have used the area for approximately 10,000 years, since the retreat of the glaciers. Waterton Parkland is the traditional home of the Blackfoot First Nation, consisting of the Kainai (Blood Tribe), Siksika and Piikani. Currently, the entirety of the Blood Indian Reserve no. 148 falls within AWA’s Waterton Parkland area of concern.

Update: Carnivores and Communities in the Waterton Biosphere Reserve

Wild Lands Advocate article, February 2013, by Nigel Douglas. If you were making a list…