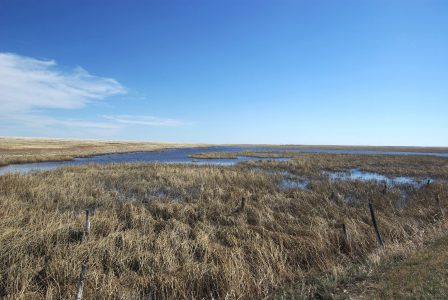 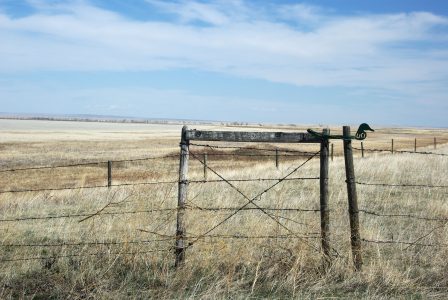 AWA’s vision for Pakowki Lake is that the area be formally recognized for its national environmental significance with legislated provincial protection. The area should be managed primarily for conservation purposes so as to maintain its natural habitat, wildlife populations, and biodiversity for future generations.

AWA’s Pakowki Lake area of concern encompasses 1,554 km2 of grasslands in southeastern Alberta, and is located just north of Milk River-Sage Creek and west of the Cypress Hills. An area of national environmental significance, AWA’s Pakowki Lake Area of Concern surrounds the large, intermittent lake itself, as well as the surrounding prairie uplands and a large sand dune–wetland complex, including extensive bulrush marshes.

Pakowki Lake is an important staging area for migrating shorebirds and provides a nesting area for birds that occur in few other places in Canada. The area also contains important for the rare and uncommon plants found in the sand dune and wetland habitats. Additionally, there are a number of endangered species live in the Pakowki Lake region, which includes the greater sage-grouse, a species that has been federally listed as endangered since 1998.

The majority of the area within AWA’s Pakowki Lake area of concern consists of public lands, holding no formal protection under provincial or federal status. Public lands include the Pakowki Sandhills, which are partially held under grazing leases.

While Pakowki Lake isn’t formally protected by the provincial or federal government, it is designated an Important Bird Area (IBA). A site is recognized as an IBA only if it meets particular criteria, based on the occurrence of key bird species that are vulnerable to global extinction or whose populations are otherwise irreplaceable. Selecting an area as an IBA is a way of identifying it as a priority for conservation; however, it does not convey any legislated protective status. The International Union for Conservation of Nature (IUCN) has classified Pakowki Lake as a Category IV Habitat/Species Management Area, meaning it should be managed mainly for conservation of habitats and biodiversity.

The remaining areas within the Pakowki Lake region are privately owned, including the hamlet of Manyberries and other privately owned parcels of cultivated land.

The public lands within AWA’s Pakowki Lake Area of Concern are managed under the provincial acts and policies pertaining to the White Area, which is managed primarily for agriculture and settlement, and to an extent for natural resources, ecological services and recreational opportunities. Relevant acts and policies include: the Public Lands Act, the South Saskatchewan Regional Plan and the historical Integrated Resource Plans.

AWA’s vision for Pakowki Lake is that the area be formally recognized for its national environmental significance through legislated protection. The area should be managed primarily for conservation purposes so as to maintain its natural habitat, wildlife populations, and biodiversity for future generations.

AWA’s Pakowki Lake area of concern encompasses 1,554 km2 of grasslands in southeastern Alberta. Pakowki Lake is contiguous with two of AWA’s other Areas of Concern: Milk River-Sage Creek and Cypress Hills. The only municipality within the Pakowki Lake area is the hamlet of Manyberries, which can be accessed from Highway 61 via Highway 889.

Pakowki Lake has internationally significant shorebird and waterfowl habitat, and was designated an Important Bird Area in the early 2000s to identify it as a globally important conservation priority. In addition to this, Pakowki Lake is listed by Bird Studies Canada and Bird Life International as globally significant for congregatory species and waterfowl concentrations, and nationally significant for congregatory species and shorebird concentrations. The lake is a major stop on the western flyway. 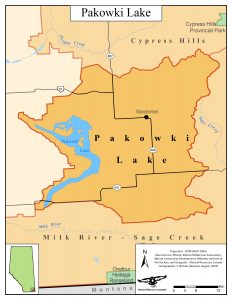 While Pakowki Lake is a sub-basin of the larger South Saskatchewan River watershed, the sub-basin itself is an endorheic basin, or basin with no contributing outflows. Instead of flowing out of the sub-basin, water will either seep into the soil or evaporate. The only inflow channel into Pakowki Lake is Etzikom Coulee, which is an impressive glacial spillway channel. The lake is fed only by intermittent streams, and flows out only under extremely high water levels, when it flows south to the Milk River.

Pakowki Lake sits in a shallow dish of alkali (or basic) substrate – a small amount of water therefore results in a large surface area. The surface area varies from year to year – in 1996 Pakowki Lake covered 109 km2. The lake is intermittent with a mean depth of 1.2 metres.

The striking channels of Etzikom Coulee, Pakowki (or Pendant d’Oreille) Coulee, and others of the region were carved by large rivers of glacial meltwater from the retreating continental glacier. Huge lakes of water were held between the ice sheet and the higher lands to the west. With the glacier blocking the eastward flow of waters north of Cypress Hills, the waters of southern Alberta flowed southeast and south into the ancient Milk River, a much larger river then.

One of the more distinctive geological features of AWA’s Pakowki Lake Area of Concern are the Pakowki Sandhills. The Sandhills consist of both parabolic and longitudinal dunes that can reach up to seven metres in height. The fine to medium grained sand is the result of Aeolian (wind-driven) processes, with the mixtures of sand and gravel in the area resulting from glacio-lacustrine deposits. 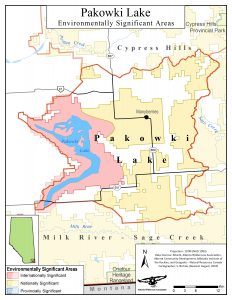 Pakowki Lake lies within the Dry Mixedgrass and Mixedgrass Subregions of the Grassland Natural Region. 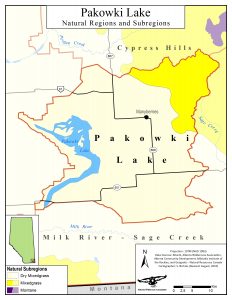 Pakowki Lake has achieved international significance as an Important Bird Area (IBA) as a result of its extensive marshes and open water areas providing suitable habitat for many migrating waterfowl and shorebirds. The area is reported to host 168 different species of birds, including stilt sandpipers, American avocet, Wilson’s phalaropes, great blue herons, and ring-billed California gulls (Nature Alberta). Nesting grounds for rare species such as black-necked stilt and white-faced ibis can be found within the area, as well as dancing grounds, otherwise known as leks, for endangered greater sage grouse.

The gold-edged gem is a small moth that is listed as endangered under Canada’s Species at Risk Act (April 2006). It is known from only two small populations in Canada and two in the United States. Pakowki Lake is one of four sites in Alberta in which this species has been found. Habitat requirements include active dunes or blow-outs with populations of its sole larval host plant, Prairie Sunflowers. Large-scale decline in active dune habitat over the past 100 years has likely resulted in a corresponding reduction in the moth. Habitat loss has occurred because of stabilization of active dunes by both native and introduced vegetation and by overgrazing of its larval host plant. This severely impacts small, isolated populations of the moth. The closest population of the moth in the United States is about 1,200 km to the south in Colorado, so immigration of individuals into the Canadian population is not possible.

Other species that inhabit the area include pronghorns and the rare plains hognose snake. 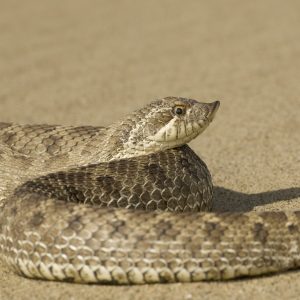 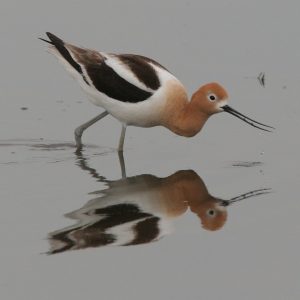 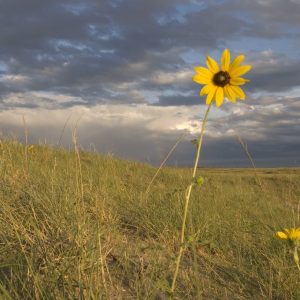 Prairie sunflower, the only known larval host plant of the gold-edged gem. Photo © A. Teucher

As a large part of the area surrounding Pakowki Lake is composed of agricultural leases and privately-owned lands, recreational activities are limited. However, part of the lake has been designated as a Provincial Bird Sanctuary, allowing birders to enjoy the area’s incredible natural diversity. Given the status as a Provincial Game Bird Sanctuary, hunting of game birds around the lake is prohibited except with a special permit.

Despite Pakowki Lake’s recognition as an Important Bird Area (IBA), the area has not received any formal protective status. Its only current status is as a Provincial Bird Sanctuary; however the site is not listed under Canada’s list of migratory bird sanctuaries and currently holds very few protections.

AWA’s vision for Pakowki Lake is that the area be formally recognized for its national environmental significance with legislated provincial protection. The area should be managed primarily for conservation purposes so as to maintain its natural habitat, wildlife populations, and biodiversity for future generations.

In October, the Draft South Saskatchewan Regional Plan is officially unveiled. The draft does not address conservation in native grasslands in any specific way and no legislated protection is proposed for grassland areas despite housing a significant number of species at risk in southeast Alberta.

In July, AWA takes the Minister and Assistant Deputy Minister of Alberta Tourism, Parks and Recreation on a tour of the Pakowki Lake and Milk River-Sage Creek areas of concern, introducing them to Alberta’s southeastern grasslands, and the many concerns AWA has for the area and its management. Also participating in the tour are representatives from the Prairie Conservation Forum.

Birders spot a black-headed gull on the northwest arm of Pakowki Lake – the first time this species has ever been seen in Alberta.

A wet year leads to unusually high water levels in the lake, resulting in high numbers of nesting bird populations. Numerous pelicans and Clark’s Grebes are observed nesting along roads.

In July, a colony of gold-edged gems is found in the Pakowki Lake sand dunes. This is one of four sites in Alberta where this endangered species has been found.

A dry winter and chinook winds prevent a frost seal from forming on Pakowki Lake. As a result, all spring precipitation goes straight into the ground, leading to Pakowki Lake going almost completely dry; this phenomenon is something not seen since the late 1980s.

A water quality sampling program is implemented by the Water Sciences Branch of Alberta Environmental Protection to determine whether the physical, biological, and chemical characteristics of the lake influence the timing and severity of avian botulism outbreaks.

Clostridium botulinum type C, the most frequent cause of avian botulism, is confirmed in Pakowki Lake. It is estimated that more than 200,000 birds die during the most severe outbreak of avian botulism ever recorded in Pakowki Lake (104,000 green-winged teal, 40,000 northern pintail, 20,000 northern shoveler and 16,000 mallards make up 90 percent of the losses). A total of 100,825 carcasses are collected during efforts to control the outbreak. Continuous clean-up operations from July 17 to October 18 involve 54 people and require 4,800 person-hours of work.

The Pakowki Lake Working Group is formed, with the goal of investigating and implementing methods of limiting avian mortality at Pakowki Lake.

A single white-faced ibis is photographed at Pakowki Lake – the first authenticated sighting of this species in Alberta.

The Government of Alberta gives permission for natural gas to be exported from the Pakowki Lake area to Butte, Montana.

The international (United States/Canada) Treaty to Protect Migratory Birds is signed by the Dominion Government.

In order to protect North American waterbird species, which were decimated through uncontrolled commercial hunting for the food and feather trade in the late 1800s and early 1900s, Canada protects Pakowki Lake, along with 13 other Alberta lakes and 12 Saskatchewan lakes (Northern Prairie and Parkland Waterbird Conservation Plan 2004). A federal ministerial order approves federal reservations on “all the vacant quarter-sections immediately adjoining the following lakes in Saskatchewan and Alberta, with a view to the future establishment of permanent bird reserves.” The order withdraws 14 lakes in Alberta from settlement, many of which are subsequently established as reserves, including Pakowki Lake. Federal Migratory Bird Officers and provincial Game Guardians are hired to administer them (Fish, Fur and Feathers, Chapter 8).

The Blood First Nation, well-known traders of both the American Fur Company and the Hudson’s Bay Company, move south into the Pakowki Lake after their territory is taken over by European settlers.