Located in the distant uplands of northwest Alberta, Cameron Hills is a distinctive and secluded subartic landscape with striking geological features and an abundance of wildlife.

The whole of Cameron Hills is unprotected public lands that are being utilized under a multiple use designation primarily for the exploration and development of oil and gas. PHOTO: © C.WEARMOUTH

AWA’s Cameron Hills Area of Concern is a secluded and biologically rich wilderness in northern Alberta, adjacent to the provincial border of the Northwest Territories. Directly west of the Wood Buffalo National Park, Cameron Hills is 309 km2 of boreal forest uplands, known for its striking and unique glacial flutings that are carved into the landscape. This wilderness encompasses multiple Boreal Subregions, which host a unique ensemble of bird species in addition to providing vital habitat for threatened Woodland caribou. 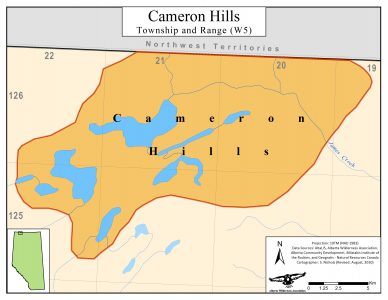 Cameron Hills is situated in the remote and sparsely populated northwest region of Alberta. The small settlement of Indian Cabins is the closest Albertan community aside from the hamlet of Enterprise, and the Hay River Dene Reserve across the provincial border in the Northwest Territories. A considerable amount of the Cameron Hills landscape has been subject to surface disturbances by the petroleum industry with exploration and developments generating an increasingly fragmented and degraded landscape.

The whole of Cameron Hills is unprotected public lands that are being utilized under a multiple use designation primarily for the exploration and development of oil and gas.

Cameron Hills was at one time managed under the Bistcho Lake / Cameron Hills Draft Resource Management Plan (April 1994) which has the intent to protect permafrost, and woodland caribou and their habitat. The plan recognized the need to sustainably manage natural features such as landforms, vegetation, wildlife, and climatic features in the face of growing economical demand.

Land-Use Framework
Once completed, Cameron Hills will be managed under Alberta’s Lower Peace Land-use Framework with the provincial government committing to “addressing cumulative impacts on the environment and to managing social, economic and environmental realities and priorities in a holistic manner” (Alberta Parks 2018).

Public Lands
Cameron Hills is located within Alberta’s Green Area for public lands which are managed for recreation, ecosystem significance and services, in addition to natural resources. Public lands in the Green Area can have government granted dispositions for the extraction and development of natural resources such as forestry and petroleum. Management and administration of public lands within Alberta is overseen by two regulatory bodies: the Alberta Energy Regulator and Alberta Environment and Parks. Public land dispositions are regulated under two pieces of legislation within the province of Alberta: the Public Lands Act and Public Lands Administration Regulation. Other relevant provincial legislation includes, but is not limited to Recreational Access Regulations, and the Environmental Protection and Enhancement Act (Alberta 2014).

Bison Management
Wood bison are classified as Threatened under the Species At Risk Act, in addition to some herds being designated as Endangered or as Subject Animals under Alberta’s  Wildlife Act. As per the Government of Alberta, “Free-roaming wood bison found in northwestern Alberta’s Bison Protection Area are considered to be wildlife, and receive protection under the Wildlife Act. It is illegal to hunt, harm, or traffic in the bison within this area without a licence”.

The Cameron Hills wilderness is situated within the Alberta’s Bison Protection Area which was designated in 1995, and spans an area of 40,000km2. This protected area includes AWA’s Hay-Zama Area of Concern, Bistcho Area of Concern, in addition to the northern portion of AWA’s Chinchaga Area of Concern. Alberta’s Bison Protection Area extends from the far northwest corner of the province down south until the Chinchaga River. The Government of Alberta carefully monitors and controls  free-roaming bison herds found in the Bison Protection Area, in addition to those herds found in and around Wood Buffalo National Park as to protect disease free herds and domestic livestock from contracting tuberculosis and brucellosis.

AWA believes that the Cameron Hills should be formally protected and designated as a Wildland Provincial Park. Similar to the multi-stakeholder committee of Hay-Zama, AWA believes that Cameron Hills requires management derived from multiple stakeholder collaboration. Potential land uses require careful consideration in order to maintain the natural integrity of this sensitive landscape, and to determine if these activities are compatible with local conservation objectives. A transparent process based on consensual decision making that considers economic activities, environmental sensitivities, and cultural priorities will benefit the long term conservation of the Cameron Hills.

AWA’s Cameron Hills Area of Concern covers approximately 309 km2 of boreal forest in the far northwest region of Alberta, directly south of the Northwest Territories. This area is relatively uninhabited, with only the small settlement of Indian Cabins being the closest established community. Mackenzie Highway is the main access route. 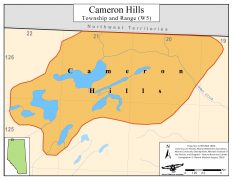 Cameron Hills resides within the Hay River Basin located in northern Alberta. Water from this basin flows through the landscape and eventually drains into the Mackenzie River, which in turn, drains into the Arctic Ocean. Thruston Lake, James and Cameron River belong to the collection of small lakes, rivers and wetlands areas that dissect the landscape and provide important habitat and staging areas for many waterfowl species.

The Cameron Hills are the erosional remnants of glaciers, reaching an elevation of approximately 400 to 500 m above the surrounding landscape. These uplands are flat-topped hills with escarpments that are dissected by numerous small streams.
The Cameron Hills are also well-known for their renowned glacial flutes, long ridges created by the movement of a glacier around boulders. As glaciers move across the landscape, rocks mix into the ice and will eventually settle at the bottom of the glacier, causing scraping against the earth’s surface as the glacier expands. Clay, silts, sand, cobbles and boulders make up the glacial till that was deposited during the Quaternary period. Organic deposits of undifferentiated peat (woody to fibrous muck) are also common to this area, typically underlain by fine-grained, poorly drained glaciolacustrin deposits(Paulen and Plouffe 2009).

Cameron Hills is a nationally significant area because of the expansive glacial fluting across landscape; the glacial fluting in Cameron Hills is by far one of the best examples of this topographical feature in Canada. The distinctive plant communities of Cameron Hills also contribute to the environmental significance of this area; the area’s forests and wetlands provide essential habitat for many northern wildlife species, including threatened Woodland caribou. 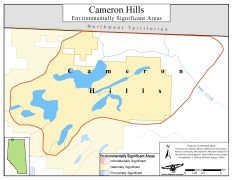 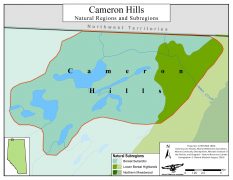 This region is characterized by black spruce bogs with discontinuous permafrost on elevated plateaus. Lodgepole pine and Alaska birch are also found within this region. In lower lying areas, collapsed scar bogs are commonly found which are covered by sheathed cotton grass, and peatmosses. Cooler climates within this area result in a considerably slow and restricted growing season. Low temperatures, water-saturated organic and moss layers, in addition to lower sun angles, all contribute to the development of permafrost which also restricts plant growth. Shrub layers generally consist of Labrador tea, cloudberry and green reindeer lichen.

Birds
Cameron Hills forests and wetlands are also home to many bird species such as Trumpter swans, bald eagles, osprey, and herring gulls. 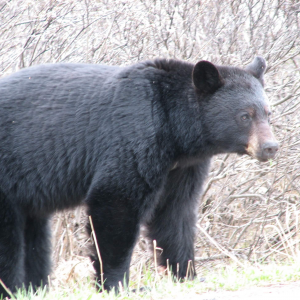 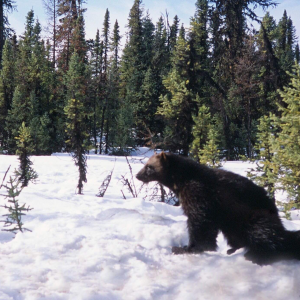 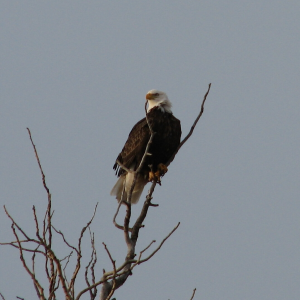 Cameron Hills is traditional territory for the Dene Tha’, an Athapaskan speaking First Nation which lived in northwest Alberta, northern British Columbia, and the Northwest Territories. The Dene Tha’ had a nomadic way of life, creating only small settlements in the early 1900’s.

Jackfish Point Reserve and Bistcho Lake Reserve are the closest permanent residents to the Cameron Hills region, however many grave sites and historical features are scattered across the landscape.

The Cameron Hills wilderness resides above large oil and gas reserves in far northwest Alberta; these reserves have already been subjected to a tremendous amount of exploration and development. The upland forests, wetlands and subarctic permafrost soils of this region are extremely susceptible to surface disturbances, in addition to negative impact on resident wildlife. Cameron Hills provides important habitat for many wildlife species such as threatened Woodland caribou, with a portion of the Bistcho caribou herd’s range existing within these uplands. This herd is a boreal ecotype that depends on the old growth forests and wetlands of Cameron Hills for shelter, and food resources. Unfortunately, the herd’s population size has been declining due to excessive surface disturbances, habitat loss, and increased predation, all of which are associated with oil and gas activities. Surface disturbances within wetlands and permafrost soils can also affect the capacity and efficiency of these natural systems to serve as carbon sinks.

AWA believes that no new oil and gas developments should be entertained within or in the surrounding landscapes of Cameron Hills. These activities are not compatible with conserving the natural ranges for resident wildlife nor protecting the ecological integrity of this region. Conservation initiatives for caribou will also be crucial to maintaining the biodiversity of this wilderness, as caribou are considered an ‘umbrella species’ within this area.

April 30, 2018
The Minister of Environment and Climate Change Canada releases the first ever Section 63 report under the Species at Risk Act, (SARA), where the Minister found that outside of protected areas, provinces and territories have failed to protect almost all of boreal caribou critical habitat.

November 28, 2017
Letters are delivered to all Alberta MLAs noting the dire situation of caribou and requesting their support to recover this iconic species. Supporters of Alberta’s endangered caribou deliver hundreds of postcards to the steps of the Alberta Legislature today, asking the Premier of Alberta to protect the habitat that these iconic wildlife need. The “Quarters for Caribou” event, organized by the AWA, comes after Alberta misses its 5-year deadline, in October 2017, for producing caribou range plans that protect least 65% undisturbed habitat, the absolute minimum required for caribou to sustain themselves.

October 31, 2017
The federal government reports that the quality of caribou habitat continues to decline across Canada.
In a separate release, the David Suzuki Foundation, Ontario Nature and Alberta Wilderness Association identify critical habitat destruction “hot spots” in the ranges of threatened caribou in Alberta, Ontario and Quebec. The groups call on the three provincial governments to convene Indigenous and stakeholder groups to develop range plans that protect critical caribou habitat. No province or territory has fully met the timeline established in the Recovery Strategy for the development of range plans, due on October 5, 2017.

June 8, 2016
The Government of Alberta makes a historic decision to protect extensive areas of four endangered woodland caribou ranges in its far north. This occurs while the government further jeopardizes the endangered Little Smoky – A La Peche caribou populations in the west central foothills by proposing to restart logging. Alberta Wilderness Association (AWA) welcomes the significant achievement for caribou conservation in the north, and urges better solutions that are available for Little Smoky – A La Peche foothills caribou.

March 2005
The Bistcho Lake/Cameron Hills boreal caribou study is initiated in the Northwest Territories. The study area extends south into Alberta due to the free movement of collared animals between the two jurisdictions. In the NWT, the Cameron Hills has past and existing oil and gas activities, and represents an important area to investigate interactions between boreal caribou and industrial developments.

1997
AWA recommends that Cameron Hills be preserved as a representative wildland in the “Environmentally Significant Areas of Alberta” report prepared by Sweetgrass Consultants for the Resource Data Division, Alberta Environmental Protection.

Late 1980s
Concerns arise about the impact of land use and timber harvesting on woodland caribou and permafrost in the Bistcho Lake/Cameron Hills area.

Early 1980s
Fires change the nature of the northern caribou range, and oil and gas development damages some areas of permafrost.

Mid 1950s
Oil and gas exploration efforts are underway in the Cameron Hills.

Pre-Contact
Cameron Hills is traditional territory of the Dene Tha’, an Athapaskan speaking First Nation which lived in northwest Alberta, northern British Columbia, and the Northwest Territories. The Dene Tha’ had a nomadic way of life, creating only small settlements in the early 1900’s.

Room for Both Jobs and Caribou in Canada’s Forests: New Report

Caribou Habitat Protection Crucial for CeaseFire in War on Wildlife