Rising out of the prairies, the interprovincial Cypress Hills boast the highest elevation between the Rocky Mountains and the Torngat Mountains of Labrador

The 1,996 km2 of the Cypress Hills Area of Concern is located in the southeastern corner of Alberta, straddling the Alberta-Saskatchewan border. The unique geography of the Hills as a high point among the low-lying Canadian prairie has produced rich cultural and ecological heritage. Cypress Hills Provincial Park, alone, hosts 217 species of bird, 38 mammals, five reptiles and four amphibians, among which are rare and endangered species; and the quiet hills, slopes and green coulees surrounding the Provincial Park have been home to families, ranchers and farmers over many generations. Impressive views of relatively undisturbed landscape spread from the highest points looking to the north. To the south, the gentle slopes give way to the Sweetgrass Hills in the distance.

Outside of these protections, the remainder of the Cypress Hills consist of private and public lands within the White Area of Alberta, primarily managed for agricultural development.

Public lands
A 278 km2 buffer area surrounds the Albertan side of the Cypress Hills Provincial Park, designated as ‘the Fringe’ and managed under an Area Structure Plan (ASP). The goal of the ASP is: “To provide an opportunity for development in the Cypress Fringe plan area in a manner that respects the values that created Cypress Hills Park and respects the heritage and ecological landscape of the area.” Public lands are also managed under a number of provincial acts and regulations, primarily directed by the Public Lands Act.

The 1,996 km2 Cypress Hills Area of Concern is located in the southeastern corner of Alberta, straddling the Alberta-Saskatchewan border. The unique geography of the hills – as a high point among the low-lying Canadian prairie – has produced rich cultural and ecological heritage. The Cypress Hills are located south of the TransCanada Highway, along the southernmost stretch of the Buffalo Trail (Highway 41). The town of Elkwater, bordering Elkwater Lake, is located within the Cypress Hills Provincial Park. 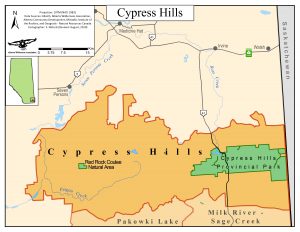 The sensitive nature of the water basins in the Cypress Hills, including Elkwater Lake, has led to the creation of agricultural water co-op and moratoria on future water licenses to effectively manage water use within the area.

The Hills are composed of a thick layer of conglomerate deposited, exposed by meltwater channels along their northern and western edges, also accompanied by glacial debris at the northern edge. Winds during deglaciation also brought moderate and fine-textured loess sediment overtop of the conglomerate.

The Cypress Hills hold national environmental significance due to their high cultural value and the unique habitat they provide for many rare or endangered flora and fauna. The high ecological value is derived from the Cypress Hills’ anomalous physiography, as they tower up to 600 m over the surrounding prairies. 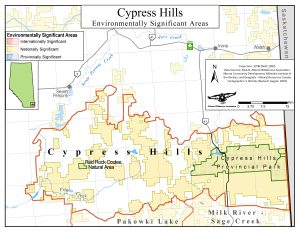 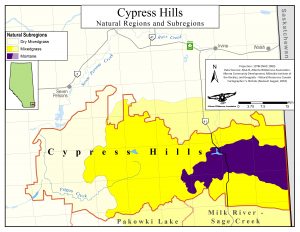 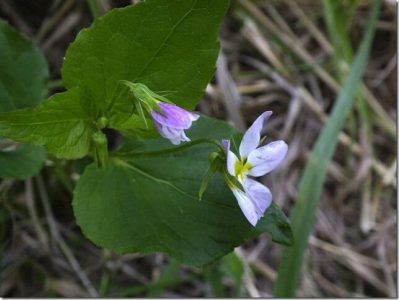 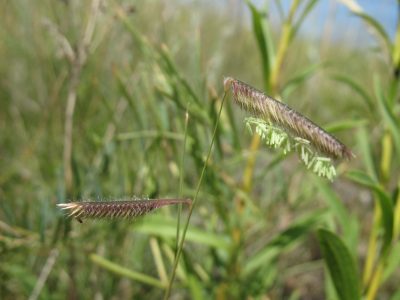 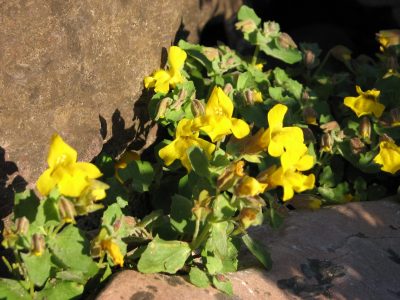 The region holds particular significance for its large mammal species, given that the unique habitat has provided an important vegetative resource. Some mammals, such as elk and moose, were extirpated from the Cypress Hills Provincial Park and have since been reintroduced. The presence of the elk population has caused some controversy within the Provincial Park, as their grazing is in conflict with some priorities in the surrounding agricultural community. Predators, such as cougars, also have a major presence in the Hills. Common small mammals include porcupine, voles, shrews, cottontail rabbit, raccoons, coyotes, red fox, bobcat, striped skunk, and American badger. 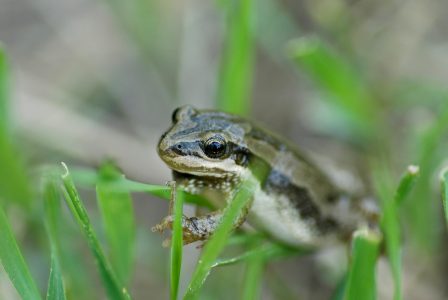 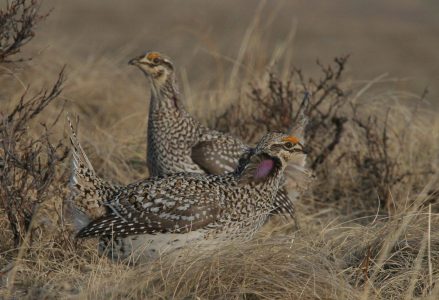 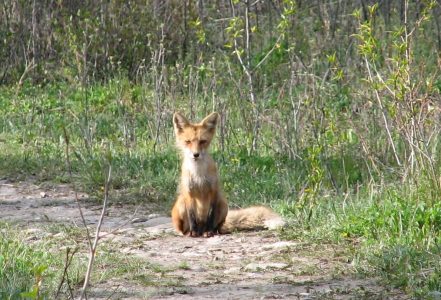 Indigenous Peoples have used and resided among the Cypress Hills for more than 8,000 years.

While AWA supports green energy alternatives and is not opposed to wind energy, we assert that wind farms are an industrial land-use and not appropriate in endangered native prairie grasslands or environmentally significant areas. The development of wind-based Power Plants within the ‘Fringe’ of the Cypress Hills threatens the five percent of natural grasslands that remain in Alberta. The current Area Structure Plan (ASP) prioritizes the conservation of high quality native rangelands and the minimization of roads and development. While wind farms would be seemingly in conflict with the ASP, there are not any additional specifications to address wind farm development, and are “compatible” with the plan.

AWA reiterates that the land-conversion necessary to develop the wind farms and their associated access roads involves the further removal of native prairies. These disturbances fragment sensitive grasslands and ushers in invasive species that can out compete the native flora. Native fescue grasslands have never been successfully reclaimed. Once they are destroyed they are gone forever.

2016
The Alberta NDP government invests $239 million in provincial parks upgrades over the next 5 years, with Cypress Hills included for asphalt paving, retaining lake wall upgrade at Reesor Lake, and Comfort Camping in 2016-17, and boardwalk restoration in the next 2-5 years.

2012
Cougars, which are believed to have begun recolonizing Cypress Hills in the late 1990’s are now believed to number 20-40, according to researchers with the University of Alberta. Cypress Hills now “boasts one of the highest densities of cougars ever reported” in North America.

May 2008
The Environmental Impact Statement for NaturEner’s Wild Rose 1 Project is approved. A public open house is planned for 2009. The plan includes 82 turbines, each 80 m tall with 38-m blades. Since the leased land base for the original West WindEau wind farm proposal has not changed, AWA has the same concerns as with the original application. Because the Cypress Hills are an ecological island in the midst of an ocean of grassland, the species that live here are particularly vulnerable, and a protected buffer zone is critical to their continued protection.

September 23, 2007
NaturEner Energy Canada Inc. purchases 100 percent of the shares of Alberta-based West WindEau Inc., the original proponent for the Wild Rose Wind Farm proposal. NaturEner subsequently withdraws the project application because the turbines will be louder than the manufacturer had originally stated, and then re-applies, using the same documentation as for the previous application.

May 2006
AWA attends an open house regarding West WindEau’s wind farm proposal. The event adds little information to those following the company’s plans.

September 2003
The Cypress Hills Elk Management Plan process is initiated to address the issue of elk depredation on agricultural lands outside the park.

1996
A revised management plan is released. In a letter to the District Manager of Cypress Hills Provincial Park, AWA expresses concern in regards to logging, grazing, road access, and other issues not addressed in the management plan. AWA emphasizes the necessity that no interventionist measures be taken with respect to natural environments and wildlife populations until the ecosystem-based management plan can rationalize why intervention is necessary. AWA believes that most of the roads on the plateau should be closed, grazing should be prohibited in sensitive environments, and logging should not be undertaken.

The Cypress Hills Researched Steering Group (CHRSG) forms to act as advisors for the Alberta and Saskatchewan Parks Managers and Alberta Research Centre with regards to the management of the Cypress Hills Provincial Park.

1995
The Government of Alberta begins public consultation for an updated park management plan.

1993
A community-based (non-government) Cypress Hills Advisory Association is formed to work toward consensus on issues involving management of the greater Cypress Hills ecosystem.

1991
In a report entitled “Recommendations Related to a Comprehensive Forest Management Plan for Cypress Hills Provincial Park, Alberta,” consultants recommend that the clear-cutting occurring in the park be discontinued because it is not meeting the park plan’s stated objectives. AWA writes a letter to the  Minister of Recreation and Parks asking him to assure AWA that no timber harvesting permits will be renewed until the management of the Cypress Hills has been given the benefit of a public review.

1987
Under the guise of forest management, a small-scale commercial logging operation in Cypress Hills is approved without any opportunity for public input. AWA suggests that prescribed burns are a better forest management technique and should be considered.

1985
All proposals requested by the Alberta government for parties interested in developing a ski hill and related recreational activities are refused.

1981-2004
Twenty-one formal complaints are registered in Cypress Hills for elk depredation on and damage to agricultural operations.

1981
The Cypress Hills Provincial Park Master Plan is released. The comprehensive plan guides all aspects of park management and brings in policies of allowing hunting and grazing as management tools to maintain range health and control problem wildlife populations.

1976
Elk hunting season becomes established in the park. The portion of the Cypress Hills known as the West Block in Saskatchewan becomes a provincial park.

1970
Premier Harry E. Strom allows the drilling of a natural gas well inside the boundaries of the Cypress Hills Provincial Park.

1968
The manager of Cypress Hills Provincial Park states that elk should not have to compete directly with cattle.

1967
The Cypress Hills Visitor Centre is built. Commercial lumbering operations are terminated. Domestic grazing is allowed to continue. The director of Alberta’s Fish and Wildlife Division argues that there is extreme competition between elk and cattle in the park and that the park should be for wildlife.

1954
The Cypress Hills Provincial Park is expanded and facilities developed.

1951
The Cypress Hills Provincial Park is established in Alberta, encompassing the portion of land known as the Elkwater Block. A warden and an assistant warden are appointed to manage it.

Early 1940s
Cobbles are mined from the Cypress Hills for the war effort. There are reports of hay damage by Elk in the West Block (Saskatchewan side), and by the 1950s, Alberta ranchers are seeking compensation and an open season on elk.

1937
At the request of some Saskatchewan ranchers around the Cypress Hills, the government imports elk from Wainwright Park. The elk spread quickly to the Alberta side.

1930
Control of natural resources is transferred to Alberta and Saskatchewan, putting an end to almost 30 years of federal administration of the Cypress Hills public reserves.

1930s
Development occurs in a subdivision on the shores of Elkwater Lake.

1929
The land beside the south shore of Elkwater Lake is designated Elkwater Provincial Park.

1911-1930
The Cypress Hills constitute a Dominion Forest under the authority of the Canadian Department of the Interior.

1911
The Forest Reserves and Park Act expands the Dominion Forest from 47 to 492 km2, of which 207 km2 lie within Alberta’s border. This area is referred to as the Elkwater Block – it roughly corresponds to the current Alberta portion of the Cypress Hills Interprovincial Park.

1909
Elk are extirpated from the Cypress Hills.

1906
The Forest Reserves Act is passed, establishing a 47 km2 reserve in the area.

1890
The last great plains grizzly is shot in the Cypress Hills.

1886
A fire burns through most of the Cypress Hills. Much of what is left unburned is cut down shortly after the fire.

1883
The Canadian Pacific Railway is extended to Maple Creek. By this time, the bison, and the First Nations who depended on them, are gone from the area.

1876-1881
Sitting Bull and his followers escape to the Cypress Hills after the Battle of Little Bighorn.

1875
The Cypress Hills Massacre leads to the formation of the North West Mounted Police and the establishment of Fort Walsh.

1860s-1870s
Prospectors and whiskey traders come to the Cypress Hills area after the discovery of gold in Montana. These decades are lawless, chaotic times.

1869
An outbreak of smallpox occurs throughout Indigenous communities of the Cypress Hills when a whiskey trader purposefully distributes infected blankets from the United States.

1859
Captain John Palliser comments that the Cypress Hills are “a perfect oasis in the deserts we have travelled.”

1806
William Clark of the Lewis and Clark Expedition (1803-06) shoots a Blackfoot man, an event that creates hostility between First Nations people and traders in the area.

Pre-Contact
Indigenous Peoples have used and resided among the Cypress Hills for more than 8,000 years. The area contains a number of culturally significant sites, including the South Battle creek Site, Stampede Site and a number of important burial sites. The Cypress Hills hold significance for the Métis and Blackfoot Confederacy (Niitsitapi) Peoples.

How Do You Solve a Problem Like Elk in the Cypress Hills?

There’s a Hole in the Bucket