Ninety percent of rural households in Alberta – or about 600,000 people – rely on groundwater for drinking water.

The earth’s water is constantly cycling through the earth’s atmosphere, surface, and sub-surface. Groundwater is water that is stored underground. Of the fresh water available globally, approximately 69 percent is stored in ice caps and glaciers; less than 1 percent is present as rivers, lakes, and wetlands; and the remaining 30 percent is stored as groundwater. 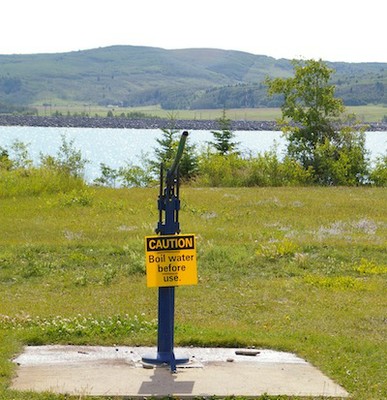 “In the entire water pollution problem, there is probably nothing more disturbing than the threat of widespread contamination of groundwater.… [P]ollution of the groundwater is pollution of water everywhere.”     Rachel Carson, 1962

Despite our heavy reliance on it, we know very little about the quality and quantity of groundwater in this province. In 2005, the Canadian Senate reported that only 20 percent of Canada’s aquifers have been mapped and described the data as “pitiful.” In the February 2007 Rosenberg report, an international panel of experts convened by the Alberta government stated: “The existing network of groundwater monitoring is insufficient to provide reliable information on water quality and water levels and their variability.” They go on to say that “the development and projected exploitation of oil sands and coal bed methane are likely to pose special threats to both groundwater quantity and quality.”

In the Water for Life strategy (2003), the provincial government identified the need to “understand the state of the quality and quantity of Alberta’s ground water supply,” but to date there has been little progress toward achieving this end.

Issues of groundwater stress are beginning to emerge more frequently in Alberta. In “Out of Sight, Out of Mind? Taking Canada’s Groundwater for Granted” (Eau Canada, 2007), Linda Nowlin writes, “When the local groundwater resources were no longer able to meet the needs of a growing population in the Lacombe/Ponoka area of Alberta, a pipeline was built to allow for an interbasin transfer of the treated water. This area of central Alberta is a groundwater ‘hot spot,’ as are areas in northeast Alberta where there is demand for groundwater to produce steam for the thermal recovery of bitumen.”

The Pembina Institute report Protecting Water, Producing Gas, released in April 2007, lists a number of groundwater issues that need addressing in the province:

Fresh Water Use in Oil and Gas Fracking Operations

In a recent ruling, a judge in Rocky Mountain House assessed two $1,500 fines against…

Water for Tomorrow – An All-Party Candidates Forum on Water Issues

Wild Lands Advocate article, December 2014, by David Robinson. The floods of 2013 made Calgarians…

Despite good progress by a multi-stakeholder group in understanding issues around Athabasca River water withdrawals,…