Watersheds are the sum of the streams that gather from heights of land and flow into a common water basin. Sometimes called catchment basins, watersheds are made up of many sub-basins, or tributary basins.

A watershed resembles the venous system of the body as it gathers blood in tiny veins that drain into larger vessels, finally delivering their flow into the heart. How fresh water is managed in individual watersheds is the key to a sustainable water supply. The government of Alberta divides the provinces into seven large watersheds.

“All things are interconnected. Everything goes somewhere. There is no such thing as a free lunch. Nature bats last.”    Ernest Callenbach 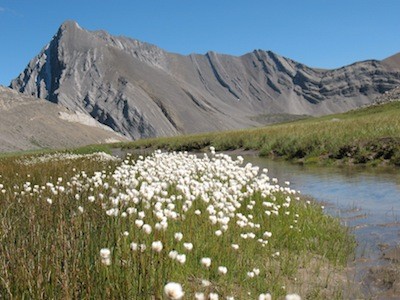 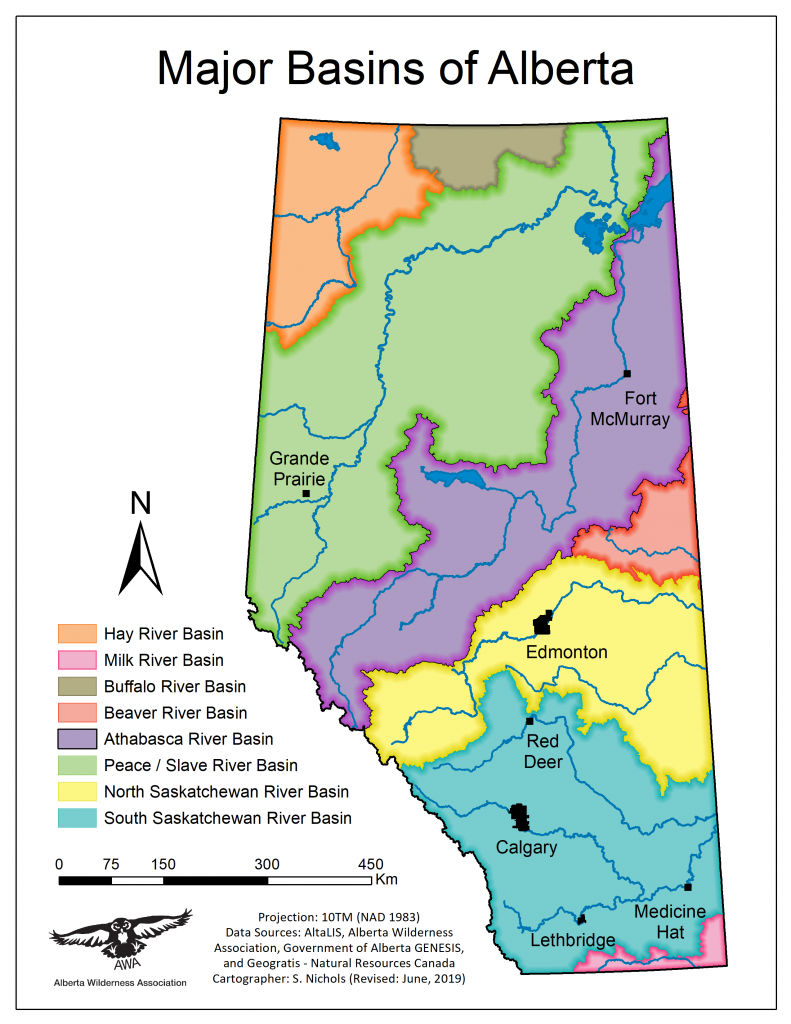 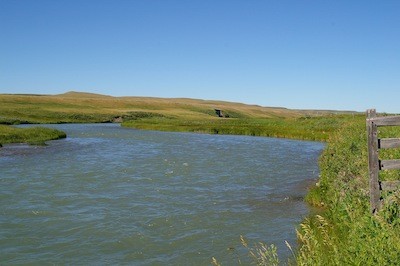 The Importance of Watershed Protection

Protecting the Eastern Slopes of the Rocky Mountains is crucial for preserving water quality and quantity. Alberta’s Rocky Mountains form the uppermost reaches of large catchment basins, gathering the water that supplies much of Canada with fresh water. For example, 90 percent of the water in the South Saskatchewan River Basin comes from the foothills watersheds, which make up only 12 percent of the area of the river basin.
Four of Canada’s great rivers originate in the Eastern Slopes. The Peace and Athabasca rivers run east and then north, joining in Wood Buffalo National Park to form the mighty Mackenzie River, which empties into the Arctic Ocean. The North and South Saskatchewan rivers join in Saskatchewan and flow east and north through Manitoba, emptying into the Hudson’s Bay.

The Eastern Slopes have been recognized as key watersheds since the early 1900s. In 1948, the federal and provincial governments established the Eastern Rockies Forest Conservation Board, which provided a framework for the Rocky Mountain Forest Reserve until 1973. The Reserve was formally established by the Forest Reserves Act in 1964 for the maintenance of water supply and the conservation of forest and other vegetation.
In 1977, the Eastern Slopes Policy was developed after substantial public consultation, including extensive participation by AWA. The Policy’s highest priority was “watershed management to ensure a reliable supply of clean water for aquatic habitat and downstream users.” 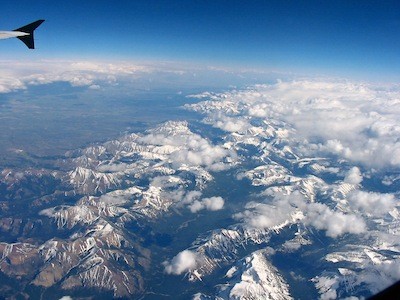 Mountains and high lands intercept clouds, causing rain and snow to fall. The Rockies stall water-laden clouds blown west from the Pacific Ocean and the water accumulates in glaciers, snowfields, soils, and forests. From these, water is released slowly through the seasons into lower parts of the watershed.

The forested slopes of the Rockies and the foothills play a very important role in storing, cleansing, and slowly releasing water in upper watersheds. Forest soils with their deep layers of mosses, lichens, and organic matter are natural sponges that absorb and hold water. Trees themselves act like water towers, holding large amounts of water as it slowly passes from the ground, gathered by the roots, into the air via the leaves. Trees and all forms of vegetation purify water as it passes through their systems.

The American Water Works Association has found that every 10 percent increase in forest cover in a watershed – up to 60 percent forest cover – results in a 20 percent decrease in water treatment costs. Forests also contribute to flood prevention by holding water in place. When we destroy our forests, we are destroying one of the key features that helps the landscape retain and slowly release the water it receives.

As surface water plummets downhill in fast-moving streams, over rocks and waterfalls, it is being oxygenated to support aquatic life and cleansed. The action of water being thrown into the air adds air and puts it in contact with ozone and ultra violet light that kills parasites and bacteria. Fast moving headwaters streams perform this role well.

Water quality is enhanced as it passes through healthy natural ecosystems. These systems also act to control flooding by holding water in place and releasing it slowly. Maintaining watersheds in their natural form is increasingly being seen as important for maintaining wildlife and for reducing the costs associated with providing clean, safe drinking water and flood control.

As communities everywhere become more aware of the vital role healthy watersheds play in cleaning and filtering water, more is being done to protect them. Many cities in North America, including New York and Vancouver, are spending millions of dollars in securing their watersheds through purchasing or leasing land, or buying forestry rights.

In the United States, the Environmental Protection Agency (EPA) has become a key player in promoting watershed protection. With regard to drinking water, EPA has developed programs, tools and resources to build capabilities for source water protection.  This approach was instrumental in helping New York City secure its watershed in a landmark agreement in December 1996.

The process involved residents and stakeholders coming together to find ways to minimize pollution in the watershed. Most of the pollution was due to runoff from urban and agricultural areas, including dairy farms and wastewater discharges from treatment plants. To resolve these, the parties involved agreed on land-use regulations that preserve the integrity of the watershed. Landowners are able to develop their property within the regulations, or they can choose to sell it to the City. The City also acquired land that is vital to the protection of key reservoirs and water.

Without these changes to protect the watershed, and thereby achieve high water quality, federal law would have required New York City to build a water filtration system at a cost in excess of 8.5 billion dollars. According to Carol Browner of the U.S. Environmental Protection Agency, “By putting in place the mechanisms for protecting New York City’s drinking water at the source, by keeping contamination out of the water supply in the first place, we offer the promise of protecting public health while saving billions of dollars for rate payers.”

The City of Vancouver has also successfully protected the three watersheds that supply its water. After determining that logging in the watershed was ruining the water supply, the provincial government established the Greater Vancouver Water District in 1926 with a mandate to “end all logging and to purchase all the private lands to prevent further logging.” By 1927, the Water District had negotiated a 999-year lease with the provincial government giving it complete control over the watershed lands for the rental fee of one dollar per year, per watershed.

In 1967, despite its clear mandate to protect the watersheds, the Greater Vancouver Water District negotiated a logging licence agreement with the provincial government. Road building and clearcutting began again. In 1988, the Western Canada Wilderness Committee launched a public campaign to bring attention to the logging issue in the Greater Vancouver watersheds. Other public advocacy groups joined in opposing the logging, and by 1995 logging activity had been successfully halted.

The City of Calgary has also become more active in trying to protect the Bow and Elbow River watersheds that supply its water. The City now recognizes that it is a major watershed stakeholder and has raised concerns about land use in the watersheds, including logging practices, site rehabilitation, and water body buffers.

AWA’s representative on the Bow River Basin Council has pushed hard for a focus on the protection of the Bow’s headwater. Only recently has the Council stated this as a priority, and we hope to see recommendations to the government that will support our concerns for these southern Eastern Slopes watersheds. 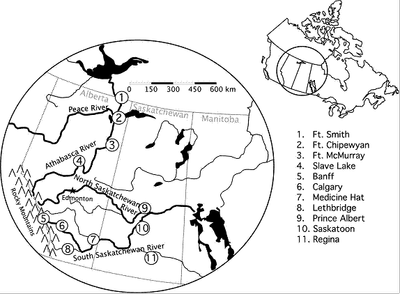 The Eastern Slopes of the Rockies contain the headwaters of rivers that supply water to the prairie provinces and Northwest Territories.
(From “An Impending Water Crisis in Canada’s Western Prairie Provinces,” David Schindler and Bill Donahue, 2006)

Reducing Access is the Answer: Now What was the Question?

The Forests of Alberta’s Southern Eastern Slopes: Forest or Forestry?

A peer-reviewed scientific paper by Richardson et al. that reviews whether riparian zones qualify as…

Progress report on an Ecosystem-based Conservation Plan for the Ghost River Watershed, prepared by Silva…

Despite good progress by a multi-stakeholder group in understanding issues around Athabasca River water withdrawals,…