Wildlands Advocate Article, October 2012, by Robert W. Sandford. Concern over the Mackenzie River system led the Rosenburg Forum on Water Policy, and its panel of experts, to inform the current negotiations of agreements between British Columbia, Alberta, Saskatchewan, and Northwest Territories.

“What is at stake is the ultimate state of one of the world’s most important northern rivers, a river system scientifically described as a lynch-pin of water-ice-climate interactions that create relative climatic stability not just in southern Canada but throughout the world.” 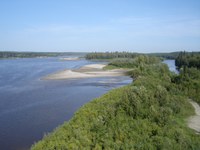