Alberta is criss-crossed by more than 400,000 kilometres of pipeline, of which 85% are oil and gas pipelines.

Pipeline systems play a vital role in delivering the energy demanded by North Americans—due to their sheer number and distance covered as well as the considerable environmental and human health risks, pipelines must be better planned, managed and regulated.

A pipeline corridor (or right-of-way) is the area cleared to accommodate pipe diameter, and construction, maintenance and regulation activities. These corridors generate a significant developmental footprint upon the landscape. Typical corridors are between 15 and 18 metres in width, while larger pipelines may require corridors up to 45 metres wide. 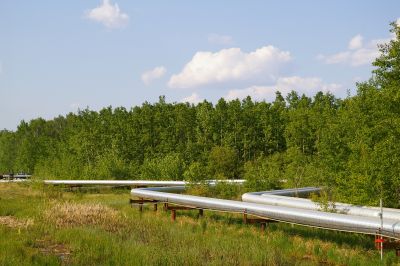 Alberta Wilderness Association (AWA) believes pipelines pose significant risks to human and environmental health.  Pipelines must be built to the highest possible standards of safety.  Pipelines must be routed to avoid impacts to environmentally significant areas including regionally designated areas, protected areas, critical wildlife habitat, intact fragments of grasslands and parklands natural landscapes, and AWA areas of concern, as depicted on our Wild Alberta map. The use of best management practices to minimize disturbance is essential and corridor access must be monitored and controlled through locked gates.  Effective monitoring and harsh penalties for noncompliance or environmental damage is imperative.

AWA believes the public needs more evidence that Alberta’s older pipelines are safe, that important ecosystems are preserved through appropriate route planning and best management practices (BMPs) and that approvals are being given with public and ecological health and best interests in mind.

AWA is concerned with the further destruction of dwindling native grasslands. The lengthy list of sensitive species that rely upon intact grassland habitat that will be impacted by the Keystone XL project has not been adequately considered in the approval process for this pipeline.

TransCanada’s Keystone XL pipeline is a 2,673 kilometre crude oil pipeline, which would begin in Hardisty, Alberta, pass southeast through Saskatchewan, and into the United States, eventually connecting the Alberta oilsands to refineries located on the U.S. Gulf Coast.

Though the 1,172 kilometres of pipeline manage to avoid AWA’s Areas of Concern (as depicted in the Wild Alberta map), it will nonetheless fragment vast areas of habitat and wilderness across Alberta and northern British Columbia.

The Northern Gateway project will cross a half dozen mountain ranges, hundreds of streams and a number of major rivers, including the headwaters of the Fraser River and the Skeena River.

ENGO news release. The Suffield Coalition is disappointed to have learned last week that the…

Pipeline Development in Rumsey Natural Area Another Betrayal of Trust

Gleniffer Oil Spill could be Bigger than Estimated