In what has become a sad annual tradition, Alberta’s ministry of Environment and Sustainable Resource Development has released their count of the number of grizzly bears known to have met their end in 2014. All of this year’s 19 deaths were caused by humans, underscoring the grave need for habitat protection for this threatened species.

That number also includes eight bears that died due to accidental causes, such as on roads and railroads. The access (including roads and trails) density in most grizzly habitat is well above maximums recommended in the provincial government’s Grizzly Bear Recovery Plan 2008-2013, written when a population count estimated that fewer than 700 grizzlies were left in the province.

“We need to say that enough is enough, and get serious about managing our public lands and how much access we build into them,” reacts Sean Nichols, Conservation Specialist with Alberta Wilderness Association. “Alberta has an image around the world of being a playground for wildlife, but the reality, at least for grizzlies, is that we are a graveyard.”

Another 31 grizzlies also died in 2013, the highest number since the hunt was stopped in 2006. While last year’s total of 19 was lower than that, it was still the highest number in the last several years. Altogether, 168 total grizzlies have died since 2006, 150 of them from human causes. The biggest causes of death in that time were illegal kills (i.e.: poaching) with 40, and accidental (e.g.: road-related) deaths, with 36.

The province is currently working on a long-delayed update to the 2008-2013 recovery plan, with a draft expected later this year. It is anticipated that the recommended access thresholds will be updated into hard limits with regulatory teeth and enforcement provisions, integrated with an access management plan developed for the South Saskatchewan Regional Plan (SSRP).

“The proliferation of roads, trails, pipelines and other forms of access into our backcountry is one of the greatest threats to grizzlies and other threatened species,” concludes Nichols, referring to research showing that most grizzly deaths occur in proximity to roads. “Seeing this glut of human footprint being addressed would go a long way toward making up for the failure of the SSRP to include fully-protected status for the Castle and other vital wilderness habitat.” 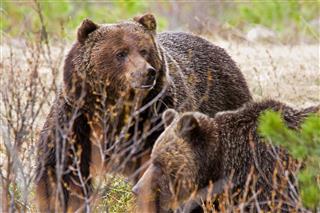