In September 2013, we wrote informing you of that sensitive rough fescue and mixed grasslands on the Milk River Ridge are being opened up to exploration activity in the Alberta Bakken oil play. At that time, efforts to secure legal designation for these lands were being delayed until the Government of Alberta released its South Saskatchewan Region Plan (SSRP).

Your letters on this matter and about your ideas for the SSRP helped let our government know the level of importance the public places on sensitive grasslands. The message – Albertans want grasslands protected was heard. Your efforts helped secure a line on a map in the SSRP as a future conservation area. Regrettably, at the same time, the plan allows business to continue as usual until such lands are legally designated.

We hope you will take a moment to consider the dilemma of a plan and process that waits to designate conservation lands while allowing new developments in those areas that need protection most. We understand DeeThree Exploration who holds the exploration leases for this sensitive area plans to gain entry to these lands by summer 2015.

AWA has been working behind the scenes to secure protection. The time seems right to reinforce that work with your help. Letters and emails to the Premier asking that the proposed addition to the Twin River Heritage Rangeland in the South Saskatchewan Regional Plan be put out of bounds to new oil and gas development immediately will help (see the map at the bottom of this newsletter). You helped put this line on a map—now it’s time to make that line meaningful with full legislated protection.

The letter AWA has written to the Premier and the Ministers is posted here.

Send your letter/email to Premier@gov.ab.ca and your MLA.

Alberta’s protected area targets have not been met in the Grasslands. Less than 1% of the Foothills Fescue and Mixedgrass Natural Subregions have any legal protective designation.

Even rarer are grasslands where Grizzly Bears spend time out on the Plains and ranchers like Audrey Taylor and her family who hold grazing leases in this area and want to see these magnificent creatures and grassland jewels legally protected—Audrey and her family have been working hard to see that it happens here.

Your help will make a difference. Protecting these sensitive grasslands will help Alberta achieve its protection goals, meet the requirements of the South Saskatchewan Regional Plan and promote closer ties between the ranching and conservation communities. 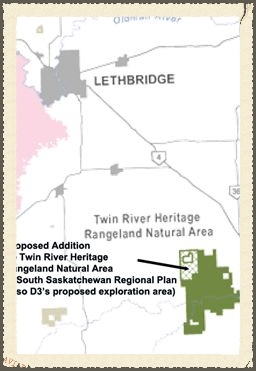 Please send a copy of your letter to colson@abwild.ca as we will file your letter in the library at AWA.