New logging cutblocks are imminent in a particularly inappropriate corner of West Fraser Hinton’s forestry tenure area in west central Alberta. Logging operations in fifty-four cutblocks, slated to start next month, will remove mature forests that are critical habitat for the threatened A La Peche southern mountain caribou population. This will eliminate the forests sheltering both sides of a key endangered Athabasca Rainbow trout stream, forests that stretch from Highway 40 right to the edge of the iconic Willmore Wilderness Area. The logging will undermine important caribou and native trout recovery options and will prolong Alberta’s current reliance on controversial annual wolf culls. All of the logging is scheduled to start just ahead of a crucial caribou sub-regional planning process for this area. 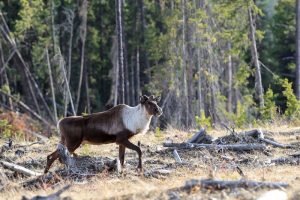 Alberta Wilderness Association (AWA) and Canadian Parks and Wilderness Society (CPAWS) learned of these plans from concerned trappers. The trappers have only seen logging plans for two forestry ‘compartments’ overlapping their Fur Management Area. The cutblocks will remove almost all the remaining mature forest in the Moon Creek area (Map 1). The imminent cutblocks appear to cover a greater portion of the Moon Creek area compared to what Alberta approved for that area for the entire decade of 2016-2026, as per the publicly available approved spatial harvest sequence in West Fraser Hinton’s approved 2017 forest management plan.

Only six percent of West Fraser Hinton’s total tenure area overlaps with ranges of A La Peche and adjacent Little Smoky caribou populations (Map 2). AWA and CPAWS request the Government of Alberta defer new cutblocks in the six percent of West Fraser Hinton’s tenure that overlaps caribou range. This will protect caribou survival options while Alberta continues to develop its promised upcoming caribou habitat plan for this area that complies with the federal Species at Risk Act.

“You’d be hard pressed to think of a worse place to clearcut in Alberta right now,” says Carolyn Campbell, AWA conservation director. “If Alberta can’t pause logging in the six percent of West Fraser Hinton’s tenure area that overlaps with caribou range until its promised sub-regional plan is finished, there is something deeply and drastically wrong with forestry management here.”

“Wolf culls are not an excuse to continue destroying caribou habitat—they are an emergency measure meant to stymie caribou declines while habitat is conserved and restored,” says Gillian Chow-Fraser with CPAWS Northern Alberta, referencing the predator management in A La Peche range ongoing since 2005. “With sub-regional planning just starting now, everything depends on having intact habitat left to manage.”

“The millions of dollars Alberta spent to reclaim the seismic lines, the millions spent to aerial gun the wolves and set poison bait sites…. then to have 54 cutblocks in the same caribou zone? It really seems to fly in the face of any logic…” says trapper Darcy Handy. “Is the government really concerned about saving the caribou?”

The upcoming logging overlaps with the winter range of A La Peche caribou, a range already heavily disturbed and fragmented from forestry and energy activities. By 2017, only 12% of the A La Peche winter range was undisturbed, far below the minimum 65% undisturbed threshold that is required for self-sustaining caribou. As well, Alberta is obliged to maintain enough biophysical habitat (habitat in current good condition) for the near-term survival of the caribou. The dire measure of wolf culls can only be justified as a temporary, last resort measure if it is combined with strong habitat protection and restoration.

Alberta committed in its October 2020 agreement with the federal government to start a planning task force for A La Peche and adjacent Little Smoky caribou in 2021 and to finish a plan that complies with caribou habitat requirements by 2023. These imminent clearcuts will further reduce available older forest critical habitat these caribou need to survive the next few decades. They also further reduce the available options for the upcoming range plans to achieve habitat for self-sustaining caribou. 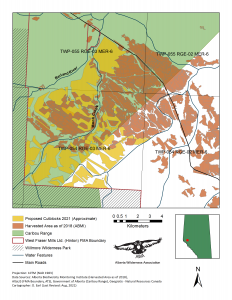 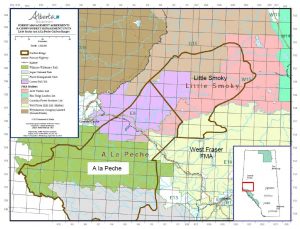