Alberta’s first caribou range plan has been released, and public comments are needed by August 5th. Please take a minute to send your e-mail to the Alberta government with a few crucial points for how to strengthen these precedent-setting plans that have the potential to recover our beautiful and important woodland caribou populations.

Although the draft Little Smoky and A La Peche (LS-ALP) range plan is better than what the previous government was considering, it still enables further critical habitat destruction, which is unacceptable. The draft plan allows even more forest to be removed and fragmented in the next 5 years because it allows some logging and unspecified new energy disturbance to continue in the ranges. This will likely extend the dependence on the massive existing annual wolf kill. The plan also resorts to constructing a 100 square kilometer fenced zoo for wild caribou, which is a backwards step for wildlife and wilderness conservation.

The Alberta government does deserve praise for other caribou decisions, so adding your thanks on these points would be helpful:

Alberta’s woodland caribou rely on intact forests and wetlands to minimize overlap with predators. Although the west central foothills where Little Smoky-A La Peche caribou live have high industry disturbance levels now, these forests can recover to be important ‘climate change’ refuges supporting self-sustaining caribou and other wildlife. This draft LS-ALP range plan is Alberta’s first under the federal Species at Risk Act (SARA). Alberta’s other caribou plans are due by October 2017, so it’s really important that this first plan is effective.

The draft plan allows harmful in-range logging to resume even before the final range plan is approved by Cabinet. New logging creates habitat favoring deer, moose and wolves. The draft plan ducks a long-overdue and urgent action to end logging within these ranges while caribou still survive. Government leadership is needed so forestry companies share their wood allocations outside endangered caribou ranges.

For the energy industry, specific total disturbance limits are needed so operators extract resources without destroying habitat. The proposed seismic line restoration program is positive and necessary, but it needs clear caribou habitat targets and audits by the government. As well, placing habitat ‘on a trajectory to recovery’ must not justify new disturbance and increase risk to caribou until self-sustaining population conditions are achieved.

By allowing habitat disturbance to worsen in the next five years, the draft plan likely prolongs Alberta’s unethical reliance on the ongoing massive wolf cull in this region.  Building a fenced caribou zoo is a backwards step to domesticate an endangered species instead of recovering it in its habitat, which is the intent of the federal caribou recovery strategy and SARA.

Please write to Hon. Shannon Phillips, Minister of Alberta Environment and Parks, AEP.Minister@gov.ab.ca,  and to esrd.planning@gov.ab.ca with your comments by August 5th.  And please copy Carolyn Campbell at ccampbell@abwild.ca.

– the seismic restoration program to include specific government-set habitat targets and audits, and recognize that placing habitat ‘on a trajectory to recovery’ must not justify new disturbance

– the caribou zoo proposal to be replaced by these strong habitat steps, so caribou can be self-sustaining and predator control can end as soon as possible

Thanks for helping Alberta’s caribou! 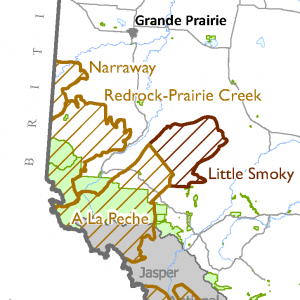