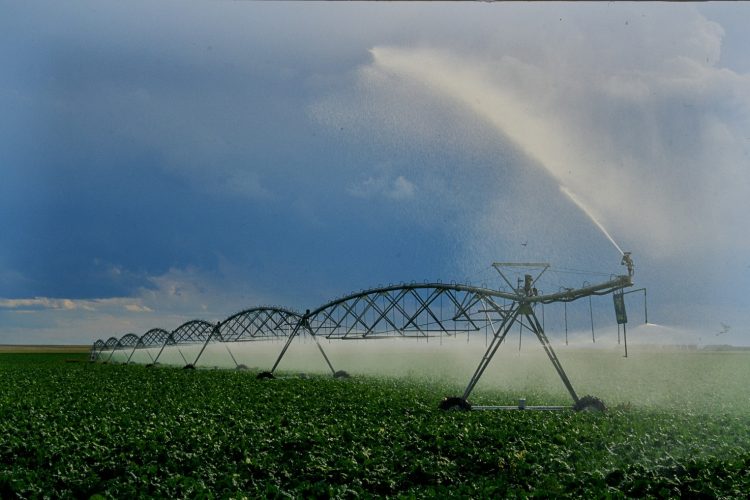 In April 2021, the Municipal District of Acadia No. 34 (MD Acadia) and the Special Areas Board (SAB) in partnership with the Canada Infrastructure Bank (CIB), and Alberta Agriculture, Forestry and Rural Economic Development (AAFRED) commenced a joint study to assess the technical and financial feasibility of creating an irrigation system for agriculture across the MD of Acadia and the Special Areas region of Alberta using water from the Red Deer River.

This news came as a surprise to Alberta Wilderness Association (AWA), as Alberta Transportation had already commissioned an in-depth study of potential irrigation in the Special Areas region back in 2018/19. This previous study included both an environmental impact assessment as well as a socio-economic review for what was then known as the “Special Areas Water Supply Project” (or SAWSP). The 2018/19 study was conducted by Klohn Crippen Berger (KCB), and it focused solely on the Special Areas, excluding MD Acadia at that time.

The previous reports noted that the proposed irrigation project would have considerable environmental impacts and described the project as a poor financial investment. At the time, AWA expressed our opposition to the proposed project, stating that it was not a financially or environmentally responsible investment of public funds by the provincial government, especially as it only benefits such a small number of people in a relatively unpopulated portion of Alberta. This is the reason why we were so concerned when we learned that a new study was underway.

The most recent study was conducted and prepared by WaterSMART Solutions Ltd., and the results were published in a report made available through the SAB website back in August 2022. AWA has obtained a copy of this report and we have reviewed the document to better understand what considerations have been taken to avoid, minimize, or mitigate any potential negative impacts of this proposed project to biodiversity and wilderness ecosystems within the project area.

The Special Areas and MD Acadia encompass four rural municipalities across more than 2.1 million hectares in southeastern Alberta. The project area lies east of Calgary along Alberta’s border with Saskatchewan, primarily within MD Acadia proper and Special Areas No. 2 just to the south, straddling either side of the Red Deer River. This proposal is for a different water pipeline route, to irrigate different lands than the 2018/19 proposal. The project is intended to transform the existing dryland agricultural industry in the region for the sake of increased crop production and introducing higher-value crops. The project partners hope to accomplish this through the creation of new irrigation infrastructure which they hope will provide a more reliable source of water. 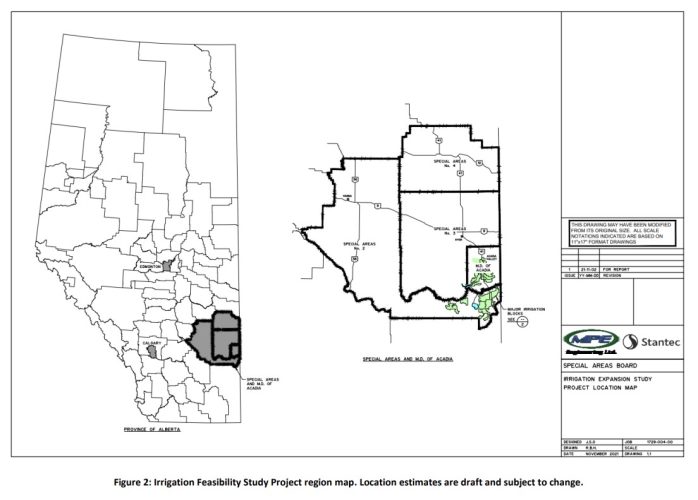 The report finds that it is both technically and financially feasible to develop up to 108,000 acres of irrigated land in the project area across previously cultivated farmland – meaning that no native grasslands would be converted into irrigation acres as part of this project. However, the report also indicates that certain lands outside of the irrigated area will be needed to support the necessary infrastructure (i.e., canals, pipelines, pump stations, reservoirs etc.) which could have an impact on nearby native grasslands. The proponents state that this impact likely represents less than 10% of the total project footprint; but given the perilous state of Alberta’s remaining native prairies, AWA believes that any loss or deterioration of grassland is significant. We are also concerned that this proposal may only be the first, comparatively benign reach of a Special Areas water pipeline, with much larger areas of native grasslands eventually compromised by irrigation.  The 2018/19 Environmental Impact Assessment included the loss of a native grasslands as a potential effect of the project, stating that: “The SAWSP would lead to permanent changes in plant communities across the footprint of the SAWSP”, and that “the displacement of native prairie due to inundation is expected at most components.”

Looking more closely at the section on environmental impacts, the report acknowledges that affected stakeholders include both residents in the project area as well as the rest of Canada – which seems to recognize the important role that Alberta plays in supplying water to downstream provinces and territories. The report states that there are six categories of environmental impacts from this project including air quality, water quality, water security, ecological systems, GHG emissions, and impacts on communities. However, the 2018/19 EIA report looked at 11 different categories of potential impact including air quality and noise, surface water quality, surface water quantity, groundwater quality and quantity, fish and aquatic habitat, soils and terrain, vegetation and wetlands, wildlife and wildlife habitat, land use and management, infrastructure, and historical resources. The previous report provides a more extensive assessment than the 2022 report published by WaterSMART.

In-stream (or environmental) flows are required to support and maintain the health of aquatic and riparian ecosystems, and despite this project intending to redirect water from the Red Deer River, the report states that the project would not substantially alter stream flow. Despite this statement, the report goes on to say that further analysis is needed to determine the significance of these changes and their implications for aquatic ecosystems, which seems to contradict their previous claim that stream flows would be unaltered. This claim leaves us uncertain as to whether the impact on aquatic ecosystems has been considered at this stage or not. Looking back at the 2018/19 EIA yet again, the previous document explicitly states that “significant changes to regional water quality and water quantity are expected” as a result of this irrigation project, and that “the SAWSP is predicted to have an adverse residual effect on the downstream aquatic environment”, yet the newer study does not seem to have incorporated this risk into their assessment.

This section explicitly acknowledges that the project is expected to negatively impact the environment through increased air pollutants, greenhouse gas (GHG) emissions and risks to water quality, while glossing over any potential impacts of aquatic and/or riparian ecosystems, native grasslands, or species at risk which may reside in these areas. Again, environmental flows are mentioned elsewhere in the report, but not under the section that outlines environmental impacts. The justification for the feasibility of this project seems to rest on the assumption that the project will recover and/or create new wetlands which will have a net benefit on ecological systems. This cumulative environmental benefit driven by wetland creation is estimated at $589 million in 2020 dollars, but no math was included to demonstrate or justify how this number was arrived at. Other notable absences from the environmental impacts summarized in this report (beyond those we have outlined already) include consideration for altered flows and quality of groundwater, increased soil erosion from the growth of typical irrigated crops (e.g., potatoes, sugar beets, soybeans etc.) which are harvested too late to establish a cover crop for overwintering.

The capital costs required for the implementation and construction of the irrigation infrastructure were estimated at $1.3 billion for the most likely scenario, but with costs ranging anywhere from $348 million to $1.7 billion depending on the number of irrigated acres. That’s excluding any ongoing costs required for energy or operations. The report mentions that large financial contributions will be required if this project is to proceed – likely coming from the Government of Alberta, with financing from the CIB as well as money from private investors. This means that the project is only likely to go ahead with a significant contribution of public funds.

Given the seeming lack of a robust, detailed consideration for the environmental impacts of this project and how they will be mitigated, AWA does not support the implementation of this irrigation project for southeast Alberta. This project will require the acquisition of new water licenses for the diversion of water from the Red Deer River, while 68% of Alberta’s existing water licenses are already allocated for irrigation purposes. Although this project draws water from a different watershed, it needs to be considered in light of the irrigation expansion project already underway in the nearby Bow River and Oldman River Basins. Both projects have implications to the water quantity and quality that gets passed on to Saskatchewan and other downstream provinces.

It is also noteworthy that the 2022 report mentions that the push for this project is to grow higher-value crops, and to generate economic growth in the hopes that this will bring back jobs to the area, without any mention of the need or desire to feed Albertans with the crops chosen for production. The report includes multiple references to concerns about water scarcity and the future impacts of climate change on agriculture in the region – which are valid – but if that is the primary concern, then we feel that the project proponents should seek to further investigate the ideal crops to be grown for meeting regional needs for sustenance, or crops that are likely to succeed in drier conditions (as a result of climate change), rather than the most profitable crops for economic growth. The previous report found that even under the most optimistic scenario, only 12.8 cents would be gained for every dollar invested into an irrigation project in the Special Areas, with total costs expected to exceed regional benefits by $704 million. The socio-economic assessment also suggested that proposed irrigation project would not have a significant effect on changes to regional production and/or land values.

Given the lack of detailed information included in this 2022 WaterSMART feasibility study – especially in contrast to the detailed assessment conducted in 2018/19, we intend to learn more about the project’s scope and impacts. We recognize that the publication of this feasibility study does not guarantee that this project will proceed, but the study does recommend proceeding with the next phase of work such as the acquisition of a water license, as well as optimizing the project design to make the project more attractive to investment over the long term. We will keep AWA members informed as we receive future updates.

Please contact AWA Conservation Specialist Phillip Meintzer with any questions or concerns about this specific issue.