“The federal government needs to take immediate action to ensure these populations survive,” says Joanna Skrajny, AWA Conservation Specialist. “Each day that we delay taking action, we are potentially losing a significant piece of an irreplaceable species.”

Weather forecasts offer no relief; above average temperatures and below average precipitation is expected into September.

“Immediate action must include salvaging fish stranded in warm pools, releasing them into secure overwintering habitat – such as fishless mountain lakes – and retrieving them once habitat conditions in these streams are improved,” says Dave Mayhood, aquatic ecologist and Director of Timberwolf. “Without these actions, we’re facing the possibility that these populations will go extinct within the calendar year.”

AWA and Timberwolf found several instances of dire conditions in westslope cutthroat trout critical habitat. For example, Silvester Creek is currently nearing zero-flow conditions with no contingency in place to prevent the extinction of this population. 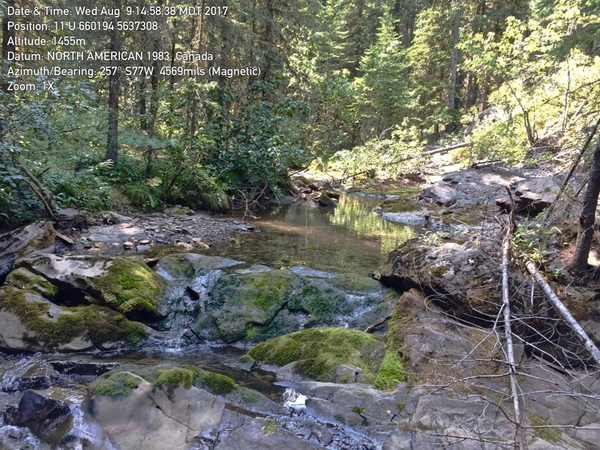 Silvester Creek, SARA-designated critical habitat for threatened Alberta native westslope cutthroat trout, came close to surface zero-flow conditions in early August, 2017. If this condition gets worse, trout may become trapped in waters that are too warm for them, or may be unable to seek suitable overwintering sites in late fall.

Adding to the crisis presented by the drought is the ongoing damage to westslope cutthroat trout habitat, including logging, OHV use, and construction work blocking up-and-downstream movements of fish. All potentially damaging activities in watersheds containing critical habitat must be stopped until these populations are secured and an Action Plan under the Species at Risk Act is completed.  The federal government is legally required to publish an action plan detailing how it intends to recover this species and the role of each remnant population in the recovery process.  Currently, this action plan is more than two years overdue.

In the long term, recovery of this species will require connecting small and isolated populations so they are more resilient to changes.

“In the absence of a legally required action plan, we are repeatedly observing trout and critical trout habitat being threatened in ways that could be mitigated with appropriate management,” adds Joanna Skrajny, “The unreasonable delay of the creation and implementation of an action plan is causing unnecessary harm to these populations.”