The Buzz About Native Bees 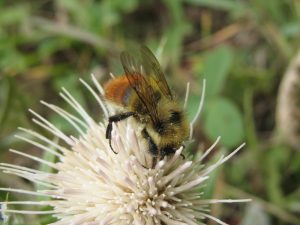 Bees – we literally can’t live without them. Approximately 45 percent of the world’s crop species used in agriculture depend on pollinators and the value of this ecological service is pegged in the tens of billions of dollars. After about half of the honeybee colonies in the U.S. were lost in the winter of 2006, the public grew increasingly aware and concerned that honeybee populations were declining.

However, the public is generally unaware that a collapse in honeybee colonies is not, in fact, a conservation problem.

Why? The honeybee (Apis mellifera) is not native to North America, and actually originated in Europe. In other words, honeybees are an invasive species! They were brought over and are still used to this day as livestock, shipped around to different farms and greenhouses in order to pollinate crops. As a result, the issues facing honeybees are similar to some of the problems generally facing industrial-scale agriculture.

A lack of species diversity, coupled with large populations held in close proximity to one another, has increased outbreaks of viruses, parasites, and pests afflicting honeybee hives. Shipping bees to multiple locations is highly stressful and likely contributes to their death. Finally, lack of food availability, poor nutrition, and changes in habitat due to monoculture crops and pesticides have poisoned and malnourished bee populations.

Megan points to the fact that Alberta doesn’t even have a complete inventory of the number of native bee species in Alberta. A couple of years ago, the Alberta Native Bee Council partnered with researchers at the University of Calgary and Alberta’s wildfire lookout towers. They set up bee traps in wildfire towers across the province as a first step towards compiling a province-wide inventory of Alberta’s bee species. While the data is still being processed, they’ve already discovered one new species, bringing the total number of known native bee species in Alberta to 322.  Megan estimates there might be another 30 to 50 species that we have yet to discover. Since the body shapes and colours of native bees vary widely, it may not be immediately obvious to many that the winged creature before us is a bee.

Let’s take a closer look at the charismatic uncle of the bee world, the bumble bee (Bombus spp.). Big, hairy, and personable, this species is a welcome, cheerful sight in any garden. Worldwide, there are about 250 known species of bumble bees; of those, 29 reside in Alberta. European countries have done a much better job of cataloguing their bee populations. There, many bumble bee species have declined steeply; several species have gone extinct.

In Canada, Sheila Colla and Laurence Packer studied bumble bees in Guelph in the mid-2000s. There, they re-sampled areas studied in the 1970s where 14 species of bumble bees were found. Thirty years later, they found that three species had vanished and the populations of four species had declined.

Currently, four bumble bee species in Alberta are listed under the Species at Risk Act: two of them are assessed as Threatened, one is listed as Endangered, and the fourth is listed as Special Concern. Once considered a very common bumble bee species in Alberta, the western bumble bee (Bombus occidentalis occidentalis) was designated as Threatened in 2014. After winter ends, the queen bee will emerge and look for a nest site; a perfect spot is an abandoned rodent nest either underground or within a piece of wood. Once they pick a suitable nest, they’ll forage for pollen and nectar and lay eggs in the nest in order to produce worker bees. The workers then take over the nest care and finding pollen duties. Late in the summer, the queen produces male bees and new queens which leave the nest to mate. Only the newly mated queen will survive until the next season. The rest of the bees, including the old queen, will die off come winter.

The decline of nesting bumble bee species has had cascading ecological impacts, including the decline of the gypsy cuckoo bee (Bombus bohemicus) which co-evolved as a nest parasite. A queen cuckoo bee takes over the nests of other bumble bee species in the spring by killing or injuring the host queen bee and tricking the male worker bees into taking care of her own eggs. The observed numbers of gypsy cuckoo bees in the wild are so small and sporadic that COSEWIC suggests the species may be extinct.

Since our bumble bees are loud, proud, and visible to the naked eye, the collapse of bumble bee populations has been fairly obvious. What’s less obvious is the current status of our remaining native bee populations, but it would not be unreasonable to assume that they have been facing similar declines.

Causes for the collapse of Alberta’s Native Bees

The introduction of neonicotinoids – a pesticide still commonly used – in the early 1990s likely triggered the initial collapse of bumble bee populations. Pathogens that developed in honeybee colonies and jumped over to native bee populations subsequently amplified the decline.

As for honeybees, habitat loss and a change to monoculture crops have affected native bees. However, since honeybees are generalist species, they can feed on a number of different plant species. In contrast, most native Alberta bees are highly specialized species; as specialists, they require specific habitats and pollinate specific plants. Due to this specialization, scientists often use specific characteristics such as tongue length and the flowers native bees feed on to identify species.

Evans suggests one rarely discussed phenomenon is having a significant impact on our native bees. Large honeybee colonies are effectively starving native bee populations by competing with them for pollen.

About 70 percent of North America’s native bee species are solitary and nest in bare ground. Bumble bee colonies are quite small, typically around 50 to 100 individuals but rarely exceeding 200.  Honeybee colonies are much larger – the Canadian Honey Council reports there may be more than 50,000 bees in a single colony. Naturally occurring pollen amounts may not be able to sustain such large honeybee populations. Some beekeepers therefore supplement honeybees with sugar syrups and other pollen substitutes to maintain large, otherwise unsustainable, honeybee populations on the landscape.

The sheer numbers of honeybees collectively depleting natural sources of pollen can devastate native bee populations. A single honeybee colony can eat food that otherwise would have sustained 100,000 native bees. This effect may be reflected in the fact that bumble bees located near honeybee hives gain less weight and have smaller queens. Unfortunately, Alberta has a love affair with the honeybee – over 40 percent of the country’s honeybees are in Alberta.

A decrease in native bees should be cause for public alarm. Their decline threatens crop pollination – one indispensable public benefit they provide. Other cascading impacts may include the loss of certain wildflower species since honeybees lack the specialization needed to pollinate them. Honeybees also may perpetuate the spread of invasive species by pollinating invasive plants.

Luckily, solutions are within reach. Despite widespread public outcry, the Canadian Government has refused to ban neonicotinoids; this simple change would provide a significant benefit to our native bees. In agricultural settings, it’s important to move away from monoculture crops and provide “bee refugia” – strips of native wildflowers and trees to provide nesting sites and a year-round diverse supply of food. In Europe, financial incentives offered to agricultural producers who restore grasslands and set aside areas of wildflowers have helped increase bumble bee species and numbers. In Alberta, healthy rangelands have greater numbers of bee species, suggesting that ranchers can play an important role in sustaining bee diversity.

Of course, wildlands are a vital source of diverse habitat and food  for specialist native bee species. However, researchers such as James Cane and Vincent Tepedino believe this refuge in the U.S. is increasingly imperiled as “managed honeybee hives may be placed after midsummer (e.g., Rocky Mountains, Sierra Nevada, and the Great Basin)” in wildland areas. This “supplemental” feeding of honeybees likely reduces the food supply of native bees and increases the risk of honeybees invading and/or spreading disease. Honeybees should not be brought into wild areas. Cane and Tepedino also recommend reducing the number of honeybee hives. Interestingly, despite the investment agricultural producers make in shipping around honeybees, native bees are actually more efficient in crop pollination and are able to do most of the pollinating legwork for 86 percent of crops.

There is also a lot that we can do as individuals to help protect and maintain native bees in our own backyard. You should try and do your part to provide good habitat for bees and other species. In general, being a lazy gardener is good for wildlife. Leave a few dandelions on your lawn in the spring, rake the leaves in the fall, and leave a few piles of branches and leaf litter. Also, don’t use insecticides.

One very rewarding way to help our native bees is to convert some of your lawn into flower gardens. Try to have plants flowering year-round; a particularly crucial time is the months of April and May, when the queen bee is eating food in order to begin reproducing. There are a number of native plants that are relatively easy to grow in the garden. In AWA’s own garden, we have early blue violets that bloom along our gravel paths in mid-May and are always smothered with bumble bees. Once established, columbines are low maintenance perennials that faithfully bloom every June. In late summer, meadow blazing stars produce tall spikes of bright pink flowers – these showy flowers are a bee and butterfly magnet! Finally, Saskatoons provide a double benefit – not only are they great for bees in the spring, they’ll provide you with delicious fruit as well.

It’s important to do some research before you go shopping for plants; greenhouses often continue to sell invasive species of plants or will spray their annuals with insecticide, which will end up doing more harm than good. If you are interested in planting native plants for native pollinators, some great resources to get you started include Wild About Flowers, ALCLA Native Plants and the Edmonton Native Plant Society. Alberta Invasive Species Council’s guide “Plant Me Instead” also offers alternatives to invasive flower species.

Cities have emerged as an excellent refuge for wild bees because of an abundance of habitat and food variety and a decrease in urban insecticide use. Unfortunately, that benefit is negated when honeybees in backyard hives compete with native species. It’s estimated that Calgary currently has 1,400 backyard hives there is no question that this negatively impacts our native bee populations.

In Alberta, the cities of Calgary, Airdrie, and Chestermere are all officially listed as bee cities, which means they are dedicated to establishing and maintaining bee food and habitat. If you live in a bee city, write to your elected city councillors and let them know you believe we should focus on supporting native bees, not honeybees, and that our parks and city landscapes should focus on planting native flowers.

In conclusion, I think that it’s time for us to reconsider our exclusive relationship with the honeybee and focus instead on increasing and encouraging our native bee populations. The outcome – a more diverse planet, full of beauty and flowers – would be a great ending to this tale.

Bee! I’m expecting you!
Was saying Yesterday
To Somebody you know
That you were due-

The Frogs got Home last Week –
Are settled, and at work –
Birds, mostly back –
The Clover warm and thick –

You’ll get my Letter by
The seventeeth; Reply
Or better, be with me –
Yours, Fly.