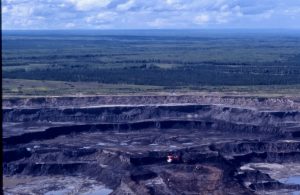 As the ‘end of February’ deadline approached for a federal decision, AWA urged the Canadian government to reject Teck Resources’ proposed ‘Frontier’ oilsands mine. On February 23, Teck announced it was withdrawing the Frontier proposal from the regulatory process. We thought it was important to publish our key wildlife concerns with this project ‘for the record.’

Teck’s Frontier mine would have had lasting harmful impacts to wildlife habitat. The large open pit bitumen mine would have caused further loss of northeast Alberta’s ‘biodiversity,’ the diverse wealth of native species and ecosystems that both Alberta and Canada have committed to maintain for future generations.

The federal-provincial regulatory panel that reviewed Teck Frontier concluded that the mine would have ‘significant adverse effects’ on biodiversity, locally and also regionally, considering the combined impacts of this mine and other industrial projects. The regulatory panel added “the proposed mitigation measures have not been proven to be effective or to fully mitigate project effects on the environment or on indigenous rights, use of lands and resources, and culture.”

What was at risk? For a start, a herd of wood bison called the Ronald Lake bison. They are special because they are free from the diseases of bovine tuberculosis and brucellosis that were introduced in the 20th century to the wood bison herds further north inside Wood Buffalo National Park. Local First Nations rely upon these disease-free bison for part of their food security. The mine would have destroyed or blocked the south part of the Ronald Lake bison range. They could have been pushed into poorer habitat and into contact with the diseased herds, which would jeopardize their health, numbers, and value to indigenous communities.

Teck Frontier’s lease sits beside the Athabasca River just south of the Peace-Athabasca Delta, along a major North American migratory flyway. The Delta is one of the world’s largest freshwater deltas and supports globally significant waterfowl populations. AWA was concerned that migratory birds, including endangered whooping cranes,would be harmed by the increased toxicity of industrial lands and waters on the nearby mine site.

Wetlands are a key part of Alberta boreal ecosystems, storing carbon and water, and providing valuable wildlife habitat. They make up just under half the landscape on the Teck Frontier site. Alberta has exempted oil sands industry applications, up to and including the Frontier mine, from the provincial wetland policy. The site’s peat wetlands, such as bogs and fens, would have been removed forever, as they cannot be reclaimed once they’re destroyed by a mine. Some swamps and marshes were planned to be re-built eventually, but at lower density than today. Re-creating water flows that support wetlands on mine sites is difficult. Furthermore, toxic soils from salts and hydrocarbons add to the risk that reclaimed wetlands in the mineable oilsands region will be significantly impaired. This is bad news, not just for sensitive wetland birds like the yellow rail and rusty blackbird, but for the whole regional ecosystem’s diversity and ability to retain water.

Forests are removed on oilsands mine sites for many decades. For the forest dwelling Canada lynx, industrial disturbance in the wider region is already having a significantly adverse impact on their habitat, and the Teck mine would have added to that. Old forests would be gone on-site for more than a century; whether they would have returned to their former diversity and complexity is uncertain. This is harmful to valued fur-bearers such as marten and fisher and to sensitive older forest bird specialists like the mighty northern goshawk or the beautiful Canada warbler.

With or without the Frontier mine, another serious problem for regional wildlife is the likelihood that oilsands mines will default on their reclamation obligations. Alberta’s regulations only require these mines to post a small financial security deposit now against their current reclamation obligations, and to ramp up payments 15 years before the end-of-mine life. The theory is, big companies with high assets now will pay up in future decades. But why would investors in this sunset industry pay billions to reclaim a site long after its main revenue-earning years are over?

The Teck Frontier mine proposal, nested within Alberta’s deficient regulatory system, fell far short of responsible resource development. As well as addressing their significant greenhouse gas emissions, the regional land and water impacts of oil sands development must be reduced to uphold Alberta’s and Canada’s international obligations to maintain and restore biodiversity.