Sunset on Little Fish Lake: Park one of many Shuttered by Alberta government 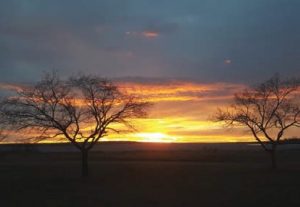 Little Fish Lake Provincial Park is small. The campground doesn’t have showers or flush toilets. There is no power at the camp sites, no shop to buy ice cream for the kids, no playground – just a couple of rusty swings. It doesn’t even have a picnic shelter anymore. Perhaps it blew down – I remember spending a miserable night huddled in there years ago, too afraid to set up our tent lest it get blown down by the gale-force winds. The bottom line is that Little Fish Lake has virtually no “amenities.”

But that’s the point. Because the amenities it does have include burbling meadowlarks and keening red-tailed hawks, coyote choruses under the clear, star-filled night sky and a waterfowl-studded expanse of water. And the sunsets. Those spectacular, fiery prairie sunsets still take my breath away.

Our family has spent a night or two at Little Fish Lake for the past two years and have made some special memories. Karina, our four year old daughter, saw her first porcupine there last year. As we were taking a walk down the quiet road it trundled out of the brush, letting us get a good look before settling down for dinner in the undergrowth. Later that evening, the three of us, bundled in our puffy coats, sat around a meal and enjoyed that golden hour of light, when edges soften and the prairie grasses seem to glow from within. Robins chirruped and gulls wheeled overhead as the clouds combusted into vibrant reds and oranges as the sun sank into the lake.

Later, snuggled into our sleeping bags Karina listened with us to the sounds of a prairie night. We strained our ears to hear the sound of far-off coyotes and then joined in with our own yips and howls. We have a book at home about a howling wolf pup but nothing beats actually experiencing these kinds of sounds and I am grateful we are able to share these moments with her. I hope they will stay with her for the rest of her life.

We planned to make a camping trip to Little Fish Lake a yearly adventure but, even before the COVID-19 crisis shut down all parks, the government chose to permanently close Little Fish Lake Provincial Park, along with 19 others that were “under-utilized.” The UCP government did this with zero public consultation. It is clear that this is a government that values the rights of industry and their corporate friends over conservation of natural ecosystems and the rights of everyday Albertans to respectfully enjoy our public lands.

Spending time in our wild backyard is the way we connect and unwind as a family. It also allows us the opportunity to share memorable experiences with our daughter and instill a love for wilderness in her. The experiences Alberta parks offer families like ours are far more valuable than the measly $5 million the government is claiming to save with this move. Alberta’s public lands are infinitely valuable, both for conservation and recreation. It took half a century of hard work by dedicated individuals to finally add the Castle to the province’s list of protected areas. Imagine how much effort it will require to bring back 20 protected areas that the government will permanently close, not to mention the 164 sites that are proposed for delisting.

Little Fish Lake Provincial Park in particular is special because it represents one of the few parks in the province which protects a natural prairie lake. The lake is important both for migrating and nesting birds, as well as deer, pronghorn, and other animals like our porcupine friend we met last year. There is something special about the prairies, and as the least protected ecosystem in the province (less than two per cent of Alberta’s grasslands are protected) the opportunities for everyday Albertans to enjoy them in their natural state are dwindling.

Thinking back over the past two years at our adventures as a family in Alberta’s parks, these closures would have made two other trips significantly more difficult or impossible. The first is our yearly prairie river trip with friends from Lethbridge. Last year it was on the Red Deer River and we began the week-long trip with a night at the Bleriot Ferry Provincial Recreation Area, a jewel-green stretch abutting the lazily flowing river, shaded by cottonwoods. It will be permanently shuttered by Premier Kenney’s United Conservative Party. As part of this trip we also spent time hiking in Dry Island Buffalo Jump Provincial Park, another park facing partial closure. The second is our yearly winter ski trip. This February we spent a night at the Elk Lakes cabin in B.C., accessed via the cross-country ski trails in Peter Lougheed Provincial Park, which will no longer receive maintenance.

I want my daughter to grow up with an understanding and love of the natural world around us. If we don’t fight for these areas to be protected they won’t exist for future generations to enjoy, either because they have been degraded by industrial and agricultural uses or because they have been sold out from under us, just as the UCP is currently doing with a parcel of Crown land near Taber. Public land belongs to all Albertans but if we don’t fight for it we may not have it for long.

Little Fish Lake Provincial Park’s demise has been delayed for one year. The government intended to open it on June 29 on a first-come, first-served basis.