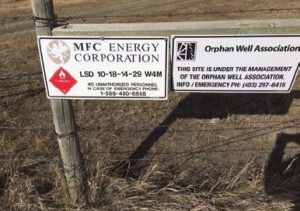 When I read the June, 2019 issue of the Wildlands Advocate, I was struck by the legion of AWA volunteers mentioned in the editorial. In the same issue, Dianne Pachal mentioned the benefits many volunteers provide to Parks Canada in Waterton Lakes National Park. This inspired me to volunteer to lead a field trip for AWA since I have always had a passion for the preservation of wild spaces.

Born in Holland, I grew up in Canada and have a B.Sc, in Geology from the University of Alberta and a B.A. in Economics from the University of Calgary. As a Registered Professional Geologist, I have worked in the oil industry for over 45 years. In addition to working in Canada, I have spent more than half of my career living and working overseas in Indonesia, Nigeria and Angola doing onshore and offshore exploration. I am familiar with the environmental issues associated with oil and gas exploration and production.

On two occasions before the trip, which was held on August 24, I scouted out an area south of Calgary that features interesting environmental and geological areas as well as areas impacted by oil industry activities.

The weather was splendid on the day of the field trip despite the touch of fall in the air. We had 23 attendees on the trip and Carolyn Campbell, Conservation Specialist, represented AWA on the trip. The first stop was Frank Lake, a restored wetland east of High River which is a Ducks Unlimited project. At the turn off into Frank Lake the birders on the trip were thrilled to see a golden eagle on a nearby telephone pole. We knew the trip was off to a good start!

Frank Lake is a shallow slough typical of the sloughs in the grasslands of southern Alberta. Hundreds of bird species have been identified there including ibis, herons, avocets, blackbirds, Canada geese, and cormorants. The water in Frank Lake comes from treated wastewater from the town of High River and from the Cargill Meat Packing Plant which processes approximately 4,000 head of cattle every day. Two small streams, Mazeppa and Blackie, also provide natural water into Frank Lake in the spring. Alberta Environment & Parks monitors the wastewater from High River and Cargill and regulates their allowable discharge into the lake.

Our second stop was a very brief tour of Nanton which was established in 1903. We drove through one of the historic neighborhoods which still has some century-old houses.

At Stavely we turned west onto Highway 527 to our third stop which was the Pine Coulee Reservoir. This reservoir stores water from Willow Creek for surrounding towns and provides pike, walleye, and rainbow trout for anglers.

We continued westwards to our fourth stop which was Willow Creek Municipal Park, a little known but beautiful 200-acre park which lies in a lush valley surrounded by grasslands above. A nearby, well-defined First Nations teepee ring was also visited.

From Highway 527 we continued westwards on the Flying E Road, a gravel road that climbs through magnificent rolling ranchland, past the historic Flying E Ranch bought in 1891 by George Lane, “Canada’s Cattle King.” He was one of the so-called Big Four who founded the Calgary Stampede.

Our fifth stop was where signs posted along the road stated “this site is under the management of the Orphan Well Association.” Accordingly, this area encompassed a gas field abandoned by an oil company. There we had a spirited discussion on the issue of orphan wells, abandoned oil gathering stations, and abandoned pipelines/well sites – all of which need environmental remediation. These signs represent the “tip of an iceberg,” a large and increasing problem for Alberta’s residents. As of November 1, 2019, the number of “orphan wells for abandonment” listed in the Orphan Well Association’s inventory was 3,406. The Association is financed primarily by the oil industry through levies charged by the Alberta government. Added to that total is another 6,593 orphan facilities, pipeline segments, and sites.

At the intersection with Highway 22, also known as the Cowboy Trail, we travelled northwards to the village of Longview which was our seventh and final stop. A very active program of about 30 oil wells have been drilled and oil production is being carried out along the southern, western and northern edges of Longview as well as in the center of the village. This is not a hydraulic fracturing, colloquially known as fracking, operation. Rather it is a conventional drilling operation with short distance horizontal wells drilled into the porous limestones of the Turner Valley formation. From an important environmental view point, the field trip attendees were reminded that, when this field is eventually depleted, the oil field’s operator will need to properly abandon the wells and environmentally remediate the well sites.

As my industry background and affiliation with AWA suggests, I believe the remediation of the oil industry’s activity must be a priority of industry and government. I hope that message was one the attendees took home with them after a splendid August outing.