The Alpine Club of Canada has voluntarily suspended bookings at its Tonquin backcountry Wates-Gibson hut for the entire winter. The groups are asking all backcountry winter recreationists to lead by example and to ask their peers to stay out of the Tonquin backcountry all snow season to support caribou survival.

Backcountry ski and snowmobile supply routes bring noise, packed trails and people into high quality caribou habitat (see map), which can harm caribou in three ways: stressing the caribou, displacing them from the best habitat, and making it easier for wolves to gain access and hunt them.

“It’s important for Parks Canada to set a good example to other jurisdictions by managing access in caribou ranges based on the best available evidence,” says Carolyn Campbell of Alberta Wilderness Association. “Jasper caribou are designated under the Species at Risk Act, yet they have been sliding towards extirpation before our very eyes.”

“There are so few caribou left in the herds in Jasper, that every single individual counts,” says Gillian Chow-Fraser of CPAWS Northern Alberta. 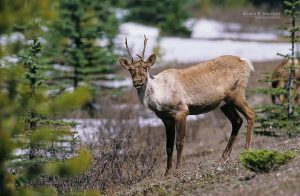 Parks Canada has improved wildlife management in Jasper National Park and has closed winter access into the Tonquin backcountry until February 16, but the Tonquin herd continues to decline.

Caribou can perceive touring skiers as increasing predation risk. This can cause caribou to be stressed in the presence of backcountry skiers, and to avoid good habitat areas where people have been.

During winter, the consequences of being displaced from good habitat are high, as caribou eat mostly low-protein lichens and cannot afford the energetic costs of moving to avoid humans. Caribou cows are pregnant in winter; they need to stay healthy so that they can give birth to strong calves in late May or June.

Wolves can quickly respond to packed trails created by backcountry users. In the winter of 2015, two people hiked on foot into an area closed for caribou in Jasper National Park; Parks staff reported that wolves used those tracks within two days after they were made. In the worst scenarios, wolf use of packed trails can lead to caribou kills.

In the 1960s, southern Jasper National Park had hundreds of caribou. Today there are fewer than 60 animals left. One herd is gone, two more are at such low numbers that they might not last much longer. The Tonquin herd is the largest herd left; it only has 45 caribou, including 10 or less breeding females. Evidence from Jasper’s recently-extirpated Maligne herd, as well as other available scientific research, indicates more should be done to limit Tonquin access. 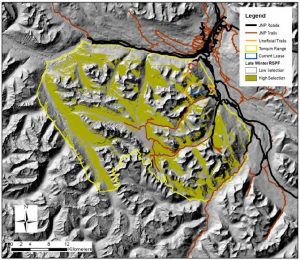