Norquay Gondola: A “No Go” for Banff 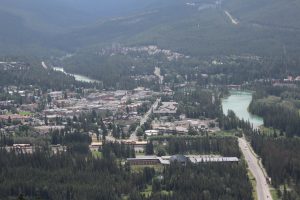 At the end of January, Parks Canada announced they would be rejecting Liricon Capital’s (aka Norquay Ski Resort) proposal to build a gondola from the town of Banff to the top of Mount Norquay. The gondola, as proposed by Liricon, was advertised as reducing traffic up the Norquay Access Road. It would have been paired with boardwalks and a new pavilion.

Parks Canada rejected the gondola proposal because it did not adhere to the site guidelines for development and growth. Those guidelines stipulate that, in order to approve a gondola, the project would need to deliver “substantial environmental gain.” This decision didn’t see sufficient merit in the feasibility study the Miistakis Institute produced for Liricon. Miistakis concluded there that closing the access road would deliver a potential environmental gain for grizzly bears and cougars, but ambiguous results for bighorn sheep.

A variety of potential issues were not addressed by the feasibility study. They included: the disturbance that expanded summer use at the resort would create for wildlife during their more active summer season, the impacts on other species and critical habitat within the area, and the fact that Liricon’s proposal called for development outside of their lease lands.

The gondola proposal is part of Liricon’s overarching vision to create an “Eco Transit Hub” based out of the Banff CP rail station, which they currently hold on a long-term lease. That larger vision imagines twinning the CP Rail line from Calgary to Banff for passenger service, building an intercept parking lot at the train station, and providing shuttles and walkable routes to various locations in the Banff townsite. Some have objected to the proposed transit hub as further commercializing the National Park. Liricon also envisions the development of “Banff’s Historic Rail Lands” into a tourism destination which would further increase the development footprint within the protected area.

AWA supports Parks Canada’s decision to reject this proposal. It recognizes the vital point that there must be limits to development and growth in the National Park. Statistics Canada’s 2016 census put the Town of Banff’s population at 7,851, less than 200 people short of the policy objective of keeping the town’s population below 8,000. Some feel very strongly that the town and the park more generally have reached, if not exceeded, their social carrying capacity. While the “Eco Transit Hub” is a separate proposal, AWA hopes Parks Canada will hold to their limits and prioritize the ecological integrity of Banff National Park.