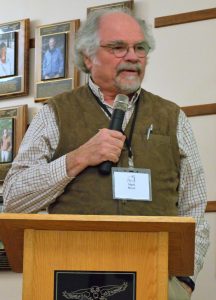 When I think of trade between Canada and the United States, commodities or goods and their import and export come first to mind. Oil, automobiles, cattle…those are the sorts of goods that come to mind first. Dr. Mark Boyce, 2019 AWA Wilderness Defender and the deliverer of the annual Martha Kostuch Annual Lecture, exemplifies the value Canadians receive through a different kind of import – intellectuals and their ideas. The University of Alberta recruited Mark from the University of Wisconsin system in 1999. Since then he has been a Professor of Ecology in the Department of Biological Sciences and he has built a reputation as a world-renowned population ecologist.

Mark grew up in Iowa, in the U.S. Midwest. The Hawkeye State’s landscape is dominated by rolling hills and, in modern times, cornfields. A self-described “farm boy,” Mark pitched a lot of manure, ploughed a lot of fields, and planted many bushels of corn growing up. When he wasn’t doing chores, he was hunting, fishing, and trapping and those were the activities that changed his life and led him to pursue a career in ecology.

Through his education, and reading therein works such as John McPhee’s Encounters with the Archdruid – a profile of David Brower, one of America’s leading 20th Century environmentalists, Mark developed a broader, more nuanced understanding of “wilderness.” Chasing waterfowl in the marshes of Iowa, Mark had never experienced what the U.S. Wilderness Act defined as wilderness. In part, that definition reads: “A wilderness, in contrast with those areas where man and his own works dominate the landscape, is hereby recognized as an area where the earth and its community of life are untrammeled by man, where man himself is a visitor who does not remain.” (I believe it’s incredible that The Wilderness Society’s Howard Zahniser was the primary author of this legislation. Conservationists writing conservation legislation…wouldn’t that be a change from what we’re used to?)

Mark came to see the existence of wilderness and healthy wildlife populations as a quality of life issue. That understanding, while motivating Mark in his early years of teaching, was the exception. In 1981 he taught one of the first conservation biology courses and realized that “usually the dollar rules and, if something is worth a lot economically, conservation takes second fiddle, wilderness loses ground.” Optimistically, Mark sees signs in the last few years that that imbalance is changing. Climate change’s global importance has elbowed its way into the public mindset and positively affected how the general public views wilderness.

After delivering a few barbs to what he called Alberta’s “petro-state” and government petroleum policy, Mark shifted to talk about his research. Much of his wildlife research in Alberta though is connected intimately to the activities of the oil and gas industry. Some of our audience may not have appreciated the important role that Mark and his research played in pushing the federal government to issue an emergency protection order for the greater sage-grouse. When the federal government prepared its first version of its recovery plan for greater sage-grouse it refused to identify critical habitat for sage-grouse. Ecojustice called Mark and asked if he would participate in the lawsuit that AWA and four other environmental groups had launched. The position Ecojustice argued was that the federal government, in refusing to identify critical habitat, was ignoring scientific information about the existence and location of that habitat. Sensitive to the possibility the University of Alberta might not like his participation in the lawsuit, he sought the counsel of his department chair. To her credit, his Chair told him that this type of work was an important reason they had brought him to Alberta. “Get after it” was her advice and he did. His research, as well as that of Jennifer Carpenter and Cameron Aldridge, made an important contribution to the Federal Court’s decision that the Environment Canada had broken the law; Ottawa had to identify critical habitat. The research subsequently helped push the federal government to issue an emergency protection order for greater sage-grouse under the Species at Risk Act.

While the emergency protection order has helped with respect to new oil and gas development, the future of sage-grouse remains extremely tenuous. It remains “probably the most endangered species of bird in Canada.” Given the statistical trend of the greater sage-grouse population, Mark wouldn’t be surprised if this iconic bird disappears from Alberta by as early as 2021… next year.

Mark told a more positive story based on the research he did with his doctoral student (now Dr.) Matthew Scrafford. Their subject was wolverines in northwestern Alberta. Mark, despite the awe he feels towards wolverines, initially wondered if they would capture enough of these forest ghosts to form solid conclusions about their population and behaviour. Whatever reluctance he had was laid to rest by the end of the first week when they had already captured and released three wolverines. Over four years, they put collars on 46 wolverines and logged over 50,000 relocations as their radio-collared subjects roamed through two general areas – Rainbow Lake and the Birch Mountains. The wolverine population in the Rainbow Lake area is at a high density due to the very healthy population of beavers in the region. There they discovered not only that beavers are one of the wolverine’s favourite prey species but also that wolverines would take up residence in beaver lodges. “On more than one occasion,” Matthew Scrafford wrote, “a wolverine was living in a beaver lodge after he killed the beavers and growled up at us from within the lodge.”

One especially rewarding part of the wolverine research was the interest the Dene Tha showed in the project. So enthusiastic were the Dene Tha that they offered a two-year stipend for a graduate student to engage in this research.

Towards the end of his remarks Mark took us back to an issue he mentioned at the outset: climate change. Everyone, Mark suggested, is talking about planting trees as a means to sequester carbon. Prime Minister Trudeau certainly talked about this approach during last fall’s federal election. Then he promised a Liberal government would plant two billion trees as part of the effort to transform Canada into a net-zero emissions country by 2050.

Due to the fire cycles in both the boreal and Rocky Mountain forests, the soil in our grasslands and parklands is likely a better candidate for an enduring carbon sink. That conclusion is suggested by the historic depth of the black soil horizon in grasslands and parklands alike. So carbon sequestration and conservation in the grasslands is one of the research themes Mark’s lab at the University of Alberta is currently working on. The goal of their work is ambitious and praiseworthy – to try to develop grazing practices that will be positive for grassland productivity, carbon storage, and cattle production.

Mark’s lecture underlined the very significant conservation challenges that we face today. But, it also emphasized the very promising research work that, if embraced by governments and powerful economic interests, will increase the probability of realizing a sustainable future.