West Fraser has confirmed in a letter to interested parties that:

“Thanks to concerned Albertans, the provincial government and West Fraser, we are able to give this caribou herd some hope,” says Gillian Chow-Fraser of the Canadian Parks and Wilderness Society, Northern Alberta. “There is so little intact habitat left in caribou ranges in Alberta, especially the À La Pêche winter range and Little Smoky range. This was an important move from the government and industry to respect caribou needs and meet Canada’s caribou recovery requirements.”

“Halting logging here in critical caribou habitat is absolutely the right decision to be making in the midst of a biodiversity crisis, with caribou in the thick of it,” says Charlotte Dawe, conservation and policy campaigner for the Wilderness Committee. “At 150 members this herd has a good shot at survival as long as future decisions weigh the needs of the caribou. The caribou need this habitat and it should be permanently protected.”

“Considering that Alberta government contractors have already begun the aerial gunning of wolves in caribou ranges throughout west central Alberta again this winter, it is imperative that the government also pulls all available mitigation levers for caribou recovery, especially when it comes to protecting core old-growth habitat,” says John E. Marriott of EXPOSED Wildlife Conservancy. “This is a great first step, setting aside these harvesting plans, but it means very little unless this area remains intact habitat for caribou.”

West Fraser initially proposed to start logging in 54 cutblocks in September 2021. Now postponed, this logging would have removed mature forest areas from Highway 40 right to the edge of the iconic Willmore Wilderness Park, along both sides of a key endangered Athabasca Rainbow Trout stream.

The winter range of À La Pêche caribou is already heavily disturbed and fragmented from forestry and energy activities. By 2017, only 12 percent of the À La Pêche winter range was undisturbed, far below the minimum 65 percent undisturbed threshold that gives caribou populations a fighting chance at becoming self-sustaining. Alberta is also obliged under its 2020 caribou agreement with the federal government to maintain enough ‘biophysical’ habitat (that is, forested areas at least 60 to 80 years old) to support the recovery of these caribou.

Other clearcut operations are still occurring inside caribou ranges. These operations continue to encourage the growth of more habitat for deer and moose, which in turn attracts wolves, creating unsustainable predation rates on caribou. The groups believe Alberta must:

AWA encourages all those who are concerned about the future of caribou to write Alberta Agriculture, Forestry and Rural Economic Development Minister Nate Horner (AFRED.minister@gov.ab.ca) and Alberta Environment and Parks Minister Jason Nixon (aep.minister@gov.ab.ca):

A big thank you to all our members and supporters who wrote letters of concern in the past months – you made a difference! 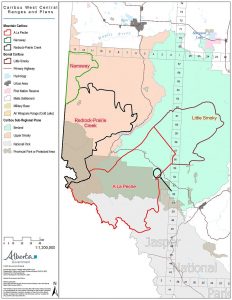 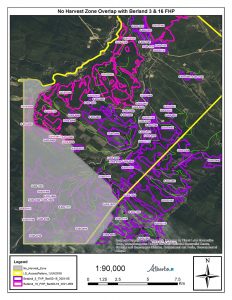