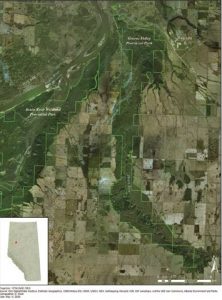 It’s a cold, crisp winter day and the sun is still throwing shadows across the deeply incised valley of the North Heart River. I’ve parked my vehicle in the parking lot just past the Heritage Towers Senior building and have crossed the metal suspension bridge to the town of Peace River’s Twelve Foot Davis Park. From here, I can enter the almost inaccessible Greene Valley Provincial Park. The provincial government intends to close this 3,131 hectare park, located adjacent to the town of Peace River.

The lower Heart River has been a special wildlife conservation area since 1939 when local dentist, physician, and pioneer aviator Dr. William Greene personally lobbied the Alberta government for its protection. Although it’s one of the oldest conservation areas in the province, it only became a provincial park in the year 2000. The park is very difficult to access. Numerous attempts to create hiking trails have been short lived. The frequent meandering river, steep cliffs, and the need to cross the river often are not conducive to trail development. In addition, the river is prone to severe spring floods; they have wreaked havoc on any attempts to build bridge crossings. A few hikers, willing to get wet feet crisscrossing the creek and to blaze their own trail do occasionally brave the valley in summer and a few school kids swim at one of the deeper river pools near Twelve Foot Davis Park. A few rarely used quad trails can be found in the upper portions of the park but the very steep valleys slopes are not user friendly. The main access to the park is near the mouth of the Heart River where it meets the mighty Peace River, in the town of Peace River, where I am now. The primary use of the park is in winter, when locals ski and snowshoe on the river ice. Winter access is growing in popularity.

The Twelve Foot Davis overlook and the Dr. Greene Cairn site, both incorporated when the sanctuary became a provincial park, offer a spectacular view of the Greene Valley Provincial Park; from there you look out over a boreal river valley of dry mixedwood distinguished by the Heart river, cliffs, barren native grassland hills and steep rolling hummocky valley slopes. There is no human disturbance footprint in the rugged terrain and the park is frequented by moose, elk, mule deer, lots of coyotes and the occasional wolf. It is something of a refuge for wildlife in an otherwise largely agricultural landscape.

As I cross the snow covered field of Twelve Foot Davis Park, I pause to gaze at the towering cliffs that form a natural amphitheatre around me. The town utilizes this exceptional site for occasional music festivals. At the edge of the field, I slip down the river bank slope to the snow covered ice surface and put on my cross country skis. Today I am fortunate; someone has gone before me and set a ski track. As I slide along the trail, I pass under a spectacular train trestle towering above my head. Ravens frequently congregate here in great numbers to roost and perform their aerial acrobatics. Rock cliffs form a long wall to my left all the way to the next bend in the river. The cliffs are cut by weather into ornate patterns. At one spot, an icicle over 20 feet long dangles down from a rock ledge. Soon the river starts its routine meanders. Fresh moose tracks cross my trail and the bench on my right is covered with old growth spruce. One giant tree, leans precariously over the river, desperately holding on to avoid its inevitable fate. The next bend opens to yellowish stone cliffs, covered with intriguing art works formed by wet mud dripping down the rock face. The mud hardens into endless complex patterns. I have many photographs of these beautiful patterns. Here and there, beautiful adobe nests of cliff swallows cling to the underside of rock ledges. How the birds make these architectural wonders is inspiring. An old wasp nest clings to another spot. Straight ahead is an open expanse of grassy hills crisscrossed by deer trails. The deer are attracted to these sunny slopes for over winter feeding when snows are deep elsewhere. On numerous occasions I have come across remnants of deer carcasses at the base of the cliffs. I have witnessed coyote groups herding deer on these slopes and am sure they use the “buffalo jump technique“ to push deer off the cliffs. Such stories in the snow beckon me to keep coming back.

I pause, taking in the quiet, the tranquility, and the feeling of remoteness (I’m only a half mile from town). A raven breaks the silence with a squawk as he glides effortlessly along the turbulent air currents, funneling along the cliff face. A second and a third join him; are they playing, I wonder? A coyote now follows the ski trail, taking advantage of the “easy” footing for a brief respite from the hardships of the endless hunt. I always ski close to the cliff faces as each one seems to display unique cliff features, each seeming to display a unique pattern of erosion, layering or colours. Many spots on the cliffs near the water’s edge offer curious irregular anomalies of rocks. I often stop to examine them… hoping that one is a dinosaur bone.
I leave the cliffs behind as I near the first tributary, and without the wall of rock, the valley formations attract my attention. Very unstable soils and slopes characterize many valleys in the Peace country. The hills and hummocks cut the landscape into mosaics of barren grassy hills and forest valleys and notches. New slumps have bared soil, broken and displaced trees, avalanched into a devastating scar on the landscape. But, this is the normal cycle in these deeply incised valleys. I always scan the barren grass hills and openings for critters. Everyone loves to see animals in the wild. It makes the trip. I see some wildlife every time; it’s a common reward in this pocket of sanctuary cut into the flat prairie farmland. The area I am entering now is frequented by elk and I often witness their calls, barking at my invasion to their privacy.

As I venture further along the ski track into the valley, I see the tell-tale evidence that my track-laying skier friend turned around here. I continue but am breaking my own trail now. Fortunately, the snow is not deep. I ski up beside an open patch of water, surrounded by ice. Rocks poke their heads upward, rippling the water. Giant ice crystals surround the hole, creating a magical entrance to another world below the ice. If you’re quiet, you can hear the water tumbling over the rocks under the ice. In the quiet I hear ancient voices whispering tales of old.

Skiing on the Heart River is quite unique because the river frequently floods on top of the ice as a result of spring water bleeding from the banks and under ice damming. Often sections of the river are flooded for a couple of days but freeze up quickly. It is not dangerous at all as the river is extremely shallow in winter. But, if you’re unlucky, you can run into slush and get wet feet or ski icing. Most times I can skirt the areas or ski through them if they are just slushy spots. As a result of this periodic flooding, you can get some very fast skiing coming back towards town, which is downhill from the river’s origins. The conditions are typically just a skim of snow over the ice. I even skate ski sometimes, gliding easily in long slow strides.
Typical of all trips, I seem to pay more attention going upstream then going downstream and as a result discover most of the exciting experiences going up. The trip back is a lot shorter and more of a work out. But I feel blessed to be able to experience this true wilderness just 15 minutes from home. I can’t wait to go back again. There are always new things to see and experience.

Closure of this park mainly impacts the maintenance of infrastructure of the day use overlook sites and cairn. Since these sites are also funded through partnerships, the ongoing garbage and grading will be maintained by Northern Sunrise County and therefore day use of these very popular sites continues. As for the winter access, it continues whether the park is officially closed or not. Parks has only invested in one development of access into the valley and that was a short lived wooden staircase that was eventually removed due to it being more of a hazard then a benefit to summer hikers. Other than a significant investment in boundary markers around the parks perimeter, the park remains a pristine wilderness similar to the time Dr. Greene lobbied for its current status, 80 years ago. In recent years, winter use has actually increasing substantially as word spreads and local nature and Facebook pages inform and provide pictures of the adventures so close to home. The valley continues to be an island of pristine habitat seeding the surrounding areas with a variety of wildlife; even to the dismay of some people, providing wildlife experiences right in town.

David T. Walty is a retired Alberta Fish and Wildlife biologist who lives on a ranch just outside of Peace River, Alberta.

Minister Nixon gave Greene Valley Provincial Park a reprieve from permanent closure, opening it to day use as of June 1, 2020 as part of the province’s response to COVID-19. But, his department underlined this was no more than temporary: “This is a temporary measure for this camping season.”