Fortress Mountain and the False Promise of Public Participation in Alberta 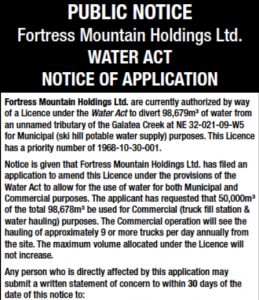 The AWA has closely monitored the application by Fortress Mountain Ski Hill for an amendment to its water license which – as of October 25, 2019 – now authorizes Fortress to remove up to 50 million litres of water annually from a tributary of Galatea Creek in Kananaskis Country and sell it as bottled water in the retail consumer market. Carolyn Campbell has reported on this proposal, setting out the numerous environmental concerns associated with it (see the September and December 2019 Wild Lands Advocate). Along with this water license amendment, Fortress has public lands authorization to construct and operate infrastructure to divert the water, store it in a reservoir, and fill water transport trucks. Fortress has stated that an average of 9 truckloads per day of diverted water would be transported to a bottling facility in southern Alberta.

The manner in which public input was (dis)regarded in this approval process illustrates yet again the false promise of public participation found in Alberta’s legal and policy framework for decisions concerning the development of natural resources and the assessment of that development’s environmental impacts. Despite statements of purpose in legislation such as the Environmental Protection and Enhancement Act (Alberta) which speak to providing Albertans with an opportunity to give input on decisions affecting the environment, nothing could be further from the truth in this province. The department of Alberta Environment and Parks (AEP) typically authorizes projects with very little transparency and without any opportunity for public input. The Fortress decision is case-in-point. I recently had an opportunity to review AEP records concerning the Fortress approvals, records which are publicly available on request but are not readily available online. These records paint a very clear picture of how little regard there was for public input in this process.

Fortress applied for the amendment to its water license under the Water Act (Alberta) on August 1, 2018. After what appears to be several months of back and forth, AEP wrote to Fortress on October 30, 2018 indicating that additional information was needed before the application would be considered. Among these requests, AEP sought information to support the water bottling proposal including whether diversion from the source tributary would be seasonal or year-round, where the diversion would occur, and how the water would be transported to the bottling facility. At some point thereafter, Fortress confirmed that diversion for bottling would be year-round. AEP then sought additional information by way of correspondence sent on January 25, 2019. In particular, AEP asked for details concerning:

On February 25, 2019, AEP informed Fortress of the additional public land use authorizations needed for the water bottling proposal and what information Fortress would have to submit in that regard. Much of this information related to the proposed transfer/fill station and truck transportation of the diverted water. Fortress requested that the water license amendment be processed concurrently with these additional consents and approvals needed under the Public Lands Act (Alberta). At some point between late February and early July 2019, AEP completed its ‘technical review’ of the application. Although, as noted below it appears many technical details on the impacts of this proposal had yet to be fully considered in this ‘technical review’.

On July 4, 2019, AEP directed Fortress to give public notice of its proposal.  These directions included a requirement for a one-time notice in the Rocky Mountain Outlook newspaper, as well as a posting on the gated access road to Fortress and at the Barrier Lake Visitor Centre along highway 40 at the entrance to Kananaskis Country. AEP also suggested how the public notice should be worded, including text that indicated any person who is directly affected by the application may submit a statement of concern to AEP within 30 days of the notice.

Several observations are immediately apparent about the content of this public notice. Most obviously, the notice provides almost no details about the application and makes no reference whatsoever to the very purpose of this application: water bottling for the consumer market. This deficiency is remarkable given that AEP staff themselves had specifically raised concerns and sought more details about the bottling proposal from the outset.

Similarly, there is no reference in the notice or even suggestions about the proposal’s possible environmental impacts; this silence exists despite the fact that AEP staff had completed their ‘technical review’ of the application and, as internal records demonstrate, by this time AEP staff were aware of the possible environmental impacts. While the notice states further information can be obtained from Fortress or AEP, the public is left to guess what might be available. And the AEP record includes an internal AEP memo written on July 23, 2019 that suggests some reluctance on the part of Fortress to disclose additional information during the 30-day comment period.

The notice also references the ‘directly affected’ test for public participation in Alberta concerning environmental decision-making. As many readers will know from actual experience, this is the test used by AEP to exclude, rather than include, the public from decisions with possible environmental impacts. As is typical with AEP generally, none of the filers of statements of concern were found to be directly affected by the Fortress application. This is because AEP insists that in order to be ‘directly affected’ one must establish that they live or use a natural resource in close proximity to the approved activity. In short, AEP applies a test that nobody can meet for a project such as this one which is located on public lands in Kananaskis Country. In my view, this application of the ‘directly affected’ test by AEP must be unlawful in light of the statements of purpose in its governing legislation.

How is a member of the public even to know about these thresholds for participation when AEP requires the Fortress public notice to contain so little information? There is absolutely no reference to a ‘residency’ or ‘use’ requirement in the governing legislation for this process. In any event, such requirements are clearly impossible to meet for just about anybody concerned about a project in Kananaskis Country. Many public concerns focused on the removal of water for consumer bottling and, while this concern may not fall clearly within the mandate of the Water Act, it is surely within the mandate of the Environmental Protection and Enhancement Act. Given how little is disclosed in the public notice, it really seems like a ‘slap in the face’ to public participation for AEP to dismiss concerns for failing to give sufficient information!

For example, statements of concern filed by the public identified the potential for adverse impacts to wildlife from truck traffic associated with this proposal, and within AEP similar concerns were being discussed and communicated to Fortress.   AEP records indicate that on July 16, 2019 – during the public comment period – Fortress was informed that AEP was considering a seasonal closure on truck traffic between May 1 and June 15 each year because the subject lands are located within core grizzly bear habitat.  On August 29, 2019, a senior wildlife biologist with AEP was asked to opine on the potential impacts to wildlife arising from the transfer/fill station and truck traffic on the Fortress access road. In correspondence sent September 10, 2019, the wildlife biologist answered that the impact of the transfer/fill station will be low because it is located on a previously disturbed site. However, the biologist stated truck traffic on the access road during the summer was a concern and that this will have impacts on wildlife. The public lands authorization issued to Fortress for the transfer/fill station on October 25 did include a condition of no activity between May 1 and June 15, but there does not appear to be any explanation on the record for why this is sufficient to mitigate adverse impacts to wildlife.

In my view, the Fortress application should have been subjected to an open and transparent environmental impact assessment process right from the start. The application was destined to be controversial because of its potential adverse environmental impacts located in the highly valued lands of Kananaskis Country, and these impacts are clearly of significant concern to many Albertans. Not only would an open and transparent environmental impact assessment process have given the public a meaningful forum to raise concerns with the proposal, it would also have provided Fortress with more predictability over the issues it would need to address and the overall timeframe for doing so. As a further benefit, such a process would also have provided some legitimacy to the ultimate decision here. As it stands now, Fortress has the legal authorizations it needs to bottle Kananaskis water but its social license to do so remains in doubt.

Shaun Fluker is an Associate Professor in the Faculty of Law at the University of Calgary. He also is the Executive Director of the Faculty’s Public Interest Law Clinic. His research focuses, in part, on public participation and community engagement with natural resources/environmental decision-making.