The securities market, Atrum’s main source of cash, has dried up. Atrum told the ASX in December 2020 it expected to raise $20.6 million from selling 103 million share options. Reinstating the Coal Policy killed that deal; Atrum’s underwriters terminated the agreement. Instead of raising more than $20 million the sale of these options only raised $183,000.

AWA hopes High River Mayor Craig Snodgrass, Councillor Bruce Masterman, and other members of Council ask Atrum how much of its remaining cash it will devote to reclaiming the damage to the land already caused by Atrum’s exploration activities.

This question also should be put to Energy Minister Savage and the Alberta Energy Regulator.

The figure below, taken from Atrum’s 2020 Annual Report, underlines how much damage Atrum’s road construction and drilling activities did in 2019/2020 to just six square kilometres on its Isolation South property. Note that Isolation South, the project Atrum hopes to first exploit, literally is perched on the north bank of the Oldman River.

The company’s most recent Quarterly Cash Flow report stated the company will be considering the cash it needs to address “stakeholder engagement priorities” related to the provincial coal consultation.

“Since Albertans have underlined emphatically their concern about the damage to the land that Atrum has so far caused,” said Urquhart, “the company should be devoting the lion’s share of its remaining cash to restoring those lands, not to public relations.” 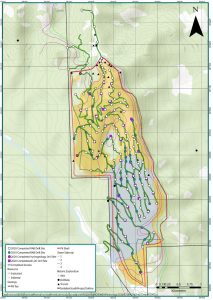