Ecological integrity – Section 8 (2) of the Canada National Parks Act clearly states that ecological integrity must be the Environment and Climate Change Minister’s first priority when it comes to all management activities in our national parks.

Parks Canada’s current departmental plan suggests otherwise. The percentage of the Parks Canada budget devoted to preserving ecological integrity (Heritage Resources Conservation) will continue the debilitating decline that started under the Harper Conservative government. In the 2011/12 fiscal year 23.4 percent of the Parks Canada budget was devoted to the Heritage Resources Conservation program; by the 2019/20 fiscal year this will fall to 13.8 percent.

Coincident with Heritage Resources Conservation’s fall from grace has been a dramatic increase in Parks Canada’s commitment to spend money on infrastructure such as highways. Infrastructure spending is expected to consume 36 percent of the budget in 2019/20 – double the percentage devoted to infrastructure in 2011/12.

AWA has no doubt that more pavement doesn’t promote the Minister’s first priority – ecological integrity. We have expressed this concern to the Hon. Catherine McKenna, Canada’s Environment and Climate Change minister.  See our letter to Minister McKenna here. 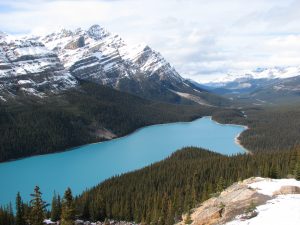 Please join AWA in urging Minister McKenna to increase Parks Canada’s commitment to the Heritage Resources Conservation program and ecological integrity. I would appreciate receiving any copies of your letters or emails you would share with me at iurquhart@abwild.ca.

Write to the Hon. Catherine McKenna, Canada’s Minister of Environment and Climate Change at  ec.ministre-minister.ec@canada.ca and urge the Trudeau government to increase the importance of the Heritage Resources Conservation program in the Parks Canada budget.

Read articles from past issues of AWA’s magazine, Wild Lands Advocate, detailing how Parks Canada’s commitment to ecological has shrank. In particular see: “The $87 Million Icefields Trail – Really?” (March 2017)  and “Canada’s National Parks: We Celebrated Them in 2011, Eviscerated them in 2012,” (February 2013, Vol. 21, No. 1)