This weekend might be an especially crucial time to email your MLA, Premier Jason Kenney, Energy Minister Sonya Savage, and Environment and Parks Nixon about Re-Instating the 1976 Coal Policy.

AWA believes the Kenney government has felt the pressure. In this Global News story, Energy Minister Sonya Savage’s office declined to comment but went on to say “we hope to be sharing something soon.” We hope this is a signal that the Kenney government is seriously  considering backtracking on the spring decision to revoke the policy. Pressure this weekend might push her and the government to do the right thing: admit that revoking the policy was a major mistake and correct it.

On Tuesday the Coal Policy goes to court. At issue is the government’s failure to consult with anyone, other than the coal industry, before revoking the Coal Policy. AWA, represented by Clint Docken, Q.C. of Guardian Law, has applied to intervene in the case.

Revoking the policy has opened to the door to open-pit strip-mining in lands where open-pit mining had effectively been prohibited (the Coal Policy designated these lands as Category 2 Lands). In addition to their beauty, these landscapes constitute vital habitat for threatened species such as grizzly bears (The first of two maps accompanying this call to action?? shows what a significant swath of the Rockies/Foothills were Category 2 Lands and how important these lands are for grizzlies.)

In this Calgary Herald article Minister Nixon says the province won’t allow a “free for all” and that he doesn’t think his government “would tolerate the fact that there would be dozens of mines across the eastern slopes.” Surely he knows that, by rescinding the Coal Policy, his government made it possible for all of the projects associated with the leases shown on the second map below to apply for approval. TEN projects are linked with those leases. How many mines will it take to destroy the remnants of westslope cutthroat critical habitat in the Eastern Slopes? How many mines will it take to destroy the tourism and recreation appeal of our southern Rockies and foothills? One? Two? Certainly far fewer than the dozens the Minister seems unable to tolerate.

As AWA argued when the Lougheed government was drafting the Coal Policy, and every day since, that policy struck a valuable balance between coal mining and protecting landscapes that are at the heart of Alberta’s identity. Please take a few minutes this weekend and tell that to our elected officials.

The photo on our news items page is © C. Wershler. Cleve’s photo is an overview of the 1989 Oldman River Concert where 8,000 people came to celebrate a free-flowing Oldman River with Ian Tyson, Sylvia Tyson, Gordon Lightfoot, Murray McLauchlan, Andy Russell, David Suzuki and others.

Minister of Environment and Parks,

You can find out how to contact your own MLA here. 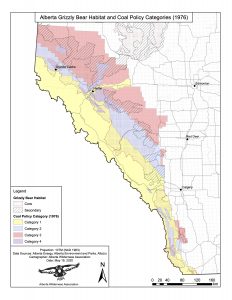 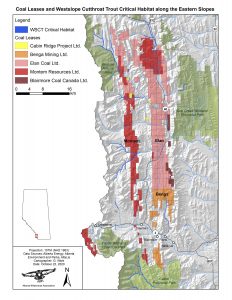