Do you  remember  when  you were 17 years old? Do you remember that time, as a 17-year old, when you stood before a room of professionals and experts and spoke to them about “their” issues, issues they thought about and dealt with on a daily basis? If you’re like me, you might be able to remember some of your experiences as a 17year old, but those experiences likely won’t include speaking to a roomful of experts. Not many of us had the opportunity, or the nerve, to try the latter.

Let me introduce you then to Courtney Taylor, a 17-year old from the County of Warner in southern Alberta. Courtney  is the first Canadian high school student to win the Society for Range Management’s High School Youth Forum competition. The High School Youth Forum has been part of the Society’s activities for more than 50 years now. The competition asks high school students to make a six to eight-minute formal presentation based on a paper they have written on a range related topic. Judges then pose questions to the students after they have made their presentations.

The Society for Range Management is composed of 21 sections. Most sections coincide with the boundaries of American states such as Colorado or Idaho; some, such as the Pacific Northwest, International Mountain, and Northern Great Plains, are transboundary and have members from both Canadian provinces and American states. Mexico is the only national section. Courtney represented the International Mountain section (Alberta and Montana) in the 2018 competition held as part of the Society’s annual meeting held in Sparks Nevada. 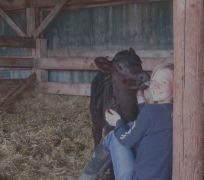 Courtney and her calf… no enjoyment in that relationship PHOTO: © R. TAYLOR

The educational dimension of the competition makes winners of all the students who participate in the Forum. The presentations that Courtney and the other students gave were based on papers they had written in collaboration with the Society’s members. In Courtney’s words, Tracy Kupchenko and Tim Romanow “really helped me put my presentation together.” Tracy is the acting-president of the International Mountain section and a Senior Reclamation Assessor with the Alberta Energy Regulator; Tim is the Executive Director of the Milk River Watershed Council.

Tracy enjoyed working with Courtney on her presentation and it’s clear to me why that would have been the case. Eager to learn, witty, charismatic, able to use personal experiences to communicate clearly scientific information – these are some of the qualities Tracy sees in Courtney. Combine those qualities with a deep appreciation for wildlife and biodiversity and it’s easy to see why Tracy would call Courtney “a bright shining light.”

As part of her final preparations for her trip to Sparks, Courtney offered a dry-run of her presentation to the annual meeting of the Prairie Conservation Forum in mid-January. Courtney’s paper and presentation, entitled   “Sustainable   Range Management,” dealt with a subject dear to the hearts of Courtney and her family as well as Alberta Wilderness Association members. The Taylors ranch close to the Milk River Ridge area south of Magrath. AWA regards the Ridge as internationally significant grassland. Ross Lake roughly marks the western boundary of the Ridge; the Twin River Heritage Rangeland sits on its eastern boundary.

Courtney’s paper outlined some of the practices the Taylors use to try to realize healthy bottom lines – for both the rancher and the native prairie landscape. Skim grazing was one of the practices Courtney helped me to learn more about. Bales of tame grass (non-native grass), used to feed cattle in the winter, and may introduce non-native plant/grass species into a native prairie pasture. Courtney spoke about how, on some of their pastures, straight lines of timothy or bromegrass are a legacy left behind by previous owners who placed bales of tame grass on the native prairie. As she pointed out to me, tame grasses didn’t arrive across the Alberta prairie only courtesy of ranchers using bales to feed cattle in the winter. The history of oil and gas exploitation across the grasslands is one where planting exotic grasses such as crested wheatgrass on native prairie was a common policy and practice when it came to revegetating lands disturbed by the need to slake our thirst for petroleum.

Skim grazing the tame grasses is a grass species management practice that improves the competitiveness of the native grasses, increasing their abilities to go to seed and flourish. I asked Courtney why improving native grass competitiveness was important. She explained that a native grass “dries on the stem and keeps its nutrients in the grass so you can utilize it later on in the year.” So maintaining the health of native grasses on the prairie plays an important role in how you manage your cattle on the range over the course of a year. Courtney also stressed how important riparian area management is to the Taylors’ vision of sustainable range management. Situated in the headwaters of their watershed the Taylors realize how important riparian area management is for both their ranch and the downstream lands of others. She reminded those of us at the Prairie Conservation Forum meeting that sometimes it’s very simple to promote sustainability on the land. For example, consider the placement of mineral salt blocks. The Taylors don’t follow what some regarded as the preferred method for providing salt to cattle – using a stationary salt shack. Instead, they rotate salt blocks in the pastures. Courtney delights in finding some thistle to put salt blocks in. The cattle stress the thistle as they use the block and this reduces the spread of another unwanted plant species.

It’s also apparent that, when it comes to riparian areas on their ranchlands, the Taylors go the extra mile in order to promote a healthy landscape. One part of their property had been used essentially as a graveyard for old cars and machinery; the Taylors restored the riparian health of that area. Their efforts are good for both wildlife and cattle. The restoration work has contributed to the fact the Taylor ranchlands are a premier nesting site for pintail ducks in Alberta. “By ensuring that that riparian area remains healthy,” Courtney said, “when we turn out cows there in the fall they have somewhere to drink.” Fencing is another activity that Courtney feels is done on her ranch in ways that benefit pronghorn and deer. Raising the lowest fence wires allows pronghorn to pass under the fence; since pronghorn cannot jump over fences this ensures that fences won’t be an obstacle to migrating pronghorn. The top strand can be lowered in order to make it easier for deer to jump the fence while ensuring that cattle remain where the Taylors want them.

The Aldo Leopold Foundation describes Leopold’s famous land ethic, the moral responsibility Leopold thought we have to the natural world, this way: “At its core, the idea of a land ethic is simply caring: about people, about land, and about strengthening the relationships between them.” At several points in our conversation Courtney used language that illustrated how important this land ethic is in her background and to her approach to range management. “Everything’s connected,” she said, “when you take care of the land the land takes care of you.” Or, when we were talking about pintail ducks, she said “what we do is to try to keep disturbances away from them.” This attitude animates their ranching operations as well as their views of projects such as power lines and wind farms. What can we, as a society, do to foster the passion, knowledge, and appreciation found in the Courtney Taylors of the world? Here Courtney takes me back to a formative experience in her life – Southern Alberta Youth Range Days. This three-day summer program had a tremendous impact on Courtney.

The landscape the Taylors care for. PHOTO: © C. TAYLOR

Winning the Top Hand award in the last year she attended the program put her on the path that ended with her participation and win in the high school competition in Sparks. Interacting with professionals who pass along amazing facts about a wide range of subjects – from ferruginous hawks to blue grama grass – inspired Courtney and strengthened her already existing interest in sustainable range management. Courtney corrected me when I suggested that Youth Range Days would help the next generation of ranchers to embrace the land ethic that her parents have helped to instill in her. “I’d say just help the next generation…period,” she said, “not the next generation of ranchers because lots of the kids that come don’t have a ranch, don’t have any cows. They’re just interested and they want to make a difference and they want to learn. That’s exactly what should be promoted through programs like this.”

With one year left to go in high school Courtney plans to pursue an Agricultural Business degree after graduation. After that I’m betting you’ll see her back on the ranch, raising the cattle she is so passionate about. It’s impossible to miss her passion for ranching when she says: “There’s nothing better to me than a little baby calf with a milk moustache running around his mom. That’s my favourite thing in the world.” In Courtney’s mind, the sustainable range management perspective she values and wants to practice will let her enjoy generations of those calves well into the future. A future nurtured from Courtney’s perspective also will be a future with many benefits for wildlife and the landscapes they roam.

Southern Alberta Youth Range Days 2018 Southern Alberta Youth Range Days will be held this year from July 10th to July 12th at the Rangeview Ranch in Cardston County. If you would like more information about the event and the 2018 draft agenda please contact either Kandra Forbes at the Milk River Watershed Council Canada at (403) 647-4306 or Stephen Bevans at Cardston County. His telephone number is (403) 634-9474.