Alberta Wilderness Association strongly opposes the proposal to legalize elk hunt farms – fenced facilities where captive elk are shot by so-called “hunters.” The Alberta Elk Commission has lobbied the Alberta government on hunt farms – what they call “cervid harvesting preserves” – since at least May 2020.

“These hunt farms are unethical and contrary to the concept of fair chase,” says Devon Earl, Conservation Specialist at AWA. “Many hunters and non-hunters alike are appalled by the idea of shooting animals that are effectively penned with little to no ability to escape.”

Furthermore, AWA believes hunt farms will very likely spread chronic wasting disease in wild ungulate populations. “Animals in game farms are raised in close proximity to one another, unlike their wild counterparts,” said Earl. “This makes them especially susceptible to disease, which may be passed on to wild populations. Chronic wasting disease, now prevalent in the wild deer population, is a fatal prion disease first identified in game farms in Alberta in 2002. The disease likely was introduced to Canada through game farming.” AWA has long opposed game farming for this reason. 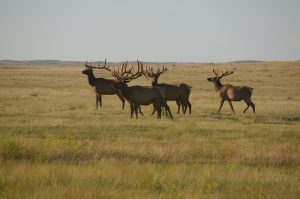 AWA’s concerns that Alberta is taking this proposal seriously are fueled by the government’s August 2021 recreational hunting survey. That survey opened the door to these hunt farms. It asked respondents if the government should “explore innovative tools to improve hunting opportunities on public and private lands.”

“The phrase ‘cervid harvesting preserves’ is a classic example of Orwellian doublespeak,” said Ian Urquhart, AWA’s Executive Director. “Given the Elk Commission’s efforts to lobby the government on the hunt farm issue for the past sixteen months,” he said, “the government’s survey should have been more forthcoming and told the public that hunt farms were an ‘innovative tool’ it might consider implementing.”

AWA has registered its objections over this and other aspects of the government’s recreational hunting vision with Alberta Environment and Parks Minister Nixon. For AWA’s letter to Minister Nixon see: