In the coming weeks, the Alberta government is expected to decide whether to honour the phase-out of motorized recreation in southern Alberta’s Castle Parks per the Castle Management Plan or to backslide and make changes to allow this damaging form of recreation to continue. Based on the high ecological impacts, and Albertans’ strong support for a complete phase-out, Alberta Wilderness Association (AWA) and the Castle-Crown Wilderness Coalition urge the Alberta government to remove off-highway vehicle (OHV) recreation trails in the Castle. 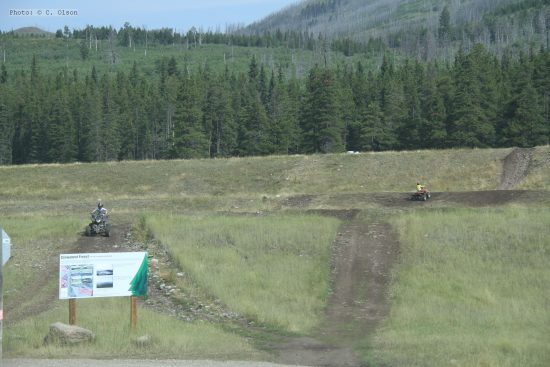 “With some 10,000 people contributing, the consultations that led to final Castle Management Plan were the largest in Alberta history”, says Gordon Petersen of the Castle-Crown Wilderness Coalition. “And the result is clear. A significant majority of Albertans approve of the Castle Management Plan as written, including the complete phase-out of motorized recreation.”

“OHV trails present an unjustified threat to the sensitive and valuable landscapes in the Castle Parks”, says Devon Earl of the Alberta Wilderness Association. “It would be a tragedy for all Albertans if this area continues to be disrespected and degraded by this high-impact use.”

The Castle Management Plan, released in May 2018 states that “summer recreational OHV use is incompatible with the conservation objectives for Castle Provincial Park and Castle Wildland Provincial Park.” This statement is backed by substantial scientific research indicating that continued OHV use in the Castle Parks would likely result in continuing negative impacts to vegetation, water quality, and wildlife.

In July 2019, the Government of Alberta decided to pause and reconsider the phase-out of motorized recreation in the Castle Parks, despite the clear, ongoing threats OHV use pose to critical Westslope Cutthroat Trout and Grizzly Bear habitat. While OHV trails remain in use, populations of these important species struggle to subsist.

A Government of Alberta study conducted in 2017 found there were over 2,000 kilometers of linear footprint and 1,600 instances where linear footprint such as OHV trails cross streams in the Castle Parks. OHVs that are driven through waterways destroy fish habitat and the trails themselves are detrimental to Westslope Cutthroat Trout and other fish because they increase sediment runoff into streams. Sediment kills eggs and reduces the reproductive ability and survival of adult fish. Motorized access in core Grizzly Bear habitat increases human-bear encounters, and fragments the habitat that they rely upon to survive.

The Castle Management Plan was a huge step in the right direction for protecting wild spaces in Alberta’s vital Eastern slopes. The Castle wilderness is incredibly valuable both ecologically and as important headwaters to the Oldman River basin. Responsible recreation should be guided by scientific research, and meaningful public and Indigenous consultation. While OHV use on designated trails may be compatible with land-use and conservation goals in certain areas, it is not compatible with the particularly sensitive landscape in the Castle Parks.

Alberta Wilderness Association asks Albertans to defend Castle Parks by respectfully writing to Minister Jason Nixon (send to: aep.minister@gov.ab.ca and copy dearl@abwild.ca). Please voice your support for implementing the Castle Management Plan as written including the complete phase-out of OHVs to protect critical threatened Westslope Cutthroat Trout habitat, core Grizzly Bear habitat, and essential headwater resources. Take a few minutes to send a strong message to the Government of Alberta that we must protect Castle Parks!