Global Forest Watch Canada’s (GFWC) newly released study indicates that the remaining intact forests in the proposed Castle Provincial Park have been significantly reduced.  Between 2000 and 2015, 76% of the forests became disturbed landscapes and are no longer secure habitat and watersheds.

“As a result of human use, there has been extensive disturbance and fragmentation of the forest ecosystem and wildlife habitat in the Castle,” said Andrea Hlady, President of the Castle-Crown Wilderness Coalition. “Intact forest landscapes, so critical to the health of our parks and watersheds have been reduced. The Government of Alberta curtailed logging in the Castle parks last September, taking a vital first step to restoration.”

“There is strong scientific evidence and support for banning off-highway vehicles in sensitive landscapes and AWA believes they have no place in Alberta’s provincial parks” said Joanna Skrajny, Alberta Wilderness Association (AWA) Conservation Specialist.  “Allowing OHV recreation and other destructive activities to continue is a disaster for the ecological health of the Castle. The GFWC analysis highlights active restoration of the Castle Parks is required to meet the full ecological potential of this landscape.”

The area is in high demand and has a long history of multiple uses, including commercial forestry operations, oil and gas development, grazing, and recreation. The Castle is one of the most biologically diverse areas in Alberta, with more than 200 rare or at-risk species including whitebark pine, wolverine, bull trout, and westslope cutthroat trout. The announced Castle protected areas encompass core Grizzly conservation zones and are important movement corridors for large mammals, including grizzly bear. The area contains significant watersheds, supplying water downstream to many Alberta communities, including Lethbridge and 70 other municipalities.

Joanna Skrajny of the AWA continued, “So far, the Alberta Government has given no indication that off-highway vehicles will be banned in the Castle, despite the fact Premier Notley committed to fully protecting the Castle Wilderness Area in her 2015 election platform.” 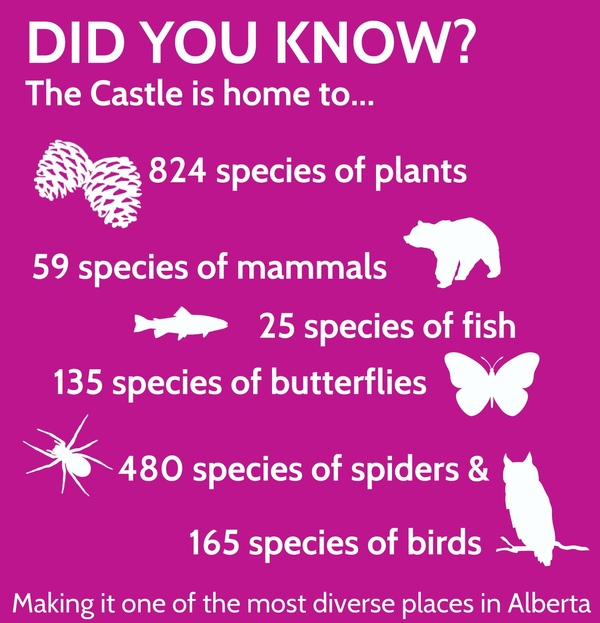