Yesterday, Energy Minister Sonya Savage delivered a small, but important, reward to the thousands of Albertans and Canadians who have objected to the provincial government’s unilateral decision to revoke the 1976 Coal Policy. She announced that 11 leases sold in December would be cancelled. She also announced a “pause” in offering more lease parcels for sale in the Coal Policy’s Category 2 lands.

“Over the past several weeks we have witnessed a tremendous outpouring of public opposition to open-pit coal mining in Alberta’s Eastern Slopes,” said Ian Urquhart, AWA Conservation Director. “These landscapes, central to Alberta’s identity, deserved nothing less.”

While any step back from coal mining in the Eastern Slopes should be welcomed, Albertans should not believe that Minister Savage’s decision re-instates the 1976 Coal Policy that offered absolute protection to those lands. It doesn’t. That protection only will be guaranteed if the Coal Policy’s de facto prohibition on any surface mining in Category 2 Lands is revived.

“In order to gauge the impact of this announcement on the Eastern Slopes, the Minister needs to provide a list of projects that will be exempt from this decision,” said Urquhart. Ten of thousands of hectares of coal leases already existed in the Rockies and Foothills before the December lease sales. The cancelled leases only amount to a very tiny sliver of the lands (1,853 hectares) where the government would allow surface-mining in the absence of the Coal Policy.

Albertans need to know how many of the existing leases will be affected by yesterday’s announcement. “The Minister’s announcement, Urquhart said, “only will offer cold comfort to the Albertans who have spoken out about the Coal Policy if it doesn’t apply to already leased lands in the Rockies and Foothills.” 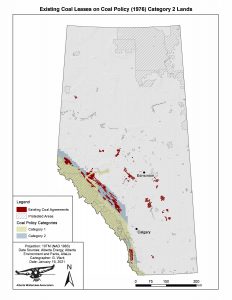