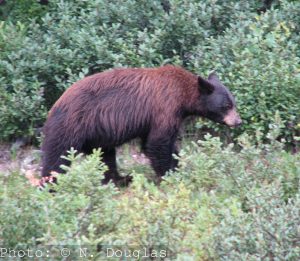 “We’re always taught, don’t feed the bears,” says Devon Earl, AWA conservation specialist. “Luring black bears with food is both unethical and unsafe. This practice should be outlawed throughout the province and certainly should not be extended into protected areas.”

AWA supports hunting as compatible with the intent of Wildland Provincial Parks and certain other protected areas when done sustainably and in accordance with responsible hunting practices. However, this should not include bear baiting and the use of off-leash hunting dogs to range long distances from their owner to tree a cougar. Protected areas range in their purposes, but generally are set aside for the purposes of conserving landscapes, natural and historic attributes, wildlife and wildlife habitat, and to provide for recreation opportunities. AWA believes that allowing these forms of hunting within these areas does not align with the broader intent of protected areas.

Bear baiting is unsafe for people and bears because it can contribute to habituation of bears to humans and human food. The public and tourists are warned not to feed bears and to lock up attractants, and can be fined for not doing so. Allowing hunters to bait black bears contradicts these safety measures. Bear baiting is also contrary to the concept of fair chase, making it unethical.

Off-leash hunting dogs can pose a threat to wildlife and species-at-risk. Even well-trained hunting dogs may go after an animal that is not supposed to be hunted, or is at risk of extinction. Protected areas should be a refuge where these animals are safe, and this added threat of hunting dogs should not be introduced.

This directive was introduced under the provisions of Bill 21, the Red Tape Reduction Statutes Amendment Act. AWA previously raised concerns about so-called “Red Tape Reduction” and it’s potential to degrade important environmental protections in our parks and public lands.

“Concerningly, there was no public consultation prior to this new directive being introduced.” Says Devon Earl, AWA conservation specialist. “Albertans deserve a say in what happens to our parks and protected areas that are being held in trust for future generations to enjoy.”

The directive will also allow the use of off-leash herding dogs in grazing dispositions within protected areas. Though not in opposition to the use of herding dogs in these circumstances, AWA will monitor for any unintended consequences of this change.