Two new parks were declared in the Castle on September 4, 2015. It has been about 50 years in the making and it was an announcement we all received with praise for the government’s decision and intent to protect this valuable wilderness. We shared excitement with many colleagues and individuals who have hoped for this designation. Since the announcement we have begun anticipating what the new parks would mean to future generations and ecosystem integrity. We are writing today to invite you to participate by completing a simple online consultation survey the government launched the same day as the announcement and to include written comments about the values you have for these two new parks.

Please email a copy of your comments to me; I look forward to hearing from you,
– Sean Nichols, AWA Conservation Specialist

Earlier this month, the Government of Alberta announced the designation of two new parks in the Castle region of southwest Alberta: one a Provincial Park and the other a Wildland Provincial Park. Together these two parks will encompass nearly 1,050 km² of sensitive wilderness area. AWA has been advocating for the protection of this area since our founding in 1965, and we are greatly encouraged to now see what is potentially the best chance in 50 years to see that protection come to fruition.

Although the headline-grabbing announcement has come and gone, now is the time for the real work to begin. And the Castle needs your help. The real measure of protection for these two Castle parks will not be in their name, but in the real-world actions and policies undertaken as a part of the parks’ management plans. Those management plans will be drafted over the next several months and right now the government is asking for feedback from all Albertans regarding their priorities for these parks. That feedback will help shape the management plans.

The provincial government is to be congratulated for ending commercial forestry, coal and mineral extraction, and new surface access to oil and gas developments in the parks. At the same time, their list of planned land designations in the parks contains some activities, such as motorized recreation, grazing and hunting. When some of these activities are allowed to continue, the restoration that this fragile land needs cannot occur, and the already-damaged ecosystem will continue to degrade.

With the initial information we have from Alberta Environment and Parks (AEP), the designation exemplifies when a park is not a park. The protection outlined in early September may be more symbolic than substantive.

We are asking you to send your thoughts and perceptions to the Government of Alberta to encourage them to take seriously the environmental protection of this area in their management plans, and not to allow highly destructive activities.

The Alberta Environment and Parks feedback for the Castle parks is here. It includes:

Feedback is being accepted until Monday October 5, 2015.

Helpful resources that you may wish to reference when crafting your feedback:

We hope that you will look over the above references, as well as AWA’s recommendations listed below, and use the online form to send an email to ParkNews@gov.ab.ca, AEP Minister Phillips, and Premier Notley encouraging appropriate management of these parks and the promised protection.

As always, AWA appreciates knowing your thoughts and ideas and being copied on any letters and submissions, at snichols@abwild.ca.

AWA’s concerns and recommendations, as covered in our official submission, include the following:

Restoration Wilderness
Restoration of this keystone area must be a primary goal to achieve full protection as promised on September 4, 2015.

Headwaters Security
Headwater protection within the Castle is a crucial component of securing clean and clear water for downstream communities.

Roadless Areas
Roadless areas are an intrinsic requirement for wilderness areas and are vital for the protection of native ecosystems. Linear disturbance in the Castle must be reduced and recovered.

Invasive Plant Species
The most serious threat to rare plants in the Castle area is weeds and other non-native plants. These invasive plants must be dealt with to protect the truly rare and endangered plant species found in the Castle.

Random camping
Random camping can be an appropriate and a supportive recreational use of a wilderness landscape, however it must be managed carefully with enforcement to prevent abuse of this provision.

Hunting
Hunting should not be allowed in the Castle Provincial Park.

Livestock Grazing
Livestock grazing needs to be curtailed throughout the Castle, and eliminated from the upland sub-alpine and alpine areas. Reduced stocking rates may be required and should be disallowed in the Provincial Park.

Off-Highway Vehicle Use
Off-highway vehicle use is damaging to the environment and is damaging to nearly all wildlife species including, sensitive and threatened species. It disrupts the wilderness experience for other park-goers and should not be allowed in either of the Castle parks.

Native Species Protection
A focus on native species protection is of paramount importance for these new parks. Native species habitat is highly negatively impacted by dense networks of trails and other linear disturbances, such as those that exist in the Castle currently. These networks must be clawed back.

Adventure Experiences
Urbanization of wilderness must be avoided. Fixed roof structures of any kind, or associated “adventure tourism experiences” are not appropriate within the Wildland Provincial Park.

Highway-side and other Retail Services
Highway-side regions inside the park boundaries are best left undeveloped and gateway community development encouraged.

Transition Zone
For parks to be effective at providing ecological protection from impacts of industry there needs to be an effective transition zone between the areas intended to provide that protection, and those where industry is allowed to continue.

Enforcement
All activities and land uses in the Castle parks will need monitoring and consistent empowered enforcement. 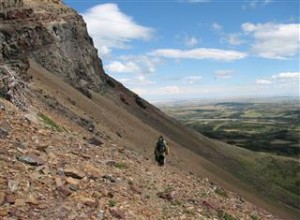