Re: Addition of Athabasca Rainbow Trout to the List of Wildlife Species at Risk as Endangered

To Whom it May Concern,

Alberta Wilderness Association (AWA) appreciates the opportunity to respond to the proposed listing of Athabasca Rainbow Trout (Oncorhynchus mykiss), as Endangered under the Species at Risk Act (SARA).

AWA, founded in 1965, works throughout Alberta towards more representative and connected protection of the unique and vital landscapes that are the source of our clean water, clean air and vital habitat for wildlife in each of our six natural regions. With over 7,000 members and supporters in Alberta and across Canada, AWA remains committed to assuring protection of wildlife and wild places in Alberta for all Canadians.

Athabasca Rainbow Trout are found throughout the headwaters of the Athabasca River system and its major tributaries in western Alberta. These fish are native to western North America and are different from introduced Rainbow Trout populations in that they have slower growth rates, mature at smaller sizes, and are uniquely adapted to the small, cold and unproductive headwater streams in Alberta.

The COSEWIC assessment of Rainbow Trout, Athabasca River Populations, has designated the species as Endangered as of May 2014. They are considered applicable for this designation under Criterion A4, where there must be at least a 50% estimated reduction in mature individuals over 3 generations. COSEWIC’s 2014 ” Assessment and Status Report on the Rainbow Trout (Oncorhynchus mykiss) in Canada” outlines that in fact, Athabasca Rainbow Trout have an estimated 90% decline over 3 generations due to habitat loss and degradation from resource extraction and agricultural practices. Other threats include climate change, habitat fragmentation, as well as competition and hybridization with other fish species.

Designation of a species as Endangered means the wildlife species is “facing imminent extirpation or extinction”. AWA is strongly supportive of COSEWIC’s status assessment and urges the Government of Canada to add this species to the List of Wildlife Species at Risk (Schedule 1) under the Species at Risk Act. AWA urges that the designation of Athabasca Rainbow Trout as Endangered will help to protect other native trout species present in the Athabasca watershed and will also have numerous additional benefits to other wildlife species at risk, both aquatic and terrestrial. Protection of this species and its habitat will have the additional benefits of protecting Alberta’s headwaters and watersheds, by reducing the severity of flood and drought events and ensuring a clean drinking water supply for municipalities downstream. There is also intrinsic ecological and cultural benefit to protecting a species which has survived an Ice Age and is uniquely adapted to the harsh conditions of Northern Alberta Headwaters.

AWA strongly believes it is very important that

AWA looks forward to the listing of Athabasca Rainbow Trout under SARA.

Caribou in the Little Smoky and A La Peche Ranges would benefit from the listing of Athabasca Rainbow Trout as Endangered, as would other threatened native trout. This map (below) shows where the species’ habitats overlap. 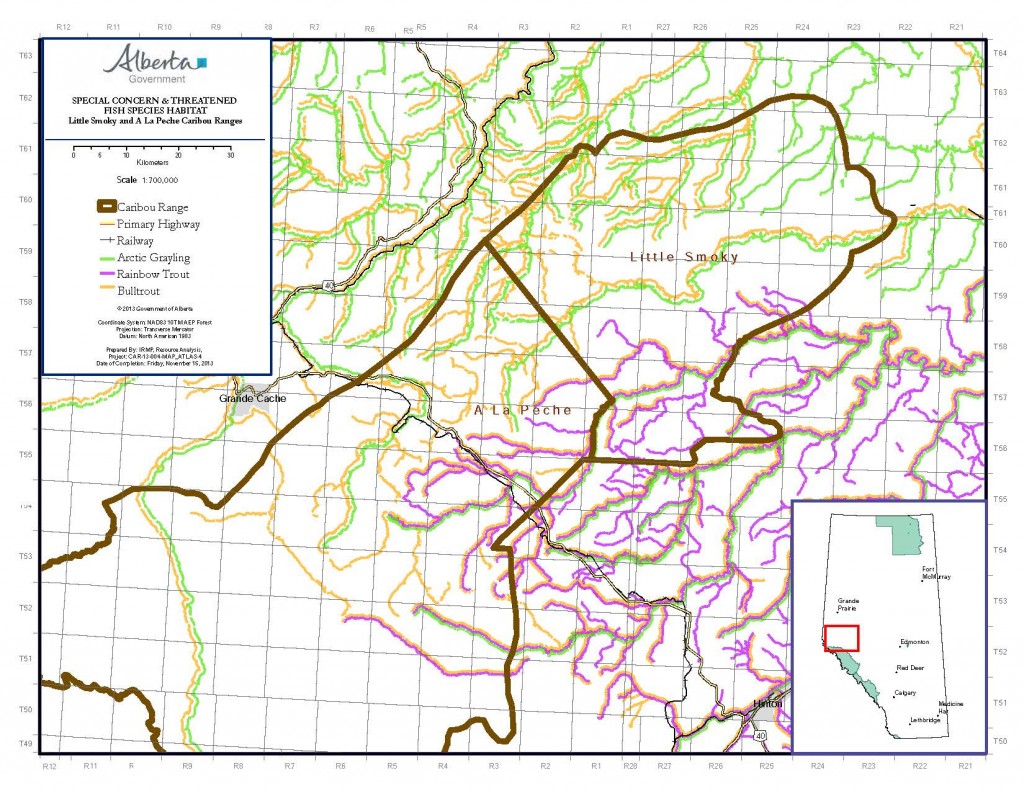