What is Oil Sands Mining?

Although economically important for our province, oil sands mining has severe environmental impacts. These impacts include the destruction of boreal forest habitat, the construction of  tailings ponds to store toxic waste, the release of greenhouse gas emissions, and major landscape transformation. Given these significant impacts, there is growing concern over reclamation liability. In other words, who will end up bearing the clean up costs to return these mine sites to their pre-disturbed state?

To answer this question we examine Alberta’s Mine Financial Security Program (MFSP). Administered by the Alberta Energy Regulator (AER), the MFSP governs reclamation liabilities for Alberta’s oil sands mining industry. The program aims to ensure that mining companies are fully liable for their reclamation costs. This is achieved by requiring companies to provide the AER with financial securities to reclaim their specified area. In the event a company is unable to carry out its reclamation obligations, the government-held financial securities will be used to fund reclamation. Although sound in theory, the MFSP requires major reform. The program contains four key deficiencies. These deficiencies may result in Albertans, not oil sands companies, bearing the cost of reclamation.

The MFSP does not require companies to provide full financial security for the cost of reclaiming land. This is a key deficiency. Instead, the program employs an asset-liability approach to security collection. Under this approach, companies that maintain an asset-liability ratio of greater than three are not required to pay the majority of financial securities until the mine is nearing the end of its life.

The asset-liability approach has generated a significant liability gap. This means the AER only holds financial securities ($939 million) that cover a mere 3.3 percent of the oil sands mining industry’s total calculated reclamation costs ($27.8 billion). As Alberta’s Auditor General reported in 2015, this liability gap poses a risk that Albertans will bear clean up costs in the event a company is unable to carry out its reclamation obligations.

Alarmingly, the liability gap may be larger than these numbers suggest. A Freedom-of-Information-and Privacy (FOIP) request revealed AER documents from a February 2018 private presentation on reclamation liabilities. The presentation documents were published by the National Observer in November 2018 and garnered significant media attention. Robert Wadsworth, AER’s VP of Liability Management, gave the presentation. In it he acknowledged the flawed design of the MFSP and the need for change. His presentation revealed that AER experts estimate the cost of oil sands mining reclamation to be a staggering $130 billion.

The AER swiftly downplayed this number, stating that the estimates were based on a “worst case scenario” in which the oil sands mining industry shuts down overnight. Despite this, the huge discrepancy between the $27.8 billion industry-calculated reclamation costs and the $130 billion AER estimate should not be swept under the rug. The Wadsworth presentation documents did not describe how reclamation estimates came to $130 billion, but this startling number raises serious concerns about the severity of the liability gap.

The asset-liability approach also fails to acknowledge the uncertain future of the oil sands in an increasingly carbon constrained world. Due to its carbon emission intensity, the oil sands may be among the first fossil fuel source to face abandonment. As such, it is increasingly important for the Alberta government to secure the appropriate amount of securities while companies are still financially able. Securing the appropriate amount of securities would require mining companies to provide financial security for the cost of reclaiming currently disturbed land. Doing so will avoid the unacceptable scenario where Alberta taxpayers bear the reclamation costs of bankrupt companies.

The MFSP also faces serious transparency challenges. The transparency issue revolves around the AER’s unwillingness to publicly disclose per-mine reclamation costs. Rather than publishing the reclamation costs associated with individual mines, the AER publishes a single value denoting the entire oil sands mining industry’s reclamation costs. This lack of transparency is even more concerning since mining companies are permitted to estimate their own reclamation costs. The lack of public scrutiny around per-mine reclamation costs, and exactly what factors were accounted for when calculating costs, provides opportunity for companies to underestimate costs and avoid scrutiny over the land outcomes connected to those costs. For example, how much peat wetland and forested areas will be on the reclaimed site compared to pre-disturbance conditions? Canada’s Ecofiscal Commission, a group of policy minded economists, published a report in July 2018 focusing on how to most effectively hold firms liable for environmental impacts and risks. The report acknowledged that requiring external experts to review industry estimated reclamation costs could enhance accuracy and accountability.

As noted in the Alberta Auditor General’s July 2015 report, the MFSP is also plagued by a low auditing frequency. To verify the information submitted by companies, the AER performs in-depth audits on an average of two oil sands mines per year. With a total of nine mines in operation, a rate of two in-depth audits per year raises concerns around the accuracy of the self-reported reclamation costs. Self-reported reclamation cost estimates are problematic as they may conceal an even larger liability gap than currently understood. Correcting this deficiency would require the development of a comprehensive audit schedule with more audits each year. The new audit schedule could be supplemented by a requirement to disclose per-mine reclamation costs (and their associated calculations) to facilitate enhanced accuracy through increased public scrutiny. Although the Auditor General recommended reforming the audit program in 2015, an update in November 2018 indicated the MFSP was not ready for a follow up audit.

Reclaiming tailings ponds is one of the biggest challenges associated with oil sands mining clean up. As of 2018, Alberta’s tailings ponds hold over 1 trillion tonnes of toxic waste from the mining process. A technique known as water capping has been proposed as a possible reclamation method. Water capping involves pumping tailings into empty oil sands mines and capping the tailings with a layer of fresh water to create an artificial lake. Importantly, water capping is an unproven technology and requires decades of testing to confirm its feasibility and effectiveness. Despite the unproven nature of this technology, the MFSP does not require contingency premiums from companies who plan to rely on water capping. If water capping proves unsuccessful, other potentially more expensive technologies may be required to reclaim tailing ponds. Companies will not have provided securities to fund those alternatives. To account for the technological uncertainty of reclamation, the MFSP should require companies relying on water capping to pay contingency premiums. In their July 2018 report, Canada’s Ecofiscal Commission also suggested using contingency premiums to reduce risk in Alberta’s oil sands mining sector. These premiums would help offset the cost of potentially more expensive reclamation technologies in the scenario where water capping is unsuccessful.

Deficiency 4: Inappropriate Extension of Mine Life

Under the current system, oil sands mining companies can modify the area of land covered in their mine approvals. This means that companies can effectively combine multiple mines into a single approval. This is concerning as companies can strategically combine an old mine and a new mine into a single approval to postpone paying financial securities for the older mine. This deferral of security collection extends the period in which the AER lacks securities to fund reclamation. The MFSP also permits companies to enhance their operations by combining their truck and shovel mining with in-situ technology. The in-situ technology increases the amount of recoverable reserves and thus acts to extend the life of the mine. However, the quantity of mineable reserves remains the same. Permitting companies to combine mining and in-situ operations provides a second method in which companies can delay security payment by inappropriately extending the life of the mine. The delay in security payment adds to the already sizeable risk of Albertans bearing reclamation costs. 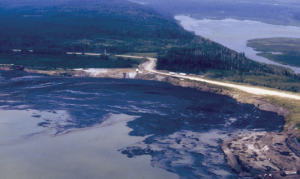 Although the Supreme Court’s recent Redwater ruling reaffirmed the ‘polluter pays’ principle, the existing liability gap still poses a significant risk that Albertans will be left with oil sands mine clean-up costs. PHOTO: © I. URQUHART

The Ecofiscal Commission’s July 2018 report “Responsible Risk” studied financial security policies from across Canada’s mining sector. On February 11, 2019, I interviewed Jason Dion, Lead Researcher at the Ecofiscal Commission, for an added perspective on the research. Dion noted that the scale of the liability gap in Alberta’s oil sands mining industry makes this a pressing policy issue. He stated that Alberta should reform its financial security policy to abandon the flawed asset-liability approach and address the liability gap. For examples of strong financial security policies, Dion recommended looking to either Yukon or Québec.

Under Yukon’s system, mining companies must provide the government with full financial security for the cost of reclaiming currently disturbed land. Although the program is new and untested, the design ensures that the government holds 100 percent of the securities required to fund reclamation. This eliminates the risk that taxpayers will be stuck with the clean-up costs. In our interview, Dion commented favourably on Yukon’s system, acknowledging its clear incentives for companies to reduce risk and progressively reclaim land. Dion noted that reforming Alberta’s financial security system to reflect Yukon’s is a potential path forward.

To lessen the initial financial burden of adopting a full financial security approach, companies could be required to provide 10 percent of the required securities each year over a 10-year period. Securities thereafter would be required to fully cover reclamation costs as they are incurred and would be returned when reclamation is complete. This approach would incentivize companies to progressively reclaim their mine sites, a key practice promoted by the MFSP. In addition to this recommendation, Alberta should also mandate contingency premiums for companies relying on unproven technology, define an auditing schedule to increase accountability, and ensure accessible and transparent per-mine reclamation costs.

The time for change is now. The Government of Alberta needs to reform the MFSP to more effectively protect Albertans from bearing the costs of oil sands mining reclamation. It is vital that the government collect an appropriate amount of financial security while companies are still financially strong. By reforming the MFSP, the government can ensure that reclamation costs are borne by the companies responsible rather than by Alberta taxpayers. As echoed by Dion, arming stakeholders and the public with an understanding of the importance of risk is essential. By increasing public awareness around this serious issue, we can motivate government to push for more meaningful and effective financial security policy in Alberta’s oil sands industry.

Alyssa Anderson is a student in the University of Calgary’s Master of Public Policy program. She loves to play sports, travel to the mountains, and has been an intern at the AWA since September 2018.

The Risk of Catastrophic Mining Disasters

On January 31, 2019 the Supreme Court of Canada issued a decision on the landmark case between Redwater Energy and Grant Thornton Ltd. The case revolved around the bankrupt oil and gas company Redwater Energy Corporation and whether its remaining assets should be used to fund environmental clean-up or settle debts to its secured creditor (ATB Financial). In this landmark ruling, the court decided that Redwater’s remaining assets should be used to fund clean-up of its outstanding reclamation obligations. The judges determined that “bankruptcy is not a licence to ignore rules.” This ruling sets the precedent that future bankrupt oil and gas companies cannot leave their reclamation obligations to the government, and ultimately taxpayers. Thankfully, with this ruling, the polluter pays principle has been reaffirmed in Alberta. But, as noted by Dion in our interview, despite the court’s favourable ruling a significant gap still exists between reclamation costs and upfront security payments in the oil sands mining industry. Dion acknowledged that the Redwater decision avoided making the situation worse but warned that the big picture problem still remains. The remaining assets of a bankrupt oil sands mining company may not be enough to fund the extensive reclamation required of oil sands mines. Unfortunately, the existing liability gap still poses a significant risk that Albertans will be left with clean-up costs.