Alberta Wilderness Association (AWA) recognizes that these first plans for caribou ranges show a major positive shift by Alberta. They set out how the combined impacts of industrial infrastructure, cutblocks, and other human access will be tracked, coordinated and reduced. These actions will eventually regain important intact, connected wetland and older forest areas that caribou require in their home ranges.

On the other hand, AWA is very concerned about significant gaps. First, there must be a much stronger commitment to a process of collaborating with Indigenous communities to support their land-use goals.

Second, it is unclear when minimum caribou habitat goals are met, especially for Cold Lake. Crucial specific targets are lacking in the first 5-10 years and in subsequent decades for maintaining existing good (‘biophysical’) caribou habitat, and reducing overall habitat disturbance. As a result, AWA believes that caribou critical habitat still lacks the effective protection required under the federal Species at Risk Act. It also means that Alberta’s over-reliance on drastic annual wolf culls in the Cold Lake area will continue for far too long, to enable the caribou to survive until their habitat conditions improve.

Third, future wildfire disturbance appears to be ignored in each of these fire-affected sub-regions. This means the plans are unlikely to reach the minimum habitat conditions for self-sustaining caribou outlined in the federal boreal woodland caribou recovery strategy.

“AWA appreciates that the Alberta government convened task forces of stakeholders and rights holders, held public consultations, and has now finished plans. Once enforceable, these plans will greatly advance integrated land management,” says Carolyn Campbell, AWA conservation director. “We look forward to assisting in implementing stronger first decade actions for these plans than what are outlined here, as well as to a completed 2022 Upper Smoky plan and the productive recommendations of other sub-regional task forces.”

“AWA thanks all the participants in this process. We are disappointed there is so little firm commitment to Indigenous land-use priorities, and nothing about an Indigenous Protected and Conserved Area (IPCA) in the Bistcho Lake area,” says Cliff Wallis, AWA Board member. “We will continue to seek strong processes for Alberta to support Indigenous land-use rights and priorities.”

AWA recognizes that the federal government has played an important role in the completion of these caribou plans, via the 2020 caribou conservation agreement that Alberta signed with Ottawa to avoid a federal habitat protection order. AWA asks the federal ECCC Minister to promptly convey his opinion to Canadians about the extent to which Alberta is effectively protecting caribou critical habitat with these plans. 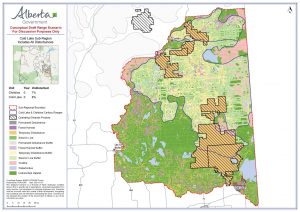 Map 1: Only 8% of the Cold Lake and Christina caribou range area (outlined in blue) is considered undisturbed caribou habitat. Alberta is required within 50-100 years to achieve and maintain a minimum of 65% undisturbed habitat, including both human-caused and wildfire disturbance. Alberta must also maintain enough good quality older forest and wetlands habitat (‘biophysical’ habitat) for caribou life cycle needs while the disturbed habitat recovers. Alberta’s Cold Lake sub-regional plan released April 7, 2022 does not outline by decade or area how this will occur. Map source: Government of Alberta, 2021. 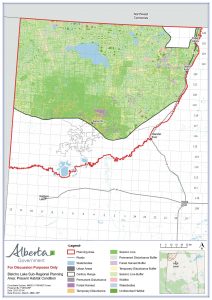 Map 2: Only 6% of the Bistcho caribou range (outlined in black) is considered undisturbed caribou habitat. Alberta is required to achieve and maintain within 50-100 years a minimum of 65% undisturbed habitat, including both human-caused and wildfire disturbance. Alberta must also maintain enough good quality older forest and wetlands habitat (‘biophysical’ habitat) for caribou life cycle needs while the disturbed habitat recovers. Alberta’s Bistcho Lake sub-regional plan released April 7, 2022 does not outline by decade or area how this will occur. Map source: Government of Alberta, 2021.