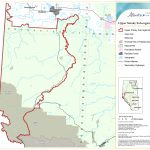 The Upper Smoky sub-region is the focus of one of the three new provincial task forces working to support
“both a working landscape and caribou recovery.” AWA is participating on each task force.

Under the federal government’s 2012 woodland caribou recovery strategy, Alberta should have completed habitat-focused caribou range plans more than two years ago, by October 2017. These plans should have outlined how cumulative human-caused land disturbances in caribou home ranges will be reduced to levels that can support self-sustaining caribou populations. Today, habitat conditions continue to deteriorate and not a single Alberta caribou range plan has yet been finalized.

However, AWA is working hard for the success of the Alberta government’s three caribou sub-regional task forces that started meeting in early November. The sub-regions are Cold Lake, Bistcho Lake, and the so-called ‘Upper Smoky’ region of west central Alberta (see accompanying map). According to the Alberta government’s November 4th news release, the task forces will discuss “a uniquely Albertan solution that will support both a working landscape and caribou recovery.” The task forces’ goals are to: “Advise government regarding the sub-regional planning process to ensure local input is considered in the development of the draft plans; Ensure that sub-regional plans, including caribou range plans, are subject to a comprehensive social, environmental and economic impact assessment; and Review and consider the Draft Provincial Woodland Caribou Range Plan (Dec. 2017) in the context of more holistic sub-regional planning.” Another notable comment in this news release was Alberta Environment and Parks’ Minister Nixon’s statement that he will “work toward solutions that are practical, balanced and grounded in socioeconomic analysis and respect for our land and biodiversity”.

MLAs from each sub-region are chairing these task forces. The ENGO sector is represented by AWA and CPAWS, which each have one representative per task force. Including the Chairs, the three task forces have 45 members in total, including representatives from Indigenous communities, trappers, municipal governments, industry, and motorized recreation. Per the November 4th government news release, the Cold Lake task force recommendations are due March 2020, Bistcho’s are due in summer 2020, and Upper Smoky’s in autumn 2020.

AWA also learned recently that the court hearing for our caribou lawsuit will be December 17th in Edmonton. In January 2019, Ecojustice lawyers, acting on behalf of AWA, Athabasca Chipewyan First Nation, Mikisew Cree First Nation and David Suzuki Foundation, filed a lawsuit against the federal minister of Environment and Climate Change Canada for her failure to recommend protection of the critical habitat of five boreal woodland caribou herds in northeastern Alberta. The hearing is open to the public.