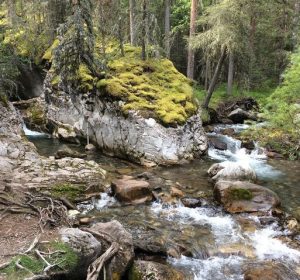 Fortress ski hill proposes to withdraw 50 million litres of water per year that would otherwise flow into Kananaskis’ Galatea Creek. The water would be trucked downstream and sold for its ‘purity.’ PHOTO: © C. CAMPBELL.

Fortress Mountain ski hill is proposing to remove 50 million litres per year of water flowing into Kananaskis’ Galatea Creek and truck it downstream to a Calgary bottling facility. Many AWA members and other concerned Albertans have stated they strongly oppose this water use proposal.

The 1968 water license allows Fortress to remove annually 98.678 million litres for its ski hill operations. Fortress now indicates it will not use 50 million litres per year of that total. It proposes to sell that unused portion. Trucks will take this water, branded for its ‘purity’, to be bottled or canned and then sold. Every year thousands of truckloads of water will be taken from Kananaskis and bottled for consumers in Calgary.

Alberta Environment and Parks confirmed to the Rocky Mountain Outlook newspaper in July 2019 that Fortress’ application was to truck the water to a bottling facility in Calgary. Fortress’ management has not stated a definite destination or product format. The statement of  oncern that AWA submitted to regulators and elected decision makers is based on this intent – one that obviously wasn’t considered when Fortress applied for its 1968 license.

Fortress has stated that it opposes single use plastic bottles. However, Fortress’ managing director Tom Heath also stated to a CBC reporter in July 2019: “We’re looking to sell the water. What the buyer wants to do with us, it could be, God only knows, it could be bottled water, but we won’t have anything to do with it. Think of us like an oil well. We are not a gas station.”

Although this water will be marketed for its ‘purity’ the scheme actually is environmentally damaging. Its higher impacts include:

• removing water from a small mountain stream flowing into a protected area in the Bow River basin headwaters;
• greenhouse gas emissions to pump and transport thousands of truckloads per year of water that is already flowing naturally to Calgary; and
• helping to promote bottled/canned water as ‘purer’ than the high quality municipal drinking water Calgarians currently enjoy. We need to greatly reduce our overall packaging and waste, not increase it.

Most of the flows of the Bow and other major Alberta rivers comes from mountain ‘headwaters’ lands and the snow, rain, and melting glacier water they provide. During high flows, channels are formed and flushed, nutrients and sediment are transported downstream, riparian areas are changed and renewed. A portion of runoff and channel flows are absorbed into the ground to emerge later as the essential yearround ‘base flows’ to our rivers. During low flow periods, aquatic life can be limited by water scarcity. Mountain ecosystems are also especially vulnerable to the uncertainties posed by climate change. Considering these factors, water that is not needed for its approved purpose should remain in waterways in Kananaskis; extracting it, truckingit, selling it…those are the last things that should happen to this water.

While 50 million litres per year is not a large portion of the flow in the Bow River watershed, this scheme proposes to establish a very troubling precedent. Our water resources are limited and AWA strongly opposes this poor re-allocation option. In the 50 years since the Fortress water license was issued, much has changed. Substantial risks, not appreciated in the 1960s, now surround the future of water in the Bow River basin:

• the Bow River basin is now closed to new surface water licenses – regardless of how small – because of over-allocation concerns, both for aquatic ecosystems and prior rights holders.
• even without factoring in climate change, there is now strong scientific evidence that pre-20th century droughts in the Bow River basin were much more severe than the flow levels experienced in the 20th century. The flows in the last century were used to guide the amount of water issued in Bow River basin water licenses;
• there are even greater risks of severe droughts in the Bow with the predicted disappearance of most Rocky Mountain glaciers by 2100, and with other future climate-change affected flow risks;

Fortress’ license was issued in 1968 for a particular use, timing, and location. Managing the cumulative impacts to our water resources for future generations and the health of aquatic ecosystems requires responsible allocation decisions of Bow waters, no matter how large or small the license. Fortress ski hill should have the highest water conservation practices possible given its privileged position surrounded by Alberta mountain parks. In AWA’s view, this proposal – so contrary to the purposes of the initial license – demands that the water should be left where it belongs, in the mountain stream.

In an August 22 opinion column in Banff’s Crag and Canyon, climber Brandon Pullan writes: “I was stoked for Fortress Mountain
ski resort to open, but if they start selling water to bottling companies, I’ll be skiing elsewhere.” From the letters to Alberta Environment and Parks Minister Nixon, MLAs, regulatory officials and Fortress that AWA was copied on, we know that many Albertans likewise strongly oppose Fortress’ water use proposal.