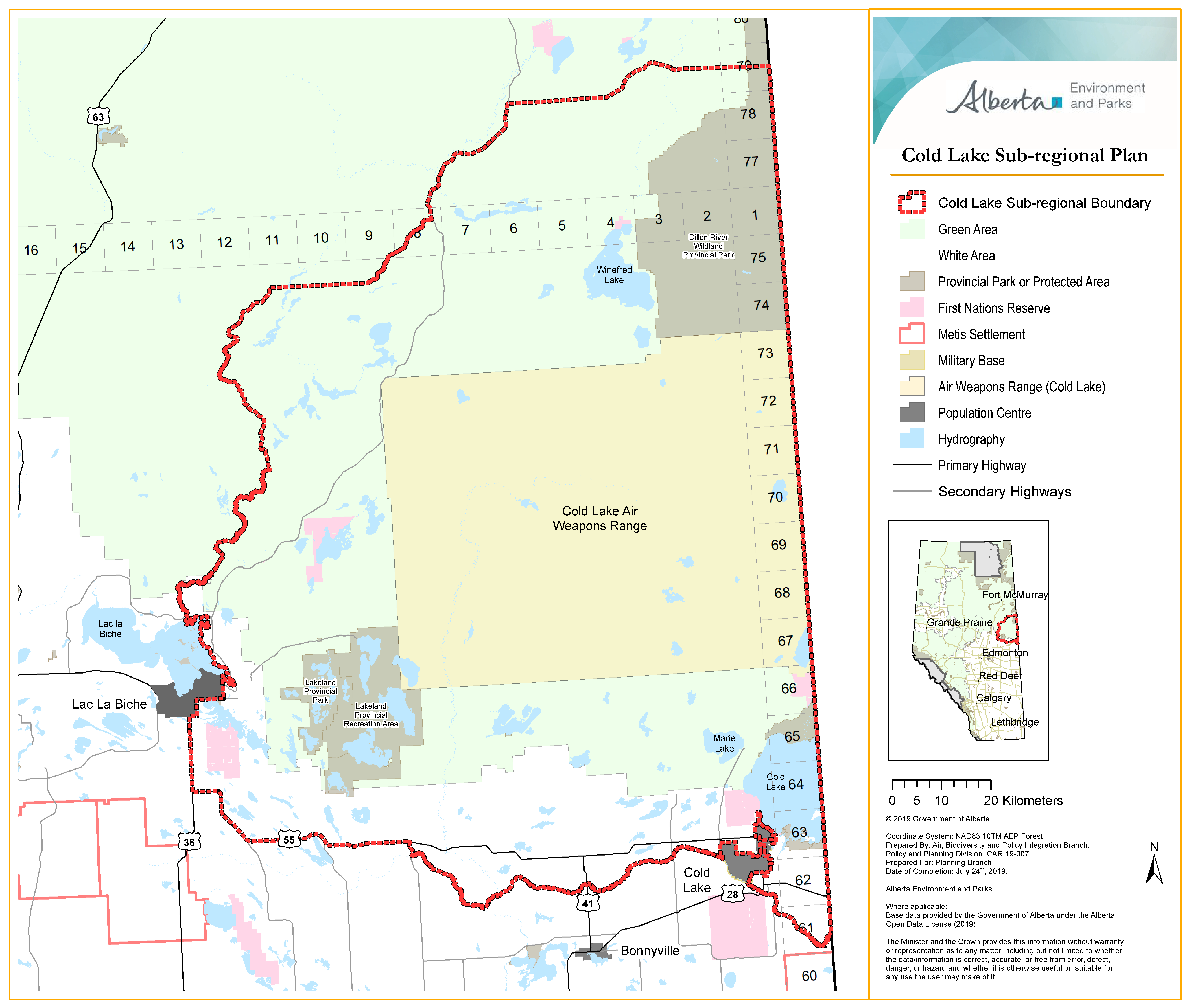 The Cold Lake sub-region is an area where one of three newly struck provincial task forces will focus on for woodland caribou recovery measures. AWA will participate on each task force. Map © Government of Alberta.

August 2019 brought several new planning proposals for Alberta’s threatened woodland caribou. The most far-reaching, potentially, was a draft ‘conservation agreement’ between the federal and Alberta governments. It contains timelines and actions for Alberta to follow as it develops range plans to meet at least the minimum habitat requirements for woodland caribou. AWA welcomed the start of the public comment period for the draft. The provincial consultation lasts until October 6, 2019. To participate, visit this website: https://talkaep.alberta.ca/caribou-conservation-agreement.

Under the federal government’s 2012 woodland caribou recovery strategy, Alberta should have completed habitat-focused caribou range plans by 2017. These plans should have outlined how cumulative human- caused land disturbances in caribou home ranges will be reduced to levels that can support self-sustaining caribou populations. In 2019, not a single Alberta caribou range plan has yet been finalized. Since habitat conditions continue to deteriorate it’s vital to act as soon as possible. There literally is no time to lose.

The draft Canada-Alberta agreement has many positive aspirations. For example, it proposes that range plans have legal standing; they should be established under provincial law. Also, Indigenous collaboration is acknowledged as important for caribou conservation. Other positive proposals are:

• to develop forest management plans that would set harvest levels that support caribou recovery, including the phase-out of mountain pine beetle surge clearcuts;
• to develop energy infrastructure and access plans so as to maintain and restore habitat; and
• that energy and forestry approvals would include conditions to reduce cumulative effects to caribou habitat.

It would be a great step forward if legally binding plans with these habitat measures were completed. More species than caribou would benefit if these intentions are realized on the landscape. Alberta’s threatened native fish and other wildlife rely on intact or older forests and also would benefit greatly from long-overdue cumulative effects management in caribou ranges. However, history suggests that too many promising proposals end up in the graveyard of good intentions. There is no certainty that these measures will be implemented as described and in a way that adequately protects caribou critical habitat. There are troubling gaps in the draft Canada-Alberta agreement. Some of the most serious ones are:

• it lacks interim habitat protection during the time that range plan discussions and planning are proposed to occur, making it likely that habitat disturbance will continue to grow;
• the timeline for implementing most of these measures is still years away and there is no mechanism of accountability if these timelines are missed;
• it lacks a funding commitment; and
• it omits a target decade by which Alberta will achieve and maintain at least the minimum habitat requirements for self-sustaining caribou.

In the past, encouraging sounding Alberta caribou declarations have not led to meaningful habitat actions. Despite the Alberta government’s approval of the 2005 Woodland Caribou Recovery Plan and 2011 Caribou Policy, extensive forest fragmentation and habitat loss marches along. Alberta continues to put too many eggs in the wildlife manipulation basket. This emphasis delivers horrific mass wolf culls in several ranges and a pilot project to fence calving females in enclosures, all of which risk being expensive distractions from necessary habitat actions.

A second recently released planning document is a draft conservation agreement negotiated between the federal government and
the Cold Lake First Nations. AWA applauds this agreement. It is an important step to enhance Cold Lake First Nations’ capacity and leadership to recover woodland caribou within its traditional territory in northeast Alberta and northwest Saskatchewan.

The agreement’s “Shared Recovery Objective” is laudable: “to set out and confirm the actions that the Parties have agreed to take in order to support the achievement of a self-sustaining population in the Cold Lake Boreal Caribou Range, consistent with the
population and distribution objectives in the [federal boreal woodland caribou] Recovery Strategy, that will support traditional Indigenous harvesting activities, consistent with existing Indigenous Rights”.

The agreement includes a timetable for cooperation and investigation of a number of positive measures over the next several years, including habitat restoration and conservation. A hitch may be that, with the range entirely situated on provincial lands, progress will ultimately depend on the Alberta government’s willingness to advance the habitat and stewardship goals.

Alberta took a third notable initiative. It is launching three caribou sub-regional task forces this fall to recommend caribou recovery actions. One task force will be focused on the Cold Lake region, which should build on the momentum generated by both the Canada-Cold Lake First Nations agreement and the useful habitat restoration work piloted by some oil sands companies in that
region. The two other sub-regions are the northwest Alberta Bistcho region, and the socalled ‘Upper Smoky’ region of west central Alberta. The Upper Smoky includes ranges of the Redrock-Prairie Creek and Narraway mountain caribou, which federal Environment Minister McKenna determined in May 2018 are facing imminent threats such that immediate intervention was required to enable their eventual recovery.

Each task force will consist of 12 to 16 members; each will include representatives from indigenous communities, municipalities, industries, recreation groups, trappers and environmental NGOs. Task forces will consider regional economic, access, and habitat scenarios and recommend land use approaches. AWA will have one delegate on each task force; we see this as an important opportunity to contribute. We will urge our fellow members to endorse land management solutions that will achieve and maintain habitat requirements for self-sustaining caribou in a reasonable time horizon while supporting environmentally sustainable economies.

The Cold Lake task force is intended to move fast: it will start meeting in September and will make its recommendations in November 2019. The Alberta government has stated it will then draft a Cold Lake sub-regional land use plan for caribou recovery by the end of 2019. Public and Indigenous consultations will then be conducted on that draft plan.

It is positive that these task forces, which are listed as an action in the draft Canada-Alberta conservation agreement, are getting underway. Time will tell whether these processes work. We hope these two conservation agreements, when finalized, actually will make meaningful progress towards securing habitat for self-sustaining wild caribou in healthy forests.