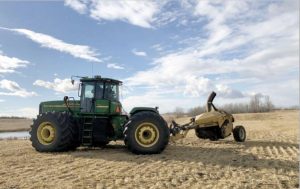 Wetlands are Alberta’s most complex and diverse ecosystems, covering approximately 20 percent of Alberta’s landscape. Wetlands are valued for serving essential ecological and societal functions that include maintaining water supply and supporting native biota. However, wetlands had historically been viewed as a hindrance to Alberta’s settled areas in development, industry, and infrastructure. As a result, drastic wetland losses have occurred in Alberta due to this general lack of awareness regarding the aforementioned environmental benefits wetlands offer.

Society’s attitude has shifted with new scientific knowledge, and federal/provincial funds and programs have helped to ensure land improvements for wetlands. With new awareness in Alberta came a new provincial wetland policy in 2013 (Alberta Environment and Sustainable Resource Development) aimed at balancing resource development with wetland preservation. However, several criticisms of the new policy have been raised due to challenges in management of wetland improvements in Alberta’s settled areas (known as the White Area). Understanding wetland significance and exposing the gaps in the wetland policy is therefore essential to avoid short-sighted land-use decisions in Alberta’s White Area.

Wetland Value and Loss in the White Area
Mineral wetlands (marshes, swamps, and shallow open water) are the primary category of wetlands that are currently present in Alberta’s White Area. The White Area covers 39 percent of Alberta’s southern landscape and constitutes privately owned land for settlement and agriculture. Most of Alberta’s White Area is situated in the Prairie Pothole Region (PPR) where centuries of glacial retreat and scouring left millions of isolated “potholes” (now inhabited by shallow open water wetlands).

Mineral wetlands in the PPR serve a variety of ecosystem services including removal of excessive nutrients from agricultural practices, water treatment cost reduction, water storage during high precipitation, and gradual water supply to other habitats downstream. Wetlands also provide nesting grounds for nearly eight million waterfowl and 20 million shorebirds while concurrently hosting spawning areas for fish and
sustaining more than 20 rare plant species. PPR wetlands can be utilized for humanitarian purposes such as recreation, education, and cultural significance to many Indigenous groups. And from an economic perspective, every dollar spent on wetland retention yields about $7.70 in wetland ecosystem services, such as flood control.

If wetlands are lost or disturbed, they can experience altered hydrology, increased nutrient and pollution runoff, increased risk of introduced species, and enhanced habitat fragmentation. Thus, while it may seem lucrative to impact a wetland for short-term benefits, there are incentives to preserve wetlands to achieve long-term benefits.

Due to wetland destruction throughout the 20th century, nearly 64 percent of wetlands in Alberta’s settled areas no longer exist. In the White Area specifically, rapid urban sprawl is one cause of wetland destruction. This rapid expansion has created wetland losses as high as 90 percent in Calgary and 80 percent in Edmonton. Agricultural practices such as tilling, draining, and ploughing were all practices intended
to expand the productive agricultural land base. But, as Locky showed in a 2011 study, these activities on private lands have resulted in nearly 40 to 60 percent wetland loss and ecosystem damage. A wetland policy that carries authority and reaches different sectors within Alberta is therefore fundamental to prevent further wetland loss in settled areas and preserve wetland value.

Alberta’s Wetland Policy
The long-awaited release of the “Alberta Wetland Policy” occurred in 2013 and succeeded the Interim Policy “Wetland Management in the Settled Area of Alberta” released in 1993. The policy came into full effect in the White Area on June 1, 2015 and on July 4, 2016 in the Green Area. The policy was developed to complement Alberta’s water sustainability strategy “Water for Life.” That strategy aims to create a “healthy and sustainable water supply for the environment, for our communities, and for our economic well-being.”

The policy is aimed at conserving and restoring wetlands in areas that have experienced high losses while still allowing for growth and development. It manages wetlands by avoiding, minimizing, and (if required), replacing lost wetland value. Wetlands are evaluated and assigned a relative wetland value (Figure 2), where highly valued wetlands are prioritized for preservation. But the success of this policy will, however, be highly dependent on proper implementation and any loopholes presented. 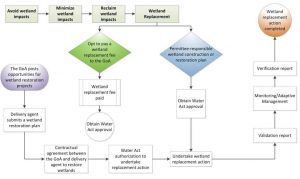 Figure 2: An overview of wetland replacement options available under the December 1, 2018 update to the “Alberta Wetland Policy.” Note: “wetland restoration agent” status and responsibilities are equivalent to a “delivery agent” described in this figure. CREDIT: GOVERNMENT OF ALBERTA

Is Avoidance Working?
One major criticism of the policy is that it fails in its responsibility to encourage proponents to avoid impacts on wetlands, where managing development seems to be a higher priority that wetland protection. The current policy seems to leave few barriers to obstruct development on wetlands. A proponent needs to provide evidence for how they have attempted to avoid and minimize the loss of wetland area and value. If this evidence is provided, this leaves little obstructions for a Water Act approval to be denied. Creating financially impractical wetland replacement fees is an approach that has been undertaken by the City of Calgary through private compensation banking. However, many developers were unimpeded and paid the high fees for actual land values at $450,000/ha. By comparison, the current policy has wetland replacement fees at upwards of $19,400/ha for Class D wetlands in the White Area. Creating more awareness around wetland importance and value needs to be spread throughout government, industries, and communities to empower local action for wetland avoidance in a province that has encountered so much loss.

Despite this, it is difficult to say that avoidance isn’t working in Alberta’s White Area because there is no requirement for proponents or regulators to report on avoidance measures. Companies make internal decisions regularly around avoidance, and this inability to quantify avoidance and mitigation steps is damaging to policy success. If the policy doesn’t have a framework to document wetland avoidance, it’s difficult to determine whether wetland avoidance is successful. Having stronger avoidance mechanisms and a framework to document avoidance is imperative for evaluating if the “Alberta Wetland Policy” is fulfilling its goals.

Looking Back on Wetland Compensation
One replacement method that has struggled to succeed in the White Area is the concept of compensation banking. In 2004, The City of Calgary became a wetland restoration agent in Alberta and applied this method to discourage approval holders from disturbing wetlands. Compensation and restoration was to be a last resort if avoidance and minimization weren’t feasible. Funds paid into the program were supposed to be allocated towards restoring wetlands in Calgary’s watersheds.

The Auditor General reported in 2015 that nearly $25 million was collected from proponents but no wetlands were ever put back on the landscape. A final report released in 2019 (Fiera Biological Consulting) revealed that there were few opportunities for wetland restoration in the municipal area, due to a basin closure order for the Bow, Oldman, and South Saskatchewan River basins in 2006. This prevented The
City of Calgary from obtaining water licences necessary for restoration work since most of their projects relied on municipal treated stormwater. Complications were faced when The City of Calgary attempted to perform restoration work outside the city limits, and both of these challenges led to a gradual accumulation of compensation funds. This emphasizes the need for stronger avoidance mechanisms especially in the current policy where the wetland replacement fees are much lower. The experiences from the City of Calgary also reinforce that adequate capability and resources, and geographic flexibility in accessing restoration opportunities needs to be implemented within the “Alberta Wetland Policy” to achieve its primary outcomes.

But, the experiences from The City of Calgary as a wetland restoration agent must be considered when moving forward with this initiative. A report was released by Fiera Biological Consulting in 2019 that reviewed The City of Calgary and The County of Vermilion River’s experiences in municipal-provincial wetland management. This report claimed that clear expectations, proper communication, capacity and resources, and regulatory harmony are paramount to ensuring that municipalities succeed as wetland restoration agents under the “Alberta Wetland Policy”. Recognizing this shortfall in wetland replacement is a reason for some optimism but only time will tell if the new update will fulfill all its proposed benefits.

The Policy Needs to Advocate for Alberta’s Producers
Another area of improvement necessary for the wetland policy is for the government to create a straightforward means for Alberta’s producers/landowners to improve their wetland stewardship. One of the issues identified in a 2017 Alberta NAWMP Partnership report was a general lack of awareness and clarity about the wetland policy among Alberta’s producers. Confusion arises among landowners about what differentiates a wetland from a “low spot” and what kind of activities on their land is governed by wetland legislation. Education provided by the provincial government aimed towards producers (e.g. fact sheets, bringing in policy speakers) and improving communication between landowners and the province are good starting points. This is vital since the wetland policy in the White Area will not accomplish its goals without positive contributions from Alberta’s producers/landowners. The government must help to improve public awareness.

Alberta also needs to better acquaint landowners with the benefits of retaining and restoring wetlands and increase financial support programs. Promoting financial programs for landowners to undertake wetland restorations would incentivize landowners. Organizations such as DUC have several programs that financially compensate landowners for voluntary wetland restoration. Alternative Land-Use Services (ALUS) is a non-profit organization that also provides financial compensation for landowners for wetland retention and restoration
(ALUS 2019). As all replacement fees are now channeled directly to the provincial government, more funds may be available to complete these projects and thereby allowing for producers to continue to be stewards of their land.

Conclusion
Creating more awareness for wetland avoidance, having adequate capacity and resources for wetland replacement, and creating more awareness about the “Alberta Wetland Policy” among producers can improve wetland management. Although there has been some reformation for centralizing wetland replacement funds, the wetland restoration program is still developing. Until this is completed, the knowledge of what we have lost in the White Area hangs over our heads and emphasizes the value of what needs to be preserved.

Acknowledgements
Special recognition is owed to Jay White for his guidance on Alberta’s wetland policy in the White Area and support in writing this piece. I’d also like to acknowledge Ducks Unlimited Canada for their contributions to this article.