In mid-May, the Alberta government established four large new wildland provincial parks and expanded an existing wildland provincial park in northeast Alberta. Three of the parks, plus the expansion area, were already approved under Alberta’s Lower Athabasca Regional Plan (LARP) of 2012. They had been managed as wildland parks since that time. Still, this announcement should be applauded since it means these areas now have full legal protected area designation.

The fourth new wildland provincial park is Birch River, which the 2012 LARP had identified as a Public Land Use Zone (PLUZ) with commercial forestry. However, through a March 2018 agreement the Tallcree First Nation gave up its forestry rights so that Birch River could become a wildland park. Wildland parks place higher priority on ecological values than PLUZs. The Alberta government, Syncrude, and the Nature Conservancy of Canada (NCC) facilitated this arrangement. Syncrude contributed $2.3 million to the Nature Conservancy and NCC made a payment for the Tallcree’s timber quota. (Syncrude’s payments will give it offset credits for some of its oil sands mining disturbances.)

The Alberta government and Tallcree First Nation agreed to cooperatively manage Birch River for economic opportunities compatible with conservation. Alberta has committed to cooperative management with nearby First Nations for all these parks. AWA believes this is an important advance in regional planning.

Significant areas of the Red Earth and Richardson boreal woodland caribou ranges will be protected in these parks. The East Side Athabasca River and Cold Lake caribou populations have relatively smaller new areas of their ranges protected (about seven and five percent respectively). But the parks could still help protect the populations using those areas. However, the protection potential delivered by these new parks needs to be complemented by other measures. Good habitat restoration and access/infrastructure disturbance limits still will be needed to enable caribou to recover in their home ranges within and outside of these new protected areas.

Between 2012 and 2016, $45 million in oil sands and metallic minerals leases were repurchased by Alberta in these lands. Some petroleum and natural gas leases remain and are a permitted activity, though no new leases with surface access will be sold there. The new parks also allow grazing as a potential permitted activity; even though grazing requests must satisfy a suitability assessment, this is a concerning precedent for boreal wildland parks.

AWA was disappointed to note that the Gipsy-Gordon Wildland Provincial Park, another park approved in the 2012 LARP, was not created at this time. We will continue to seek protection for its diverse forest communities along and south of the Clearwater River.

Here is a brief introduction to Alberta’s newest parks (Figure 1).

Kazan Wildland Provincial Park (5700 km2): protects a large portion of Alberta’s Canadian Shield natural region, including about half of the east bank of the Slave River (the west bank is mostly protected already by Wood Buffalo National Park). Together with two smaller wildland parks created in 1998, Kazan protects most of AWA’s Wylie Lake and Charles-Cornwall Areas of Concern. Lakes cover about 12 percent of the landscape of these new protected areas. 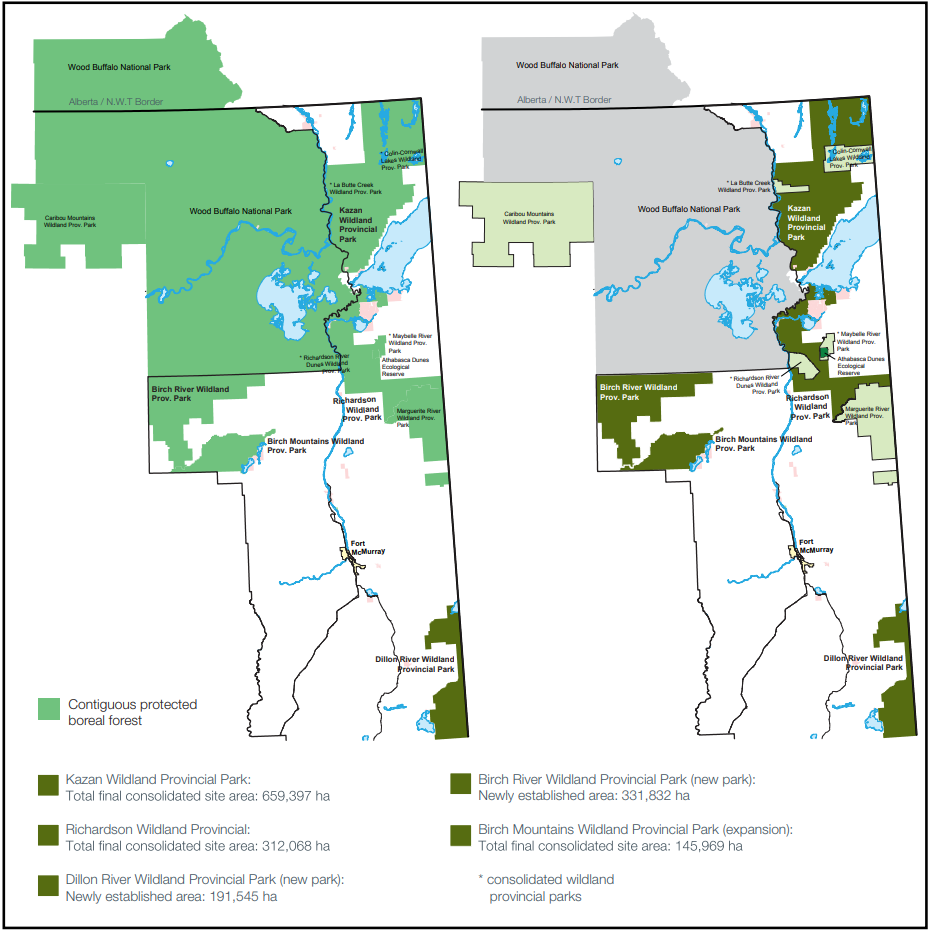