Alberta Wilderness Association (AWA) has found that no new energy rights within Alberta caribou ranges are scheduled for future sales. Two in-range licences covering 24 km2, which had been posted for the August 19 rights auction, have since been withdrawn by Alberta Energy. AWA recognizes the importance of these lease sale withdrawals and urges the Alberta government to defer all new energy leasing within caribou ranges, until strong habitat-recovery range plans are in place to ensure survival of Alberta’s endangered caribou.

“AWA welcomes the pause in energy leasing inside caribou ranges and the Alberta government’s withdrawal of two in-range licenses slated for sale in August,” says Carolyn Campbell, AWA conservation specialist.  “This is a golden opportunity for the Alberta government to reduce a main driver of caribou habitat destruction, by committing to defer all new in-range energy rights sales until strong caribou range plans that are required under federal law are in place.”

About 740 km2 of new oil and gas licences and leases within Alberta caribou ranges have been auctioned since the Notley government was sworn in on May 24, 2015. Most of that (550 km2) was posted before the election, although a sizeable area (180 km2) was auctioned on July 22. A formal deferral of new energy rights sales within two ranges (the Little Smoky and A La Peche, in west central Alberta) has been in place since May 2013. In early March 2015, the Alberta government withdrew 212 km2 of planned sales in endangered mountain caribou range after AWA, other conservation groups and citizens voiced strong concerns.

Caribou habitat solutions are within reach. It is possible for energy companies to aggregate and greatly reduce their surface footprint while extracting resources: Alberta could place total surface disturbance limits within ranges, and could provide companies alternatives to prove tenure, to encourage longer-distance directional drilling and pooling of leases. Alberta could also require forestry companies to share fibre quotas outside ranges to fairly share the burden of ending in-range logging, and could require extensive reforestation crews financed by energy companies to cushion impacts to municipalities.

Energy and forestry footprint in caribou ranges stimulates deer, moose, and predator populations, robbing the caribou of their ability to minimize overlap with predators. Provincial scientists assessed Alberta woodland caribou as ‘endangered’ in 2010, though the province has not yet updated their listing from ‘threatened’. Caribou recovery is both technically and biologically feasible, according to scientists. 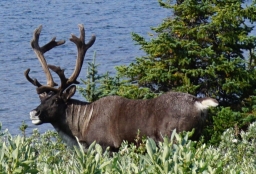