David Anderson, Member of Parliament for Cypress Hills-Grasslands, on behalf of the Honourable Leona Aglukkaq, Minister of the Environment, announced on July 29, 2015 that the Govenlock Community Pasture will be transferred from Agriculture and Agri-Food Canada (AAFC) to Environment Canada, conserving this grassland ecosystem and habitat for species at risk.

Alberta Wilderness Association (AWA) commends the Government of Canada for this significant step forward. Conservation groups, including Alberta Wilderness Association, have been calling for Govenlock to be established as a National Wildlife Area and for other important pastures to be retained under federal control. “Key pastures must be designated as National Wildlife Areas to ensure their protection. At the same time, livestock grazing needs to continue as a management tool in order to sustain a full range of biodiversity on these grasslands” said Cliff Wallis, an AWA director who works on grassland issues. “Ranchers who use the Govenlock PFRA Pasture are important to its ongoing conservation and the stewardship of more than a dozen federally listed species at risk.”

The withdrawal of AAFC would leave numerous livestock producer patrons as well as numerous endemic grassland wildlife species with an uncertain future without the important decision announced this week. AWA supports the transfer of management of the Govenlock Pasture to Environment Canada and designation as a National Wildlife Area (NWA) as a solution for both conservation and livestock producers. Environment Canada will manage the pastures with conservation as a priority and will accommodate existing pasture patrons by including grazing as part of the management protocol.

In April 2012, the Government of Canada announced the divestiture of PFRA community pastures – strongholds for many of Canada’s prairie species at risk including the greater sage-grouse. Only one of the community pastures is federal land – Govenlock PFRA Pasture. It is more than 200 km² and is part of an Important Bird Area (IBA) containing critical habitat for greater sage-grouse.

In March 2013, AWA asked the Government of Canada to make the Govenlock Community Pasture a National Wildlife Area under the management of Environment Canada. This request has been a priority of the Northern Plains Conservation Network (NPCN) for the last two years under its Sage-grouse/Grassland Bird Initiative, to protect priority grassland areas in Canada in the area known as the “Forgotten Corners” in SE Alberta and SW Saskatchewan (see map below).

PFRA pastures were created during the 1930s to restore and protect grasslands and stabilize local economies. The PFRA community pastures are part of some of the largest contiguous tracts of native grassland habitat remaining on the Northern Great Plains. While under federal control, PFRA community pastures are bound by the Species at Risk Act. Saskatchewan does not have its own species at risk legislation and has been criticized by conservation groups for not taking action to protect species at risk on provincial public lands.

Govenlock PFRA Pasture is located near the Montana-Alberta border in the Forgotten Corners: 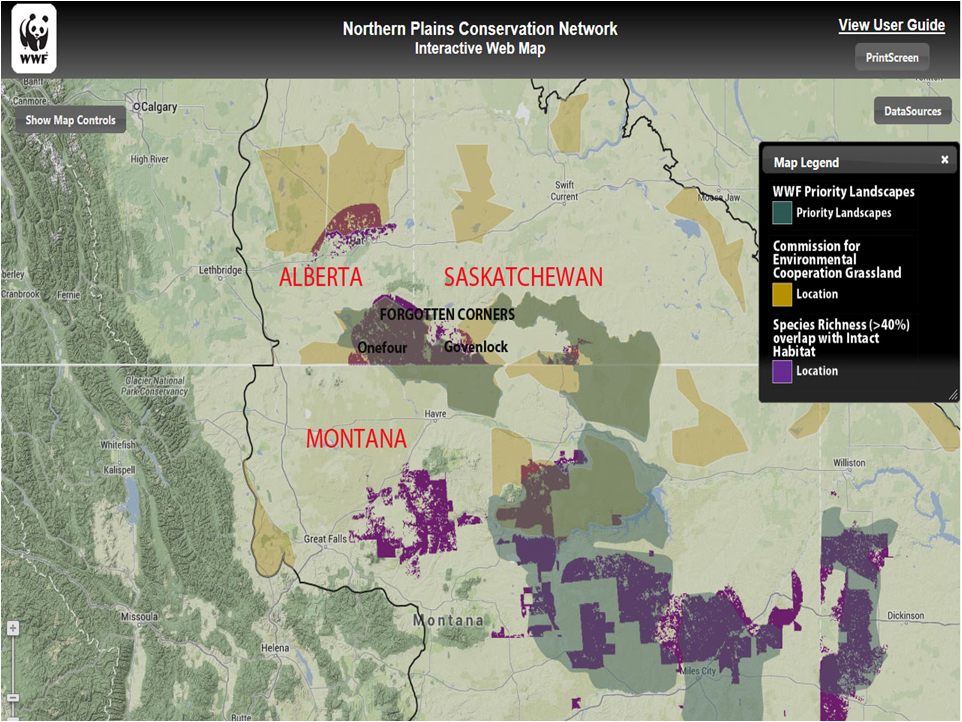