Alberta Wilderness Association (AWA) is greatly encouraged by today’s announcement by the Alberta government that 23 new environmental enforcement positions are being established to patrol Alberta’s Eastern Slopes and other backcountry areas. The hirings follow several years of sparse presence on the ground by officers and widespread damage to streams and river beds in Alberta’s headwaters.

“This is great news,” says Sean Nichols, Conservation Specialist with AWA. “We are hopeful that this will be a deterrent to irresponsible off-highway vehicle use that is degrading the sensitive wetlands and streams crucial for our abundant, clean water supply.” AWA has repeatedly called on the province to step up enforcement to reduce harmful recreation impacts on public lands.

Findings from AWA’s 11-year ongoing recreational trail monitoring project in the Bighorn Wildland west of Rocky Mountain House indicate that Alberta’s growing population and affluence have resulted in ever-increasing numbers of off-highway vehicle (OHV) users in the backcountry areas of the Eastern Slopes. For many of these new OHV users, a lack of awareness and education can lead to damage done through ignorance. However there are also users that knowingly and willingly perform activities that damage riverbanks and threatened fish habitat, and that cause erosion and siltation into creeks and rivers. Recent initiatives by the RCMP and provincial judges in communities along the Eastern Slopes have led to an increase in the frequency and magnitude of fines and charges laid against these offenders, when caught.

Both a wider public awareness of harmful impacts and the potential for penalties, plus actual follow-through on their assessment, are needed to combat the environmental damage being done. Alberta Environment and Sustainable Resource Development (AESRD) has informed AWA that the new positions will be staffed by their conservation officers and seasonal park rangers, and will cover Alberta’s “green zone” public lands over the summer. The new personnel will focus on education, as well as the much-needed enforcement angle. AWA strongly applauds AESRD for this project and hopes to see it continued past the end of the summer. 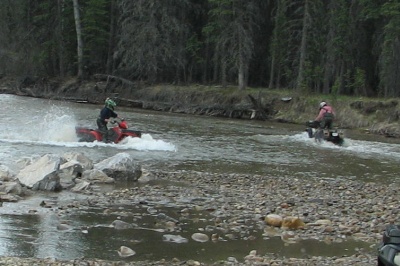