Positive Developments in the Fight Against OHV Offenders

Life got a little bit riskier for off-highway vehicle (OHV) offenders along Alberta’s Eastern Slopes this spring after a couple of developments on the enforcement front. In a March ruling, a judge in Rocky Mountain House assessed two $1,500 fines against OHV users joyriding in the Clearwater River. This is the highest fine ever levied for this charge in Alberta’s history. As reported in Rocky Mountain House’s The Mountaineer newspaper, the judge in the case expressed disappointment at “the lack of respect the OHV users in [Rocky Mountain House] have for the local environment and wildlife.” It was encouraging to see the decision offer judicial recognition to the value of Alberta’s headwaters regions and the damage irresponsible OHV use may cause. 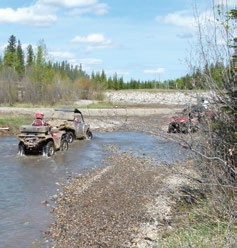