Once widespread across the prairies, the greater sage-grouse was designated as an endangered species by the Species At Risk Act (SARA) in 1998.  Degradation and fragmentation of habitat and human disturbance (mainly industry) contributed to a greater than 90 percent decline of the species in Alberta and Saskatchewan since the late 1960s. Failed recovery efforts led to an Emergency Protection Order (EPO) that was put into place in December 2013. The protection order applies to specific critical habitat for greater sage-grouse on public land.

AWA has been busy since the EPO was put into place. AWA has focussed on working with the ranching community to create awareness and to help with the recovery effort for sage-grouse. We have been fortunate to partner with the Heydlauff family (one of the few ranches in southeastern Alberta where sage-grouse are still present) and are working with them to document the ecological history of their ranch. 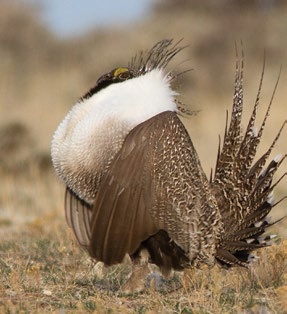