Alberta has posted 9 square kilometers (896 hectares) of new oil and gas rights in Redrock-Prairie Creek for auction on April 29. In the adjacent Narraway caribou range, it plans to auction 256 hectares on April 8 and another 256 hectares on May 13. The new leases will encourage more new seismic lines, well sites and roads and make survival chances even worse for these caribou.

ACA’s 2012 proposal, by contrast, envisions continued long-term timber harvest deferral, with compensation for the affected leaseholder, plus rules for oil, gas, and coal development that would greatly reduce surface disturbance, compatible with caribou recovery. “With a new Premier and changes in the ministers responsible for public lands and energy, we wanted to ensure this promising conservation approach is back on the government radar,” says Campbell.

Excessive human disturbance within caribou range stimulates populations of deer, moose and the wolves that prey on them. Predators have easier access to caribou in fragmented forests and wetlands, resulting in higher predation than caribou can tolerate. The Redrock-Prairie Creek population is estimated to have declined from 212 animals in 2009 to 127 in 2012, a 40% decline. This population was rated as ‘Stable’ in 2004 when Alberta’s ineffective 10 year caribou recovery plan was put in place. Alberta’s wolf cull in the Little Smoky caribou range east of Redrock-Prairie Creek, while habitat destruction from industrial activities continues to expand, has attracted widespread criticism. 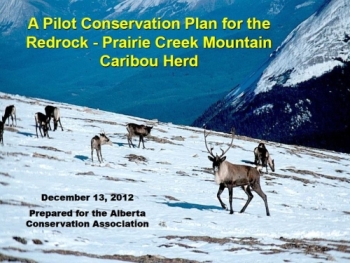