The Alberta government’s decision to postpone a large batch of oil and gas rights sales in the Redrock-Prairie Creek mountain woodland caribou range is positive. It is urgent for the government to do more. Further mineral rights auctions should be deferred in Redrock-Prairie Creek and adjacent Narraway mountain caribou ranges until range plans are in place. In addition, the government should issue strong, habitat recovery-focused range plans for all four west central caribou populations in spring 2015, as they are adjacent, involve similar industry operators and face similar issues.

The Alberta government committed in its 2011 woodland caribou policy to achieve naturally sustaining caribou populations, but so far actions have not matched words. Cutblocks, seismic lines and roads fragment older forests and wetlands, which stimulates populations of deer, moose and the wolves that prey upon them. As a result, caribou lose their ability to minimize overlap with predators, resulting in predation of caribou far beyond what they can tolerate.

On March 5 of this year, AWA’s news release noting risks from imminent mineral rights sales of 212 square kilometres in the Redrock-Prairie Creek caribou range received wide exposure. Habitat disturbance in the Redrock-Prairie Creek range is at least 50%. Woodland caribou recovery is feasible: if managed for caribou, these west central foothills ranges (see map below) would also benefit many other sensitive species, including threatened native fish, old growth forest birds, and wetland-reliant amphibians. As in all Alberta caribou ranges, weak project-level operating guidelines for forestry and energy operations allow new surface disturbance much faster than habitat can recover. Under the federal woodland caribou recovery strategy, Alberta is required to develop range plans to achieve at least 65% undisturbed habitat per range.

A day after AWA’s news release, the Alberta government decided to postpone (but not cancel) these lease sales. AWA immediately praised this step in a second news release. However, more energy lease sales are already planned for April in Redrock-Prairie Creek and for April and May in the adjacent Narraway mountain caribou range. All new mineral rights sales in west central Alberta caribou ranges should be deferred until strong rules to protect and recover habitat are in effect. In May 2013, Alberta deferred new energy rights sales in two nearby west central populations (the A La Peche and Little Smoky) until range plans there are in place. These two range plans are the first Alberta is developing under federal caribou recovery strategy requirements; they have been promised for spring 2015.

And please send us a copy at ccampbell@abwild.ca.

Thanks for Taking Action for Alberta Caribou! 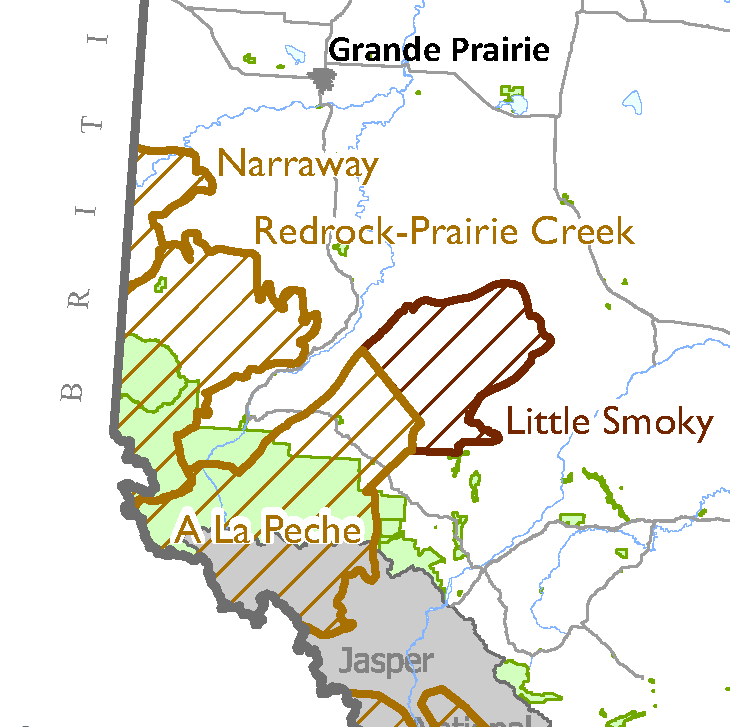