Approved and proposed logging operations immediately outside the boundary of the Willmore Wilderness Provincial Park will place  unacceptable pressure on endangered and sensitive wildlife within the park. Alberta Wilderness Association (AWA) calls on the Alberta government to halt logging in endangered west central caribou ranges and implement a long overdue comprehensive management plan for Willmore.

“The Willmore Wilderness Park is a great example of the kind of protection that is needed for the headwaters of Alberta’s eastern slopes,” says Sean Nichols, Conservation Specialist with Alberta Wilderness Association. “But that protection is undermined when industrial development is allowed right up to the park boundary without any kind of buffer for the park’s wildlife. We are very concerned that endangered species like the mountain caribou will not have the intact foothills habitat they need to survive.” Activities such as commercial forestry result in increased access to those wilderness areas, and degraded habitat for resident wild species.

Established by a legislative act in 1959, the 4600 km² Willmore Wilderness Park, lying between Jasper and Grande Cache, celebrates its 55th birthday this year. Yet despite that lengthy history, there has never been a comprehensive management plan for the park. A preliminary management plan was produced in 1980, but never completed or released. This was followed only by a wildfire management plan in 2006, with nothing since.
The Willmore Wilderness Park is home to several wild species found in Alberta’s listing of Species At Risk, including mountain caribou, grizzly bears and wolverines. The park is also home to other sensitive species such as mountain goats and bighorn sheep. While the Willmore Wilderness Park Act is a strong piece of legislation that appropriately bans industrial activity within the park boundaries, it needs to be complemented by a management plan that addresses issues including habitat security for wildlife.

At present the Willmore Wilderness Park is adjacent to forestry tenure agreements held by four companies: West Fraser, Alberta Newsprint Company (49% owned by West Fraser), Foothills Forest Products, and Weyerhaeuser. Large cutblocks approved or proposed for harvest within the next decade line over 10 km of the park’s boundary. These new cutblocks will increase the risk of off-highway vehicle and predator access in formerly remote areas of caribou  range.

In 2013, in response to the woodland caribou being designated as endangered, the Government of Alberta placed a deferral on industrial development – including logging – within the range of the Little Smoky herd, 29km northeast of the park. However no such deferral has been implemented for the A La Peche or the Redrock-Prairie Creek herds, whose ranges overlap with the park, and whose members have traditionally migrated in and out of what is now designated the Willmore Wilderness. 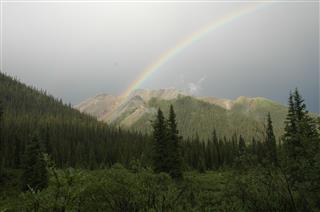